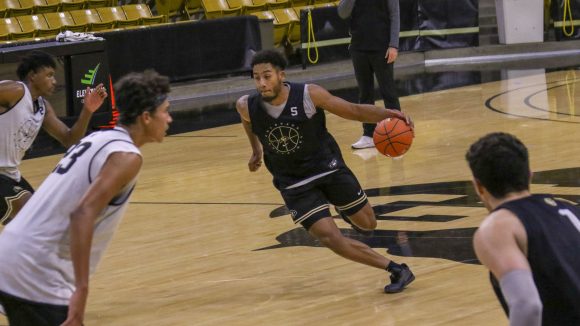 Nearly two weeks of official practices are complete for head coach Tad Boyle and the CU Buffs men’s basketball team. Even though Boyle said day one felt like day four or five, the Buffaloes started formal preseason practice on Oct. 14. A year ago, Colorado brought a multitude of upperclassmen off the bench, which is something Boyle had previously referred to as “quality depth.”

This season, the Buffaloes head coach said that will change to some extent because Colorado had the luxury of bringing juniors and seniors off the bench last year, whereas this season it’ll likely be newcomers and underclassmen filling the reserve roles. Positions that were once occupied by upperclassmen like then-junior guard Maddox Daniels and former forward Lucas Siewert will now most likely be filled by freshman.

“This year, our depth is going to be based on a lot of younger guys. It’s still quality because we got some talented, talented guys, there’s no doubt about it,” Boyle said. ” It’s just they’re a little bit younger so the experience isn’t there and therefore you get more mistakes, (and) you get more maybe inconsistencies but we got guys who can make plays.”

Boyle continued to differentiate this season from years past due to the condensed non-conference schedule, which puts pressure on the younger guys to progress quicker than usual with less “buy” games to ease the transition into the upper-tier non-conference opponents and then Pac-12 play. The team does not have 13 non-conference games but instead a compressed schedule with seven non-conference opponents, two of which are accounted for when Colorado travels to Manhattan, Kansas to play South Dakota State and Kansas State to open the 2020-21 campaign.

“Those games are so critical in developing depth because you can get away with that with some younger guys and give them some minutes and let them play through some mistakes and learn from things,” Boyle said. “Whereas when it’s a compressed schedule, you open up a South Dakota State, guess what, we don’t have that luxury, you play K-State the second game. You do not have that luxury of developing that depth.”

One of those younger players who will likely come off the bench to spell senior guard McKinley Wright IV is redshirt freshman guard Keeshawn Barthelemy. The Toronto, Ontario native reclassified in 2019 in order to spend last season as a redshirt with the Buffaloes. Barthelemy said last season gave him a chance to focus on understanding and adjusting to basketball at the collegiate level.

“My redshirt year was a great year,” Barthelemy said. “It was a learning year for me, just learning from everybody and that just naturally came about competing with other guys and other guards and learning how to play with the bigs. It was great for my development.”

“Personally, (practicing) alongside McKinley (Wright IV) was great for me, just learning from a great point guard in college basketball,” Barthelemy said. “Playing alongside him will be great for our team. We can play up-tempo and just run with the guys.”

As far as adapting to the college game, Barthelemy said the most notable adjustment has been the level of competition, which makes it difficult on both ends of the floor. He also added getting through ball screens is something he’s improved on since arriving on campus.

“I feel like I’ve gotten better,” Barthelemy said when asked about his progression since 2019. ” Practices have been really great for me and my development, but I’m still working towards being a great on-ball defender and being able to get through screens as well.”

Frontcourt depth is something that will have to be addressed early for the Buffaloes. On paper, it looks like Boyle has his replacement for former forward Tyler Bey in 6-foot-7 forward Jeriah Horne, who transferred to Boulder after graduating from Tulsa in May. However, replacing Bey’s production can’t fall on one guy. Senior forward Alex Strating has been productive in spurts for Colorado and in the past may see an increased role this season in relief of Horne. In addition, a pair of freshmen forwards, Jabari Walker and Tristan da Silva, may see more minutes than usual because of the NCAA’s decision to not count the 2020-21 season toward eligibility.

Walker, a native of Los Angeles, has the length and athleticism to provide a versatile threat at forward and help aid the loss of Bey. When asked about the most difficult aspect of transitioning to college basketball, Walker said without a doubt it was the increased physicality.

“The main thing is the physicality of these guys are stronger, it’s mostly a team filled with seniors,” Walker said. “They’ve been in the weight room four more years than I have and just adjusting to the physicality and up and down pace at this level I think has been the biggest thing for me.”

As Walker and the rest of the freshman class gradually grow their confidence and develop in the weight room, it should be interesting to see how large of a role the newcomers play throughout this season in replacing Colorado’s departed talent from a year ago.