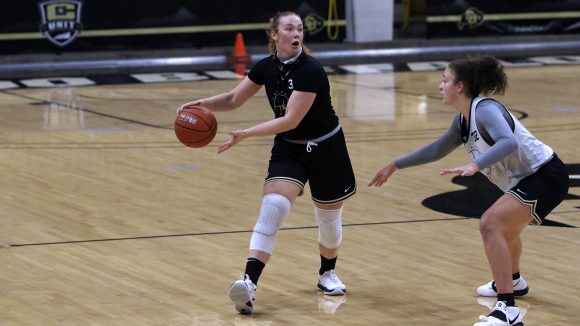 Head coach JR Payne and the University of Colorado women’s basketball team were not certain that incoming freshman Frida Formann was going to be able to get back into the country in time for fall camp. The American embassy in Formann’s home country of Denmark was closed for months because of lockdowns and construction. Although Formann was eventually able to enter the U.S. for her freshman season, this example only signifies the new reality college coaches face during the coronavirus pandemic. Payne and her Buffs have not been immune to these challenges and are adjusting their lives and training in hopes of having a breakthrough season.

As the Buffs prepared for their season over the summer, an array of situations made training difficult for some more than others. While players staying in Boulder were able to use facilities to train with small groups, those who left for home had to make do with what they could.

Senior guard Mya Hollingshed’s grandmother bought her the first basketball hoop she ever owned to train on at home in Houston. Junior guard Lesila Finau returned home to the Bay Area in California, where some of the strictest COVID-19 restrictions were present.

Payne said that Finau was forced to improvise at times, “nothing was open, so she (Finau) had to run hills with her sister and her brother.” These varying circumstances didn’t improve with the Boulder County Public Health Orders limiting the ability to train and prepare for the regular season.

Because of coronavirus related delays, a shortened pre-season schedule has left the Buffs playing catch up to prepare for the regular season tipping off as soon as Nov. 25. In a normal year, players can start conditioning for the season prior to the start of pre-season, which leaves more time for perfecting strategy and the finer points of the game. However, in this wacky world of COVID-19, the team conditioning aspect has reached its way into training camp.

“We are getting up and down (the court) some and we are doing more running than we would normally do at this point in the year,” Payne said.

CU’s physical preparation and basketball training having to be crammed together for maximum efficiency is not ideal, but Payne is still staying positive.

“I feel good about where we are,” Payne said. “But we need to balance how much we need and how sore their bodies are.”

Despite the changes in everyday habits for a team that hopes to break through in 2020 after slim losses to No. 8 UCLA and Stanford (who was No. 6 in their first meeting and No. 8 in their second) last season, Payne’s Buffs have embraced getting back on the court as a victory in the return to normalcy.

“Other than the masks, it really doesn’t feel any different than any other fall practice sessions,” Payne said.

While this may be surprising to some, being able to come back as a team and having a chance to compete allows the worries of the world outside the walls of the CU Events Center to fade away, even with the unseen faces of fellow teammates.