“Vote or die, for real”: CU Program Council hosts CU at the Polls with Ilana Glazer and Princess Nokia 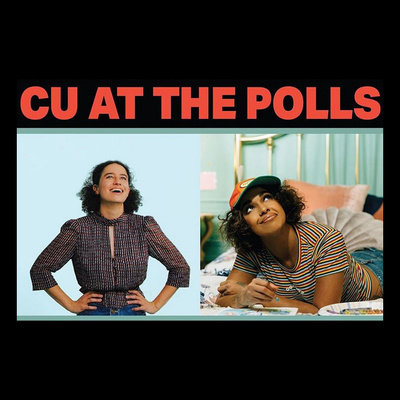 For Ilana Glazer, getting young people involved in the political process is more important than ever for this 2020 election. Monday night, the comedian now turned political activist spoke as part of the CU Program Council’s virtual “CU at the Polls” voter registration event. Also included in the event, which was live streamed on Youtube, was a performance by rapper Princess Nokia along with a brief presentation about voting in Colorado from New Era Colorado.

During the discussion, Glazer spoke at length about Generator, the nonprofit organization she co-founded in 2016, aimed at making political discussions more accessible to younger people. She said the Generator collective is a place to talk about politics and government “without feeling foolish” and that it aims to “humanize policy” in a way that resonates with millennials and Generation Z. Generator’s Instagram posts provide bottom line tools that tell followers which candidates will best address the issues that are most important to them.

The collective also includes a web series called Cheat Sheet for the Voting Booth hosted by Glazer where she and celebrity guests discuss progressive candidates up for election in swing states.

Generator’s main goal is to encourage young voters, who are often wary of politics, to participate in the electoral process.

One of the biggest reasons young people are turned off from voting is that they are disillusioned with the political system. Chavous explained that liberals in particular feel that they are not well-represented by the supposedly “more progressive” Democratic Party, which has not always acted with the best interests of its constituents in mind. Glazer acknowledged this disillusionment and said that she too finds the Democratic Party extremely problematic but that ultimately, the best way to affect change is through the existing system.

“Personally I vote for the most progressive candidate,” said Glazer, who did not shy away from expressing her political views during the discussion. “Progressive values are human rights politics.”

She called the first presidential debate “painful to watch” and noted that she is uncomfortable with the way mainstream comedy platforms like Saturday Night Live have been portraying the debates. Glazer, who is a well-known comedian, said that comedy has to be more thoughtful because the stakes are so high in this election year.

For Glazer, choosing between Joe Biden and Donald Trump isn’t a matter of political ideology; it’s a matter of losing or retaining certain rights for entire groups of people. Columbia Law School’s Trump Administration Human Rights Tracker confirms that over seventy acts carried out by the Trump Administration have targeted the human rights of various groups of people, from LGBTQ individuals to immigrants.

While her message on the Generator Collective website acknowledges that Biden is not the “sexiest” candidate, Glazer laid out her support for him and his running mate Kamala Harris in no uncertain terms during CU at the Polls. Through her work with Generator, Glazer has pushed for other public figures to come out and advocate not only for getting out the vote, but getting out the vote for Biden.

The New Era Colorado organization is not so outright in its political endorsements and mainly focuses on getting young people registered to vote, although the group does support more progressive policies. Following the discussion with Glazer, New Era’s Organizing Manager for Boulder gave a short presentation with information for Colorado voters that included where to vote, how to register, and deadlines for voting by mail and in-person. She emphasized the importance of this year’s election, and highlighted issues on the ballot such as reproductive rights, climate change, and immigration.

The event concluded with a virtual concert by Princess Nokia, who performed some of her biggest hits including “Green Eggs & Ham” and “Gemini,”  from her recent albums, “Everything is Beautiful” and “Everything Sucks.” The performance, which took place in front of a small group of people, showed the rapper in front of a wall of graffiti that urged viewers to get out and vote.

Princess Nokia ended the night with a simple message: “Vote or die, for real.”