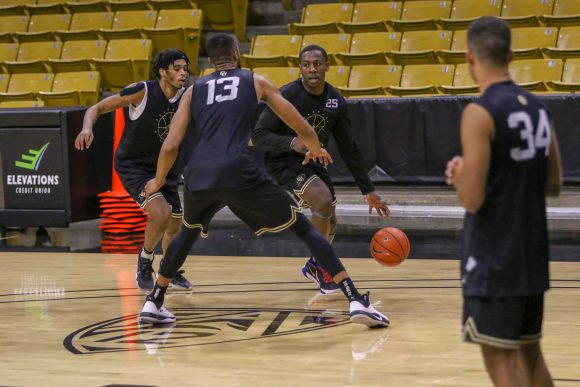 The first two official days of preseason practice are in the books for University of Colorado men’s basketball head coach Tad Boyle’s squad. Unprecedented summer and fall workout sessions, due to a multitude of restrictions put in place to try and mitigate the spread of the COVID-19 pandemic, have created a unique feeling for both coaches and players heading into the Buffaloes’ 2020-21 campaign.

Boyle likened the premature ending to the 2019-20 season because of COVID-19 to the rollercoaster many players go through when suffering an injury. The 11th-year Colorado head coach said it’s taught both the coaches and players to never take a day together on the court for granted. It was especially agonizing because last year’s Buffs (21-11, 10-8 Pac-12) were positioned for an NCAA tournament berth even after suffering five straight losses to finish the season.

“We talk about cherishing the moment and appreciating every day,” said Boyle following Wednesday’s first official practice. “Every day you step on the floor, it could be your last for the season or certainly for the week or whatever the case may be. I think when the whole NCAA Tournament got taken away from our guys, it was an eye-opener. It was painful because they’d worked so hard to get there. And then the offseason, there was so much uncertainty that I think all of our guys all had that perspective now, whereas in the past maybe just some of the guys that have been injured had that perspective. Now everybody has it. It’s incumbent among us as coaches and certainly out players to step out on the floor with that in mind and compete and appreciate every single day.”

Boyle emphasized the importance of guys making good decisions off the court because of the risk and consequences of positive COVID-19 tests. As Colorado’s season opener on Nov. 25 against South Dakota State in Manhattan, Kansas approaches, the repercussions of a mandatory two-week quarantine become more and more detrimental.

“The risk for our players is not when they’re in our facilities, I mean we’ve proven that since June 7,” Boyle said. “The risk to our players is when they leave our facilities and they’re going out in the community or staying safe in their apartments, in their dorm rooms, whatever the case may be and making good decisions and acting respectfully and responsibly. I knock on wood when I say this, but they’ve done an unbelievable job of that, but we’re going to have to continue to because if we get close to the season, we’ve been able to absorb two 14-day quarantines for partial pieces of our team and the 14-day non-gathering order from Boulder County. We’ve been able to overcome that. But going forward, it would be really, really difficult for us to overcome a situation where we had multiple guys quarantined for 14 days because every practice now is critical for our development of putting a team on the floor that can represent the University of Colorado the way we want to do that.”

Pandemic risks aside, Boyle said this year’s team can put itself in position for a postseason tournament berth come Selection Sunday in late March. Despite the departures of Tyler Bey, Shane Gating and Lucas Siewert, the potential exists for the Buffaloes to reload and prepare for another run.

Boyle said he believes this is a NCAA Tournament team. Now, they have to prove it.

We’ve got veterans that have been here, done that and we’ve got a group of freshman who’ve not. But, the freshmen are really talented,” Boyle said. “They’re very competitive and the one thing that I’ve noticed in our first four or five workouts here as a team together that I love about our freshman is that they’re not scared.”

Colorado will be led by a handful of seniors in guard’s Maddox Daniels and D’Shawn Schwartz, forward Alex Strating, center Dallas Walton, graduate transfer forward Jeriah Horne and guard McKinley Wright IV. Wright IV said the 2020-21 season will be his “last ride” despite the NCAA’s recent decision to not count the upcoming season toward eligibility. The blend of youth and veteran leadership is something Boyle has had experience in the past, most notably four years ago when Wright IV, Schwartz, Bey and redshirt junior forward Evan Battey were freshmen. Schwartz said the 2020 class feels similar from a talent standpoint to his class.

“It’s kind of reminding me of 2017,” said Schwartz when asked about the freshmen. “The guys just came in, they’re (a) really tight-knit group. They have high expectations for not only each other but this team and are really competing against us older guys and that’s something that’s been really good for us.”

Wright IV echoed similar sentiments regarding the freshman. He said they’ll play a critical role in putting CU in a similar position to where they were last March. The senior guard went a step further, promising an NCAA Tournament berth assuming COVID-19 doesn’t force a premature ending again.

“We’re fired up,” said Wright IV. “We have a lot of young guys that are going to help contribute to this team and get us back to where we want to be. Obviously, the end we had in Vegas (in the Pac-12 tournament) wasn’t what we wanted, but we were excited to start our new season which was the NCAA tournament and that got cut short. I haven’t played there yet, but I can guarantee, I can make a promise that we’ll be back there this year and we’ll be dancing, so we got another shot at it.”