Buffs roaming strong across the NFL 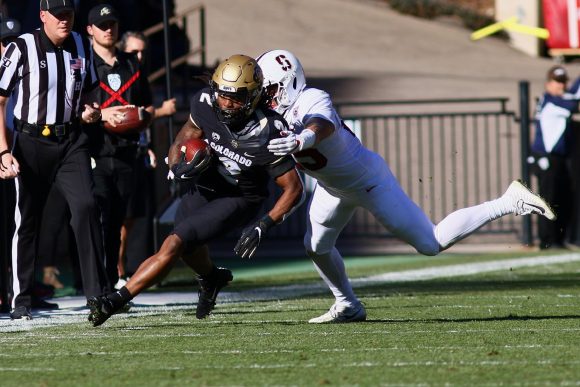 Although the University of Colorado football team will not kick off until Nov. 7 vs Stanford, that doesn’t mean that the Buffs aren’t getting action on the field. Nineteen former CU players are currently employed in that capacity by NFL teams, with 10 on active rosters. With football still a few weeks away from coming back to Boulder, let’s take a look at what’s going on with some of Folsom’s favorite alumni that have made the transition to the bright lights of the pros.

Down in the Sunshine State, wide receiver Laviska Shenault Jr. has been flourishing in his first season with the Jacksonville Jaguars. A second-rounder of this year’s draft, Shenault has brought the same know-how and athleticism that made him a stand out here in Boulder. With 23 receptions and 270 receiving yards through week 5, he ranks second and third amongst rookies from a stacked class coming out of college in this last year. Although the Jags are struggling this season with a 1-4 record, the 22-year-old’s future is looking very bright as the CU standout tries to become a star amongst the professional ranks.

Meanwhile, running back and Denver’s hometown son Phillip Lindsay, is back from injury and ready to roll. After being snubbed by all 32 teams in 2018’s NFL Draft, Lindsay signed on as a free agent with the Denver Broncos and proceeded to become the first undrafted rookie in league history to be selected to the Pro Bowl. Following two consecutive 1000 yard rushing seasons to begin his career in the Mile High City, “The Tasmanian Devil” has been sidelined with turf toe since the Broncos’ week one clash against the Tennessee Titans. The now third-year tailback said he’s “100%” ready to return week in Foxboro against Bill Belichick’s New England Patriots, hoping to improve Denver’s 1-3 record.

Up in the not-yet frozen tundra of Green Bay, Wisconsin, two seasoned Buff veterans have helped the Packers to a sparkling 4-0 start. In his fourteenth season, Mason Crosby has continued to be one of the most consistent placekickers in the game, hitting a perfect 7-for-7 on field goals and 16-of -17 on extra points this year. On the offensive line, tackle David Bakhtiari has continued to be one of the finest in the game in protecting quarterback Aaron Rodgers. Coming out of CU in the 3rd round of the 2013 Draft, Bakhtiari is coming off a stellar 2019 season where he was named to his second Pro Bowl. These two will likely continue to shine for years in America’s Dairyland.

Scattered across the pros, four members of CU’s stellar 2016 defense prowl the league’s secondaries. Cornerbacks Isaiah Oliver, Ahkello Witherspoon and Chidobe Awuzie join strong safety Tedric Thompson as defensive starters in Atlanta, San Francisco, Dallas and Kansas City after bringing a Pac12 South title to Boulder just four short years ago. Awuzie was recently placed on injured reserve after the Cowboys’ week two matchup against the Atlanta Falcons with a hamstring injury but may return in the next couple of weeks as Dallas stands at the top of the NFC East. Thompson’s Chiefs are coming off a win in Super Bowl LIV and have raced out to a 4-1 start while Oliver’s Falcons are on the opposite end of the spectrum at 0-4.

Finally, two more recent familiar faces are still waiting for their shot in our nation’s capital. Buffs 2019 starter’s quarterback Steven Montez and wide receiver Tony Brown are on the practice squad for the Washington Football Team after going undrafted in this year’s draft. Following the benching of starter Dwayne Haskins last week, fourth-stringer Montez got snaps ahead of Haskins in team practice alongside new starter Kyle Allen and backup Alex Smith.