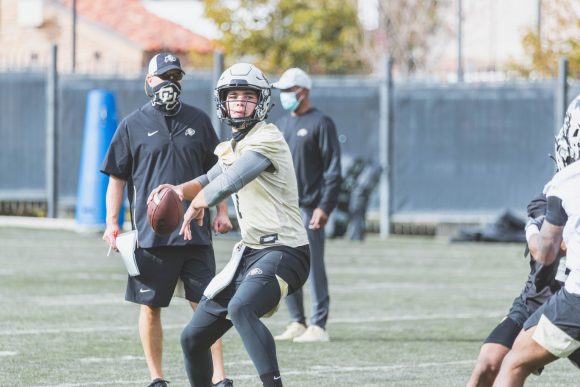 The seven-year period of peace at the quarterback position has come to a close at the University of Colorado. Going back to Sefo Liufau’s emergence in 2013 and the transfer of power to Steven Montez in 2017, Head coach Karl Dorrell now has a decision to make in 2020.

Fifth-year senior Sam Noyer, who played four games at safety for CU last year and was initially set to depart CU upon graduation last spring, and junior Tyler Lytle will compose Dorrell’s ballot this fall. While they’re both upperclassmen, neither has started a game at QB for Colorado and both have limited time in relief for Montez the past two seasons.

“They (Noyer and Lytle) have some experience with the season with how fall camp goes, with how the game week goes, how the preparation goes, but neither of them played a lot of football,” said CU quarterback coach Danny Langsdorf. “We’re going to have some growing pains with that here and there and we’re going to try to eliminate that as best we can and get them up to speed.”

Dark horse candidate freshman Brendon Lewis has impressed during fall camp but is still behind Noyer and Lytle in getting reps with CU’s primary units, according to Langsdorf. With some QB saturation, Langsdorf has made adequate repetitions a priority in preparation for week one.

“One thing about trying to rep too many guys is we need to get a guy ready to play in a game,” said Langsdorf, who joined Dorrell’s staff in March. “We’ve been really featuring Sam (Noyer) and Tyler (Lytle) that way, giving them a lot of good work. We’ll continue to do that for a while until we start to separate a little bit.”

Noyer said his experience at safety last year was beneficial for his “knowledge” of the game and he’s not worried about the sudden move back to QB.

Noyer said that offensive coordinator Darrin Chiaverini and Langsdorf helped persuade him to stay at CU and return to quarterback for his final year of eligibility.

“I’m glad we got him back (at QB),” Langsdorf said. “I think he’s competing and playing. He hasn’t missed a beat in terms of the quarterback part of his job and we’re just getting them up to speed with any of the changes (in) terminology and things that we’ve made from last year.”

For Lytle, he has approached fall camp with the goal of being a leader.

“Since I’ve been here, I’ve tried to be a leader by example,” Lytle said. “I think definitely this year I’m trying to be more vocal and trying to really lead the offense and get guys going.”

Langsdorf highlighted Lytle’s attention to detail and preparation, both of which are imperative at the QB position.

“Tyler’s been really, really sharp,” Langsdorf said. “(He has a) good knowledge of football and different systems and (I’ve) been pleased with how he (has) worked. He does a great job preparing and being ready to go each day studying the script, studying the playbook, just being ready to go each day. I’ve been pleased with that. He’s got a hunger to play being a backup for a little while.”

He added that although CU doesn’t have an exact timeline of when the polls will close, but he hopes it will be soon in preparation for the Buffs Nov. 7 opener.

“It’s a close competition so we don’t want to rush it,” Langsdorf said. “But at the same time, we want to get going and get the guy that’s going to be the starter most of the reps getting ready to play a game.”