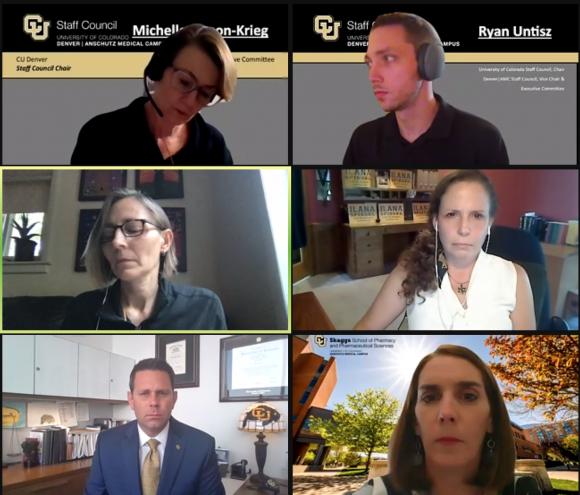 Murray earned both his undergraduate and law degrees from the University of Colorado Boulder and acted as tri-executive during his time at the university. He was the managing editor of the environmental law journal and now works in private law practice.

Over the past several years, university tuition across the United States and at CU has increased dramatically.

“It’s just not a sustainable model. We have an entire generation of students who are literally taking out a mortgage on their future to get a bachelor’s degree,” said Murray, pointing to his own experience with student loans. Murray has children he hopes can attend CU in the future.

Murray proposed lowering the cost of services and renegotiation of third-party contracts to address budget cuts. He hopes to work with legislators to increase state funding, and to work with CU alumni and business communities to secure additional scholarship, endowment and grant funds.

“I’ll encourage partnerships between CU and business and industry to produce STEM degrees through innovative apprenticeships and co-ops,” Spiegel said.

In regard to budget cuts from decreased student enrollment, Spiegel suggested cutting middle and higher education, but being mindful of the effects in an already fairly bare administration.

“We must fundamentally reform our system for financing higher education,” she said.

The candidates spoke to how they would address systemic barriers for DACA students.

“CU welcomes our undergraduate and our graduate students (and) our postdoc scholars regardless of immigration status,” Murray said.

Murray cited a resolution passed unanimously by CU regents a few years ago supporting ASSET and DACA students as well as the establishment of the University of Colorado Student Relief Fund as major progress.

“The university does offer a variety of resources already, but we could do a better job,” he said.

“We must ensure that private scholarships and institutional aid are accessible to all students who need support, including our dreamers,” Spiegel said.

“Our Dreamers deserve regents who will work to remove these barriers,” she said.

Following demands by student groups for increased diversity on CU campuses, divestment from police, and investment in resources for CU’s BIPOC students, the regent candidates discussed their ideas for making CU more diverse and equitable.

“In the words of professor (Ibram X.) Kendi, ‘One either allows racial inequities to preserve as a racist or confronts racial inequities as an antiracist,’” quoted Spiegel. She suggested pay equity analyses and assessment of the effectiveness of existing training and professional development programs.

“We can develop new and mandatory training programs for faculty and staff that focus on antiracism and anti-bias,” continued Spiegel.

Murray also emphasized the importance of building a welcoming community for BIPOC students.

“The sense of belonging is essential to fostering and improving a system that is more diverse, more equitable and more inclusive,” Murray said.

Murray pointed to his service as tri-executive at CU, that administration’s commitment to diversity and the implementation of SORCE (the Student Outreach Retention Center for Equity). He hopes to build on those efforts as a regent.

The candidates discussed the importance of shared governance as a regent.

“I personally believe that the best practices for governance for a large institution that has campuses in multiple cities and different administrations at those campuses should involve and engage the stakeholders in the matters,” Murray said.

Murray emphasized the importance of collaboration among those governing as well as with students and staff depending on the nature of the decision.

“Shared governance means that the administration will listen to and work in tandem with students, staff and faculty — specifically, this means demonstrating respect for students respect for staff,” said Spiegel.

If you have any questions for the candidates you can contact Richard Murray at richard@murrayforcuregent.com and Ilana Spiegel at ilana@ilana4regent.com.