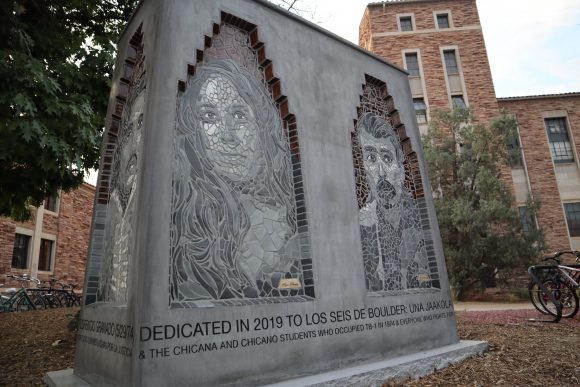 The sculpture in front of Temporary Building No. 1. Each mosaic is encircled with a text dedication to the members of Los Seis. Sept. 3, 2019 (Robert Tann/CU Independent)

The University of Colorado Boulder announced Wednesday that the Los Seis de Boulder sculpture located outside of Temporary Building No. 1 on campus will be displayed there permanently and made part of the University Archives Collection of Distinction.

The sculpture memorializes Una Jaakola, Reyes Martinez, Neva Romero, Francisco Dougherty, Heriberto Teran and Florencio Granado; Boulder activists who were killed in two different car bombings in May of 1974. The case of the bombings, in which another activist named Antonio Alcántar was seriously injured, was never officially solved.

“The story is essential to understanding CU Boulder,” said Jasmine Baetz, the project’s sculptor and 2020 CU Master of Fine Arts graduate who learned of Los Seis in 2017. “It was pretty striking to learn that six students and activists had been killed in circumstances that were never really investigated or cared about by the institution.”

Los Seis or “The Six”, a mix of CU students and graduates, were early members of the CU student group United Mexican American Students (UMAS). Today, the group’s legacy is carried on by UMAS y MEXA, a coalition of Latinx and Chicanx students.

The Los Seis sculpture, which was constructed in 2019, was originally going to be taken down after 180 days per campus policy for public art installations. However, following demonstrations throughout early 2020 by members of Boulder’s Chicanx community and their allies, the University eventually agreed to make it a permanent fixture and worked to integrate it into the archives collection.

Jaqueline Rangel, a sophomore at CU and a member of UMAS, was present at the unveiling of the piece early last year. She said, “being able to see that sculpture come to life just kind of felt surreal,” and that seeing the sculpture made her feel more connected to campus.

Outside of UMAS y MEXA, few people are aware of how involved CU students were in the Chicano Civil Rights Movement during the 1970s. When the bombings happened, UMAS was staging an occupation of Temporary Building No. 1 to demand that the university fund more programs promoting the enrollment of Chicanx and other minority students. It was important to Baetz to place the sculpture outside of the building in order to honor the legacy of the student-activists.

As part of CU’s Collections of Distinction, it is not mandatory that the sculpture be moved. The university will take on a custodial position providing maintenance to the piece itself as well as taking an active role in educating the campus community about the story of Los Seis according to Megan Friedel, the Head of Archives within the Collections of Distinction in the University Libraries.

Friedel wants to eventually develop “a really robust” digital collection that documents Chicanx history on campus and the history of Los Seis de Boulder. The department is hoping to draw more attention to events in CU’s history that have not been previously acknowledged by the university, starting with Los Seis.

Dean of University Libraries and Senior Vice Provost of Online Education Robert McDonald said that this is the first big attempt by CU to fill in some of the existing “holes” in its archive collections. The department is committed to collecting more materials that document not only the Chicanx civil rights movement but also other significant pieces of Black Indigenous People of Color (BIPOC) history.

Baetz, who created the sculpture in conjunction with members of CU’s Chicanx community, emphasizes that “it is important to celebrate and acknowledge the contributions of BIPOC students who have been doing the heavy lifting of pushing the University forward.”

Antonio Lopez, whose uncle Reyes Martinez was one of Los Seis, called the decision to make the sculpture permanent a step in the right direction but acknowledged the context surrounding the current moment. He considers the move to be in some ways “lip service” on the part of CU in the face of a national reckoning surrounding race.

Rangel echoed this, saying “there are so many more demands that still need to be met (by the university).” She cited efforts by Diversify CU Now, the Black Student Alliance and the CU BIPOC Student Coalition to hold the CU administration accountable as being critical to getting these demands met.

While there is still much work to be done in addressing racial injustices at CU and beyond, the university’s choice to make the Los Seis de Boulder sculpture a permanent part of campus is a solid starting point for many.

As Baetz put it, “In remembering the past, we can transform how we deal with the present.”