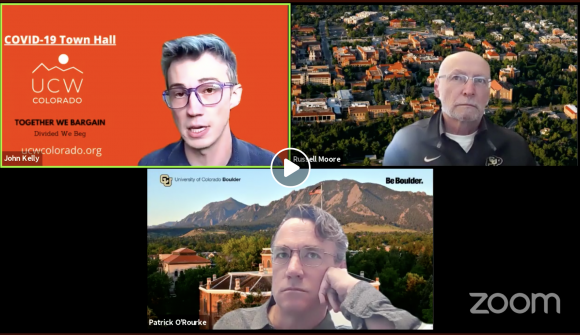 UCWC member John Kelly moderated the discussion which included a broad range of questions asked by students, staff, workers and community members regarding COVID-19 testing, CU’s vulnerable populations and in-person class instruction. Kelly began by explaining that the UCWC is a Colorado chapter of a national union and is wall-to-wall, meaning its members include workers of all kinds such as campus workers, faculty, graduate workers, researchers, student workers and undergraduate workers.

“We really want to do that to make a united front to make sure we have our positions heard and that we have workers elevated in a meaningful way,” Kelly said.

Central to the larger conversation was the list of demands that the UCWC sent to the Regents prior to the beginning of the school year for a safe and equitable reopening; demands which Kelly described as being “basic necessities.”

“I know we’ve had a few days without any updates after a long weekend where we saw a record number of cases in Boulder,” explained Kelly. “So, did we stop testing that weekend, do we have those numbers, and how do we get those?”

“How timely we can update the dashboard is just dependent on how fast we get the results,” he said. “So, typically during a weekday and on a Saturday we’re pretty up to date on inputting the data.”

He also urged those listening to realize that the update process is not just what he described as a “binary function” where one gets tested, the university gets the results and then posts the results. “Some of these tests lead to more complicated testing protocols and paradigms, but we’re doing our very best to be absolutely transparent and posting the data as well,” he said.

O’Rourke added that there have been changes to the dashboard in the last week to provide better insight into overall comprehensive numbers. However, he also urged those in attendance to consider that the university uses different testing modalities.

“Part of what we’re trying to do is make sure that when we’re posting data… it’s accurate and we’re not ending up in a situation where we might be undercounting or double counting results,” O’Rourke said. “The other thing we know is that there are other tests that may be reported into the county or that are done in other localities that don’t end up in our testing data. So there are moving pieces, but we’re trying to reconcile all of those to give the best overall picture of what we know is happening on campus.”

Callie Rennison, CU Denver professor and candidate for regent to represent CU Boulder joined the Zoom chat, prompting Moore and Russell to speak to those who believe CU to be putting its budget health over the lives of its students, staff, faculty and other workers.

“I think there was an inference that we’re putting workers in an unsafe condition and we don’t believe that’s the case,” Moore said. “Fact of the matter is, there is no data yet to suggest we’ve been transmitting any virus through work functions.”

Similarly, O’Rourke explained that he felt that it is an “inaccurate portrayal” to say that the campus has prioritized the budget over health and safety.

“In fact, the campus has made really vast investments in order to maintain health and safety,” he said. “The testing capacity that we have built is unrivaled anywhere else in the state. We have more people doing contact tracing than the county itself has for cases that arise on campus.”

Regarding the budget, O’Rourke explained that the budget realities that the university is facing are real.

“We have declined in enrollment, we have millions in expenditures that we’ve incurred and there is a lot of uncertainty about what our budget future will be,” he said. “We don’t look forward to any of those types of measures. But we’re trying to do that in a manner that recognizes that we have to work within the budget constraints we have.”

Tracy Ferrell, senior teaching faculty in the department of Writing and Rhetoric, joined the discussion to share her experiences with in-person teaching. She explained that she is currently teaching three in-person classes and finds it “nearly impossible” to teach her classes with all of the restrictions in place including masks and social distancing and said that her Zoom class over the summer was more successful. To which she begged the question: “why does the administration feel it is worthwhile to still have classes in-person?”

Moore responded, “At the departmental levels or unit levels… it’s ultimately up to them to make decisions as to what is pedagogically the most effective for the students. But there was also a strong desire from our students and a number of faculty as well to have an in-person experience. That authority was actually given to department chairs, deans and folks that actually know best about how to conduct their business.”

One of the last questions came from CU Boulder researcher Lupita Montoya whose question largely focused on the Environmental Health and Services workers, whom she explained are CU’s most vulnerable population, questioning how often these workers get tested as well as what these numbers show.

O’Rourke responded by assuring that the results can be made available. He also compared the university’s incidence rates on “Hispanic people” with the county, explaining that the university is not seeing as disproportionate of rates.

“Well, that’s nice to know, but I still haven’t gotten the answer to my question which is; how often are you testing these people and what is the data actually showing?” asked Montoya. “Remember, I’m a professor… if I ask my students and they don’t answer, they literally get a zero.”

“This is something that you were asked on Tuesday already from the city… If you continue to give obtuse responses, then I don’t think you keep people confident that you are taking care of these vulnerable populations,” Montoya continued.

Some attendees praised Moore and Russell in the comments section for answering these questions saying, “kudos to CU for being so receptive.” Although others were more skeptical.

“Why is the CU COVID dashboard split by week?” One commenter questioned. “Wouldn’t it be easier to understand if it were a rolling graph?”

This article does not cover all of the content in the meeting. To watch the entire town hall meeting, visit UCWC’s Facebook page.