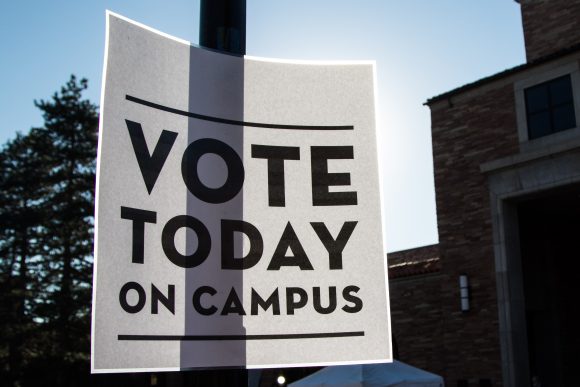 In this ever-important election year, the University of Colorado Athletics Department is doing its part in highlighting the importance of voting to its student-athletes.

CU is in unison with the Pac-12’s campaign to promote social justice and anti-racism efforts and beyond that, CU Athletic Department leadership and student-athletes recently formed CUnited.

Led by chair members and Associate AD Lance Carl and Rachel Walker, CUnited works to promote racial and social change in the CU community. Its objectives include mandating annual anti-racism training, voting initiatives, to “bridge the chasm” with local law enforcement and to work with other campus organizations.

Voting is a powerful catalyst for change and CUnited plans to hold three sessions on Sept. 8, 9 and 10 to educate and help register student-athletes, coaches and staff to vote.

Student-athletes, and professional athletes to a larger extent, have a pedestal of opportunity to have their voices heard. Likewise, CU student-athletes, including junior lacrosse goalie Molly Galloway, will not take their suffrage for granted in 2020.

“At the root of voting is education, and it is imperative that CU helps student-athletes identify their positions on the issues that our country faces,” said Galloway, who is one-of-seven student-athlete members of CUnited. “We have an opportunity as young people to make our voices heard and make a change in our communities. Democracy only goes so far as to represent those who choose to participate in it. So, I implore my coaches, teammates, support staff, and fellow student-athletes to be proactive in the 2020 election and beyond.”

Coaches have the responsibility to be positive role models for student-athletes and head football coach Karl Dorrell and head women’s basketball coach JR Payne implore their players to be role models themselves.

“We need to educate and empower our young people so they understand they are the future of our country,” Dorrell said. “Their significance should not be underrepresented in this year’s election. It is our job as coaches to empower these men and women to understand that they are the agents of change.”

Payne added, “For many student-athletes, this might be the first opportunity they have to participate in the election process, and I am incredibly proud that everyone in our program is already registered to vote. Our students know that many of our ancestors sacrificed so much for us to have this right, and we will certainly be making our votes count this year.”

Get to know the CU Buffs defense

Buffs roaming strong across the NFL