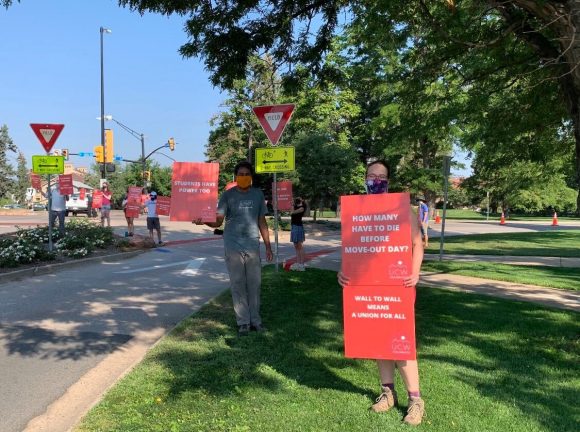 United Campus Workers Colorado (UCWC) sent a letter to the the University of Colorado Board of Regents along with a list of conditions for a safe and equitable reopening, asserting that they be met come the start of the 2020 fall semester.

Although the letter praises some of the university’s efforts, it identifies what the UCWC deems as shortcomings in protecting campus workers and the community at large.

“Workers of the university and many of the students and community members have very significant concerns about the plans for reopening campus,” said Alex Wolf-Root, president of UCWC and adjunct lecturer in the University of Colorado Boulder’s philosophy department. “Both with the lack of transparency on what those plans are and with some of the specifics of those plans.”

A throughline of the letter to the board was the UCWC’s plea for increased transparency with the community.

Under its conditions, the UCWC proposed that CU publicize a daily report of COVID-19 statistics, create an accessible database of each department’s instructional plan, publicize a clear system-wide criteria for when instructors are authorized to move their in-person classes online and to establish as well as publicize clear metrics to determine when all in-person instruction will move online prior to fall break.

“The university is entirely dependent on its workers to run,” said Madeline Pettine, undergraduate at CU Boulder and member of UCWC. “Because CU has elected to keep the campus partially in-person, that means it requires workers to also be in-person. This means professors, TAs, LAs, RAs, instructors and more are all expected to be working in person to accommodate this semester’s plan, and often have to comply out of a fear of retaliation or desperation during economically uncertain times.”

“While the efforts CU has made are appreciated, until we have transparency from the university, we can’t trust that our and our families’ health (and our incomes) will be protected,” Pettine continued.

Wolf-Root expressed a special concern about university protocol for when students test positive for COVID-19.

“While I very much understand the need for not sharing students personal health records, on the current plans as we’re aware, if there are students in those in-person classes who tested positive, it is not necessarily the case that other students in that class will know,” he said. “If we want to say that students are making a real informed decision to consent to these conditions, you can not… allow them to be in classrooms with students who have tested positive for COVID without them knowing.”

Additionally, UCWC is calling for CU to permit anyone who can perform their remote jobs without any caveats, including reduction of pay, accessibility or privileges. Erik Knutsen, UCWC member and graduate worker in CU Boulder’s math department, said this is the most important condition and the one that should be met above all else.

“We want that to be across the board, completely,” Knutsen said. “We want that to be the status quo. It’s understandable that for some things, going remote does affect quality but for a lot of things the quality of our work is not affected.”

“The fact that that is not already set is the immediate warning and is the lowest possible bar during a global pandemic,” Wolf-Root added. “I think so much else is connected to that, but you have to start there.”

UCWC had a meeting with CU Boulder leadership, including Chancellor Philip DiStefano, Tuesday regarding their demands, although this has left members feeling even less optimistic.

“Nothing has been done to make me feel more confident in CU’s plan for fall,” Wolf-Root concluded. “If anything, I’m feeling less confident after the meeting with DiStefano and his team than I was before, if that’s possible.”

Pettine said that ultimately, they just want the community to be safe.

“As a student, I’m horrified by how blatant the university has been,” she said. “It seems obvious to me — and based on conversations I have with other students, to everyone — that the only reason we’re opening in person is to justify charging undergrads full tuition.”