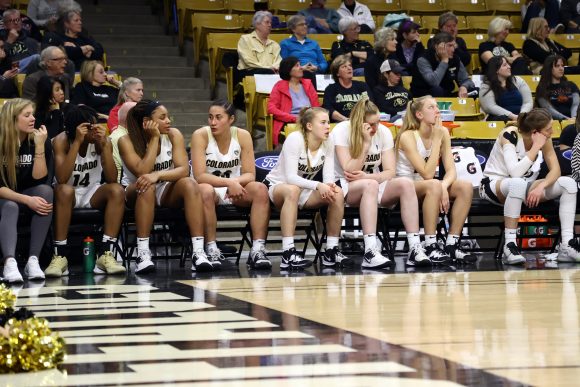 The Lady Buff bench displays a somber mood during the waning seconds of their 59-65 loss to Arizona State at the CU Events Center. Feb. 21, 2020 (Nigel Amstock/CU Independent)

University of Colorado student-athletes are beginning to reconcile with their respective sports seasons being delayed through 2020. While this fall holds many unknowns, the Buffs hope to stay smart and stay flexible until games return.

“It’s definitely been an emotional rollercoaster, especially these last couple of months,” said CU football senior quarterback Sam Noyer. “But, everybody’s going through it right now so you can’t really look at it that way. I think all you can do is just keep working and keep your head down and that’s all. At this point there’s really nothing else we can do.”

Noyer, who will be competing for the starting QB role with junior Tyler Lytle and freshman Brendon Lewis, hasn’t found life any easier with football practice starting up in the SEC, Big 12 and ACC.

“When you see the SEC and other conferences out there in full pads doing everything that we can’t do right now, it definitely leaves a sour taste in your mouth,” Noyer said. “But at the same time, like I said, we can only control what we can control and that’s not in our control.”

Not to affix on the unprecedented times narrative, but there is something to be said when uncertainty presents the only constant for student-athletes.

“We all expected to play this fall knowing that it would be a lot different than a normal season and then obviously when that got taken away from us, now we’re still in the same boat with a lot of uncertainty,” Noyer said. “It’s definitely tough not being out there with our guys. We should be in the middle of fall camp right now so it’s definitely tough.”

Despite being an individual and non-contact sport, men’s golf was given the same fate as football. Sixth-year senior golfer Ross Macdonald was surprised at the Pac-12’s verdict to delay their season.

“We all kind of thought that there is more of a chance we would play then not playing just because it is safe and they’re playing PGA Tour events and there doesn’t seem to be any problem with that and most of our fall events we can drive to so we could have done it pretty safely,” Macdonald said. “There’s just nothing you can do but it was definitely shocking to all of us.”

Macdonald was able to compete in three events over the summer and men’s golf head coach Roy Edwards said that most of his other golfers have been able to participate in amateur tournaments as well.

Like golf, cross country is another sport that is more feasible in a socially distanced world but was also postponed until 2021. All-American senior Eduardo Herrera said his team was similarly “upset” with their reality.

Women’s soccer began running “split” practices on Aug. 15 in preparation for a potential spring season. Despite the challenge of half-team practices, senior defender Gabbi Chapa was excited to regroup with her team for the first time since March.

“It’s a little changeup,” Chapa said. “Our dynamic is split into two groups as of now so I think that’s been the most difficult and challenging thing — being a team unit but in two separate groups, you don’t really see half of the group. I think that’s been hard for our team chemistry but it was unfortunate to hear that news. But like I said… we’re here, we’re here to train and that’s all we can look forward to right now is just being together and still having that opportunity to potentially play in the spring.”

One of the sports most caught off guard was men’s basketball, who typically don’t begin games until late October. According to head coach Tad Boyle, 11 of their 13 scholarship players have been on campus since early June and all have stayed healthy. Senior forward/center Dallas Walton was alarmed when hoops were put on hold.

“We knew that football would probably be affected, but we weren’t anticipating ourselves to be affected because because our season, we have some time between the two,” Walton said. “It was something that we had to take in and adjust to just like everybody has been adjusting to things all year. There was some disappointment for sure but we just gotta stay ready which is… our main goal.”

Another pertinent goal, if CU student-athletes indeed desire a spring season, is adhering to coronavirus health regulations. Skipping out on those large parties and wearing a mask will be the new reality for many this semester but especially for student-athletes. Women’s basketball junior guard Aubrey Knight puts it upon herself and her teammates to make smart decisions in the fall.

“If we want to play a season in January, we have to do these things that may be difficult now in order to make that happen,” Knight said. “We can’t go being reckless and go and party and hang out with all these people. We understand that if we want to have a season, which all of us do, we have to be doing these things.”