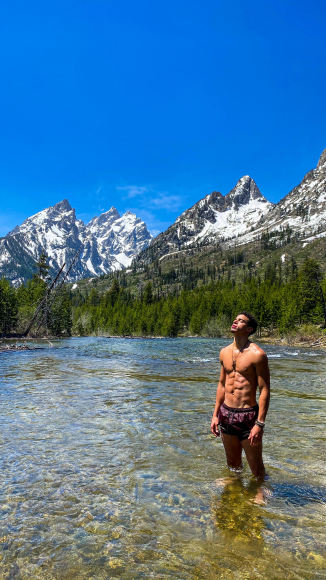 Off the court, University of Colorado Boulder men’s basketball senior guard Maddox Daniels has been chronicling his journey of introspection with his brother Mason on their YouTube channel, Mason and Maddox. We virtually sat down Maddox Daniels to gain a sense of clarity during these turbulent times.

CUI: What tips do you have for staying grounded and not over catastrophizing everything we see right now?

CUI: How do you work conscious consumption into your life?

Daniels: I made a YouTube video on it, it’s about 10 minutes long just speaking about conscious consumption, and really it’s just if we’re not conscious and aware of these things that are coming through—the music that we listen to, the movies that we watch, the news, TV shows, articles that we read, because a lot of these things are designed especially in the music industry and certain movies to actually implant things into our subconscious minds to where we’re not even aware of it. So that’s why it’s important for us to be conscious of the fact that there is subconscious programming going on when we’re looking at the news and they’re throwing all these death numbers out there, that there’s music talking about killing each other and cops and all this stuff. If we’re not conscious of the fact that this stuff is either numbing us to what’s going on in the world, or kind of lulling us into a state of unawareness of what’s going on in the world, if we’re not conscious of that, then we’re going to be put in a place where we’re disconnected from ourselves and we’re disconnected from the truth of what’s really going on. The conscious consumption around everything that we listen to, everything that we watch, is super important.

I like to say get radical with it. A lot of times, cutting off some of this news consumption and the music that we listen to and even certain relationships, stuff like that. If we really want to get radical and are open to shifting our perspective, understand that the mainstream, the culture, is bathing in a lot of lies, a lot of fakeness, and if we wanted to get real with ourselves, cutting off all that fake stuff, and then giving the time so that we can get honest with ourselves. Whether it’s through meditation, introspection, journaling, being in nature, making sure that we’re staying consistent working out (or) with our nutrition, where we’re really getting real with ourselves, because that’s when we start to be able to see and be able to discern from a more grounded point of view and a more clear point of view, because we got real with ourselves. We got honest with ourselves and we cut the fake out, so we lift the veil and we can kind of see what’s going on in the world for what it is, instead of for what these people who are behind the scenes pulling strings want us to see it as because they are very good at shaping public perception on mass manipulation.

CUI: How important is it to get outside? You’ve talked about the benefits of vitamin D in your videos, but what does getting outside really do for you?

Daniels: I was talking to Mason about this and he was just telling me the actual links between vitamin D deficiency and people who are being sick and actually having a harder time with this virus and just their health in general, and vitamin D deficiency is a big thing. I think it’s like 70 or 80% of the United States population is deficient in vitamin D. You’ve heard things about minority populations being hit harder by the virus and it’s interesting because the darker your skin is, the more vitamin D you need. It’s very interesting… I supplement with vitamin D, Mason supplements with vitamin D as well, so that’s one thing.

And just being outside in the fresh air. Breathing in. Boulder has great air quality. We see a lot of mask wearing outside. When we’re inside, in stores, this type of stuff, following these rules and regulations that had been put in place by people in government and stores have to be open for these mask mandates currently. So yes, wear the masks, but when we’re outside in the fresh air, I think it’s important for us to be open to getting that fresh air, not wearing the mask outside, and just really because we need that air. Normally we’re walking around in life, already even before all this stuff started, not getting enough air because in the rat race of society we’re always on go or there’s a lot of underlying anxiety and tension within us as human beings and we’re we haven’t really been taught how to activate our parasympathetic nervous system and to truly relax, and to truly allow our bodies to receive the oxygen that it needs and to really being outside, consciously breathing, making sure that we’re breathing in this fresh air and then just using all the other elements.

There’s these little tactics that I have talked about and will continue to talk about on our YouTube and Instagram, but nature is here to help us. It’s very interesting that we’re being told to stay inside and we’re being told to do a lot of these things by certain health experts. A lot of the real health goes on with the things that we put in our body, and how we’re actually understanding who we are as complex manifestations of nature itself as human beings, understanding the important role that nature plays in us being healthy and living vital lives. So we have to stay inside … if you’re sick, but then you’re not getting vitamin D.

CUI: Do you have any tips for creating that healthy routine and maintaining discipline?

Daniels: It’s interesting because I think there’s a fine line. There’s a balance that we can strike. Because if we say ‘oh, I’m going to add all these things in today, and I’m just going to start doing them’ and then if we get too rigid like that, and then we don’t do one thing, then we just fall off. We feel like we failed or something like that and it’s not sustainable that way. When it comes to developing healthy habits that allow us to really develop real deserving power and confidence in our immune systems, confidence in ourselves, we’re not living in fear, we’re starting to get clearer on what the truth is as far as what’s going on in the world. We have to be patient with ourselves and understand that it’s just about the conscious consumption.

My morning routine consists of: I get up, I make my bed—I feel like everybody should make their bed, it’s just a good way energetically to start the day—and then I go outside, no phone or anything. I ground for about 10 minutes, walk around on the earth, and I meditate for another 10, 15, 20 minutes and then I might do some yoga flow or something like that and then I go and I take a cold shower or either go into the creek and then I’ll either go to work out at Coors (CU Events Center) or something like that and this whole time I’m intermittent fasting. When I get up I don’t eat. I drink water, I hydrate, that type of stuff and then I’m continuing that fast… It’s a great way to start the day because I’m actually getting in my body. I’m grounding, (and) allowing myself through the intermittent fasting, through the meditation, through that type of stuff to get my mental on point, where there’s clarity there.

But for everybody it’s like, maybe we’ll add in intermittent fasting? And then the next week or two weeks later, then we’ll start adding some cold showers or some earthing and grounding or some meditation? And just being open to adding these things into our daily routine while we’re becoming more and more aware of the things that we look at and the things and conscious consumption.

CUI: Is there anything else you’d like to add?

Daniels: It’s all about us just making sure that we’re expanding our perspective so we can see the whole picture. We don’t want to be operating with a narrow lens in life, but to make sure that we’re open to the fact that there’s more out there that we can learn and that can help us step into who we are as unique human beings. There’s a lot. Let’s embrace our individuality. There’s a lot out there. It’s easy to jump on a group take perspectives or jump on these new waves, but we have to understand that’s what people want a lot of times that pull strings behind the scenes. So embracing our individuality and understanding that we are different. It doesn’t matter what race we are. It doesn’t matter what we do in life, (but) embracing the fact that we’re a unique human being that has the ability to uncover our souls purpose in life and being open to that. It’s going to get the ball rolling on amazing things, on passions, on everything.