“Through Glass: Works from the Other Side of the Mirror” is an enigmatic exploration 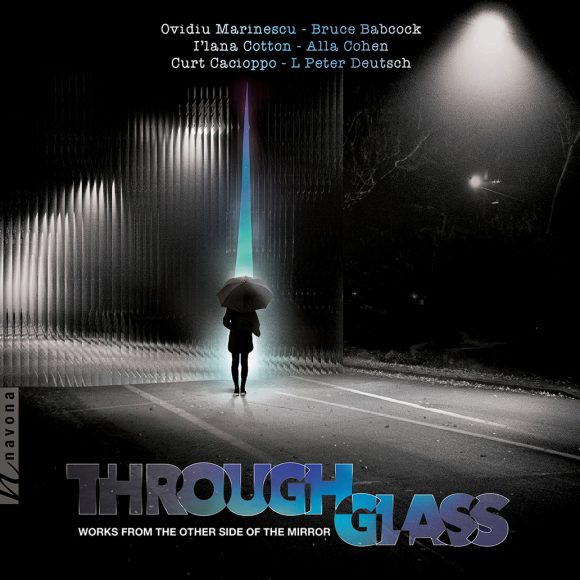 “Through Glass: Works from the Other Side of the Mirror,” released June 12 on Navona Records, is multifaceted and enigmatic. From Renaissance influences to dissonant post-tonal, the album showcases the variety of voices from top modern composers, including Bruce Babcock and Curt Cacioppo.

The album’s aesthetic is striking before the music even begins. White light spills onto the shadowy street, fighting against the darkness. A lone figure, bathed in blue light, stands with an umbrella before a glass wall. The glass is a clever symbol. Perhaps a nod to modern composer Philip Glass, it suggests this album moves to new realms of experimentation and social commentaries, as the figure prepares to walk through the glass.

“Rorrim No. 1 (A Short Essay)” opens the album with a lovely Bach-inspired melody. The title “Rorrim” is “mirror” spelled backwards, hinting at the melodic fragmentation and reordering to come.  Bach’s original melody from Prelude BWV 855 weaves in and out of the piano’s continuous sixteenth notes and an aching cello soliloquizes above it all.

As “Rorrim No. 1” gently fades, the second piece “Alternative Facts” dissonantly crashes in. Composed after the 2016 presidential campaign, the piece reflects “the times we are living in,” which are “discombobulating, annoying, loud, repetitive, confounding, crazy-making, tiresome (and) frenetic,” according to composer Bruce Babcock. Brash chords alternate with hurried scales. The piece is jarring and even anxiety-inducing—an accurate representation of 2020, despite being composed in 2016. It is difficult to listen to but needed.

Midway through the album, Cacioppo’s “Trio for Violin, Horn and Piano” is an interesting concept piece. The melody is based on the solfege of the three musician’s names – Francesco D’Orazio, David Wetherill and the composer Curt Cacioppo. To begin, each musician introduces their name-derived melody, later fragmenting, combining and interweaving to create a murky texture.  The combination of violin, horn and piano melds surprisingly well. The violin often stays in a gravelly, lower range, melting into the horn’s rich tones, while the piano provides a strong foundation. Over three movements, the trio wanders through abstract ideas and changing textures, ending on a quasi-Tango, a commentary on dictatorship in Argentina.

The final track “De Profundis Clamavi” is the album’s jewel—a comforting return after the album’s dissonant exploits. Composer L. Peter Deutsch creates a colorful seven-voice fugue for the piano trio, two voices each for violin and cello and four voices for the piano. Inspired by Renaissance-style polyphony, the intertwining melodies sound like a church choir transformed into a piano trio. Yet the melodic counterpoint is looser and freer, breaking free of rigid polyphony.

“Through Glass” as a whole gives a glimpse of modern music’s breadth and power. It shows us how modern music reflects our modern world, taking us beyond the expected, reinventing traditional aesthetics, wandering into the musical unknown.

“Through Glass” can be found on Spotify here.