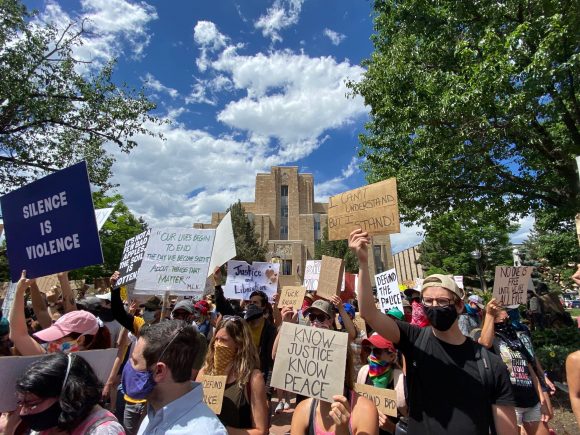 New University of Colorado head football coach Karl Dorrell held a virtual press conference on Monday to give an update regarding the state of the team.

To begin the conference, Dorrell talked about how the players have dealt with the protesting around the country. Since the death of George Floyd, Black Lives Matter protests have spread across the country with thousands of people speaking out about the systematic oppression of African Americans.  The Buffs showed their support for the Black Lives Matter movement by holding a protest, which was led primarily by student athletes, last Friday. Dorrell expressed his satisfaction with the team’s activism.

“I think that we wanted to quickly put something into action that shows a sign of support, unity and about wanting to make this change and them being a big factor and a step forward in that process,” Dorrell said. “We did organize that rally last Friday and we had a couple players speak at it. I think we want to do something active at least once a month.”

Dorrell said the protests have been a big part of his discussions with his players and the idea for Friday’s protest came from a team meeting last week.

“We’ve had a great discussion about all those things,” Dorrell said. “We had a great team meeting for about two hours. I said some things that were very emotional, the players said some things that were very emotional. What came from that was we wanted to quickly put something into action to show a sign of support and unity and about wanting to make this change and them being a big factor in it, taking a step forward in the process.”

After addressing the protests Dorrell discussed the difficult situation surrounding communication and training. Dorrell arrived at CU in February right before the COVID-19 pandemic suspended collegiate athletic activities. He has been unable to have in-person interactions with the majority of the team but continues to remain optimistic. Dorrell believes the Buffs have made great progress getting adjusted to the new coaching staff and the new system. He is looking forward to June 15 when players are allowed to return to campus for voluntary workouts.

“I don’t think I’m behind at all. We have been through installs and things with our team going on two or three rounds of install. Which is probably well ahead of where we would normally be,” Dorrell said. “They have been saturated with the information. I know our players are going to know what to do, it’s how we do it that’s important.”

The team will be limited to only strength and conditioning workouts when they arrive in June. The NCAA is expected to approve a plan that would allow teams to use a football starting July 24 and then finally start practicing in early August. Until then, Dorrell expects his players will take advantage of the voluntary workouts.

“We know it’s a voluntary time frame,” Dorrell said. “But I think since we didn’t have spring practice and I am new and the season’s going to be here before you know it, I think there is a sense of urgency that our players have embraced.”

With a potential chaotic start to the college football season on the horizon, Dorrell and the team are only focusing on what they can control.

“This is a big testing moment,” Dorrell said. “Things are starting to open up on campuses across the country. Can we keep this pandemic at a containable position? I’m not a doctor. I’m a football coach. I’m just told to do things a certain way and I’m trying to adhere to those things. That’s what they’re trying to see, is if these things can be controlled.”