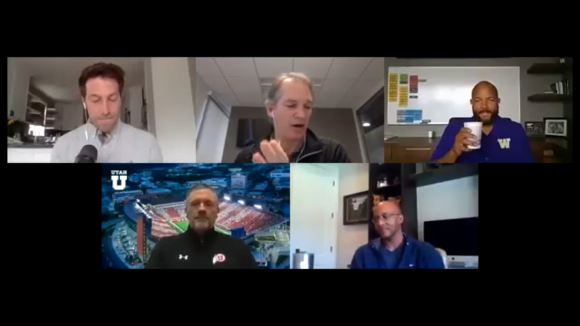 Pac-12 coaches discuss the status of the upcoming college football season over video call alongside Pac-12 Network’s Yogi Roth. May 11, 2020.

The coronavirus pandemic has raised many questions about the future of college sports in the fall, and in the future. California state universities have already moved their classes online for the fall and with the football season up in the air, the Pac-12 hosted four zoom conferences with head football coaches to answer questions and discuss the upcoming season. Tuesday’s call featured University of Colorado head coach Karl Dorrell, University of Washington head coach Jimmy Lake, and University of Utah head coach Kyle Whittingham.

Their discussion centered around what a realistic time frame would look like for preseason training to ensure players are ready. Dorrell believes eight weeks of practice could be the magic number to get his team in shape.

“Given the situation that we are in, I think it’s more ideal (longer time for preparation) since we haven’t had much time with our players with hands-on supervision,” Dorrell said.

Lake and Whittingham concurred, highlighting the important of safety for the players. The coaches determined that six weeks would be the minimum amount of time that their teams would need to be ready to play safely. If the season were to start on time, facilities would have to open by July and whether or not that is possible is still unknown.

Another problem that the pandemic has created involves communication. Most Pac-12 states are adhering to shelter in place policies, forcing college programs to connect and train while at home. Whittingham looks to make the best with his now virtual team.

“We are just taking advantage of what the NCAA allows,” Whittingham said. “The eight hours of zoom meetings a week, we have team meetings, unit meetings, position meetings, special teams, and we are hitting all areas and doing everything we can there.”

Entering his first season leading Colorado, Dorrell has to work a little harder to learn and evaluate his team, and it’s no easier in a virtual format. Dorrell looks to find his team leaders and hopes the online meetings can be a decent replacement to seeing his squad in person.

Colorado will be searching for a new quarterback after last year’s signal caller, Steven Montez, graduated and signed with the Washington Redskins. This has left CU in search of a new man behind center.

“It’s a wide-open position,” Dorrell said. “We are coaching them all hard and we are just going to see how the thing falls in place when we get a chance to line up at the beginning of the season, but we have a long way to go still.”

Vying for the spot will be senior Sam Noyer (who will return to play quarterback after playing safety in 2019), junior Tyler Lytle and freshman Brendon Lewis. Colorado’s two upperclassmen QB’s have just 17 combined passing attempts from the 2017 and 2018 seasons.

Whether or not the season occurs is unknown, but the coaches and teams in the Pac-12 are staying prepared. If college football and all college sports can come back this year, it could be a catalyst for hope and supply much-needed joy for fans around the country who’ve had to forgo the entertainment of college athletics during this pandemic.