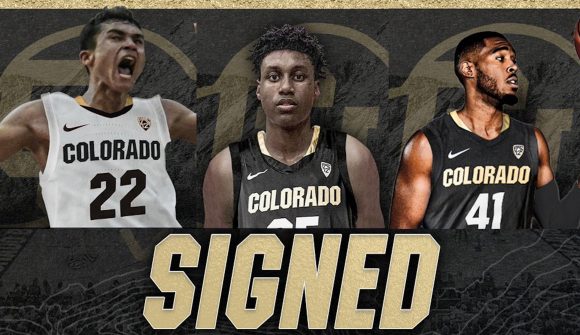 Colorado men’s basketball officially welcomed three players Wednesday morning as they signed their national letters of intent to play for CU beginning with the 2020-21 campaign. With juniors Tyler Bey and McKinley Wright IV both testing the draft waters, Colorado reeled in three forwards for next season’s squad.

To start, Colorado acquired Tulsa graduate transfer, Jeriah Horne. The 6-foot-7 forward will look to fill the void from the loss of Bey, who’s defensive ability is going to be difficult to match. Horne averaged 11.1 points per game his junior year and will look to make an immediate impact for the Buffs during his final year of eligibility next season.

The big surprise of the day was the news of a commitment and signing from Tristan da Silva. The 6-foot-8 forward is a native of Munich, Germany and didn’t publicly appear to be on the Buffs’ radar until CU announced his signing Wednesday morning. Tristan and his older brother Oscar da Silva will both call the Pac-12 home come next season. Oscar earned All-Pac-12 First Team honors as a junior with the Stanford Cardinal a year ago.

Lastly, Colorado added Jabari Walker. The 6-foot-8 forward out of Los Angeles, California, and most recently Arizona’s Compass Prep, is rated a four-star recruit on 247Sports. Walker was also highly recruited by Cal and St. Mary’s. The son of former first-round NBA draft pick Samaki Walker should add some much-needed depth to the Buffs’ frontcourt after the departure of Bey and graduation of forward Lucas Siewert.

CU fans should be relieved, as the vacancy in the frontcourt left by Bey could potentially be more than filled with the addition of three forwards. Depending on Wright IV’s decision to go pro or stay at CU for his senior campaign, the starting five for the Buffaloes could be filled with upperclassmen experience once again come 2020-21 with Keeshawn Barthelemy, who redshirted last season, providing some relief for Wright IV in the backcourt.

In addition, head coach Tad Boyle added two of Colorado’s best high school guards in Dominique Clifford and Luke O’Brien back in November. Both guards could see significant minutes early on for the Buffs following the graduation of Shane Gatling in May.

Here’s a look at a potential starting five and reserves for the Buffaloes in 2020-21:

The primary position up for grabs looks like it’ll be the two spot next to Wright IV (assuming he returns) in the backcourt, which could be filled by a number of players, including rising senior Daniels, Canada-native Barthelemy, rising junior Parquet or in-state high school stars O’Brien and Clifford. Rising junior guard Daylen Kountz opted to leave Colorado, entering the transfer portal in March.