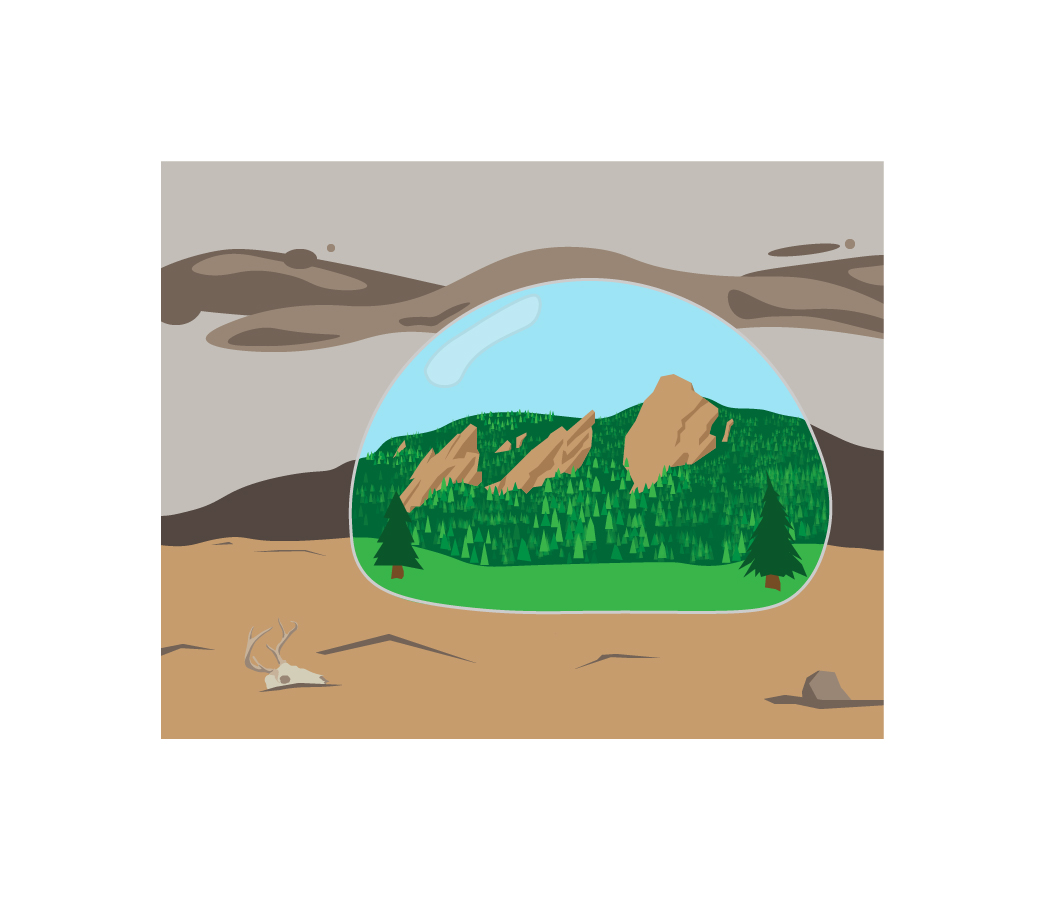 The City of Boulder is considered one of the most sustainable cities in the U.S. The city’s innovative efforts to protect the environment stress the sustainable potential that other cities do not yet possess.

The first fight against a change to Boulder’s landscape occurred in 1910 when the public fought against building an amusement park on top of Flagstaff Mountain. The preservation of Boulder’s “blue line” has been a priority ever since. Denver does not have the same law for its horizon line. Horizon lines legally determine the maximum height for buildings. In 2018 a developer proposed an 81-story skyscraper. Though the lot was later resold, there was no law saying it couldn’t be built.

Boulder’s green initiatives such as its open space projects and annual Walk to Work Day have created an environmental community that stands out amongst others. The city is years ahead of most when it comes to environmental efforts.

The University of Colorado Boulder is ahead of the curve as well. CU ranked tenth in 2017 among public schools in sustainability according to the Princeton Review. The university was the first to develop an environmental center in 1970. As the center celebrates its 50th anniversary it is still the largest center on a college campus.

Boulder was one of only 16 cities that helped its locals compost in 2016. Of those 16 cities, Boulder is the only small city listed. While curbside and industrial composting programs are on the rise in the U.S., an imported recycling ban from China could be detrimental to nationwide sustainability, as it has caused hundreds of cities to stop their recycling programs.

Recycling is expensive and time-consuming. As it becomes more popular, recycling becomes more difficult to do. The University of Georgia estimates that the ban will leave 111 million metric tons of trash with nowhere to go by 2030.  The ban impacts most of the nation, but Boulder property owners are required to provide recycling and composting for its tenants, once again placing the town on a sustainable pedestal.

Though some places like New York are finally beginning to catch up with Boulder, not every location is there yet. In 2012, Boulder placed a tax on plastic bags, decreasing its use by 70%. Plastic bags were banned in New York on March 1, 2020, eight years after Boulder’s tax was put in place.

In 2018, Colorado residents only recycled 12% of their waste. Boulder’s residents recycled 30% more than Denver’s.

“As Boulder remains progressive, there is hope that other places will take action as well.”

Chris McCaffrey, a second-year environmental studies student at CU, believes that Boulder is ahead of the curve with sustainability because of its inhabitants. Boulder was ranked the most affluent medium-sized city in 2014 according to the Denver Business Journal. Because of the city’s higher median income, residents can afford sustainable products such as electric cars, energy-conserving home installations and local produce. McCaffrey highlighted that most people in Boulder are active and part of the outdoor community, giving locals an incentive to protect the land they use and love.

A healthy integration of environmental protection and urban settings can be seen at the Boulder Creek Path according to McCaffrey, who believes that other cities should integrate nature into urban settings in a similar way. When cities remove creeks, they are likely to have an increase in floods.

“It’s maintaining a healthy ecosystem with a creek that’s coexisting with people all the time. Everyone has the chance to get out and feel connected to nature for a bit,” McCaffrey said.

After spending time living in Argentina, McCaffrey trusts that its locals have the right perspective about the environment.

Climate change becomes more important each year, as national leaders around the globe have begun to prepare for action. UN Climate Change Executive Secretary Patricia Espinosa describes climate change as the main struggle of the present generation and a struggle that affects all future generations. As Boulder remains progressive, there is hope that other places will take action as well.