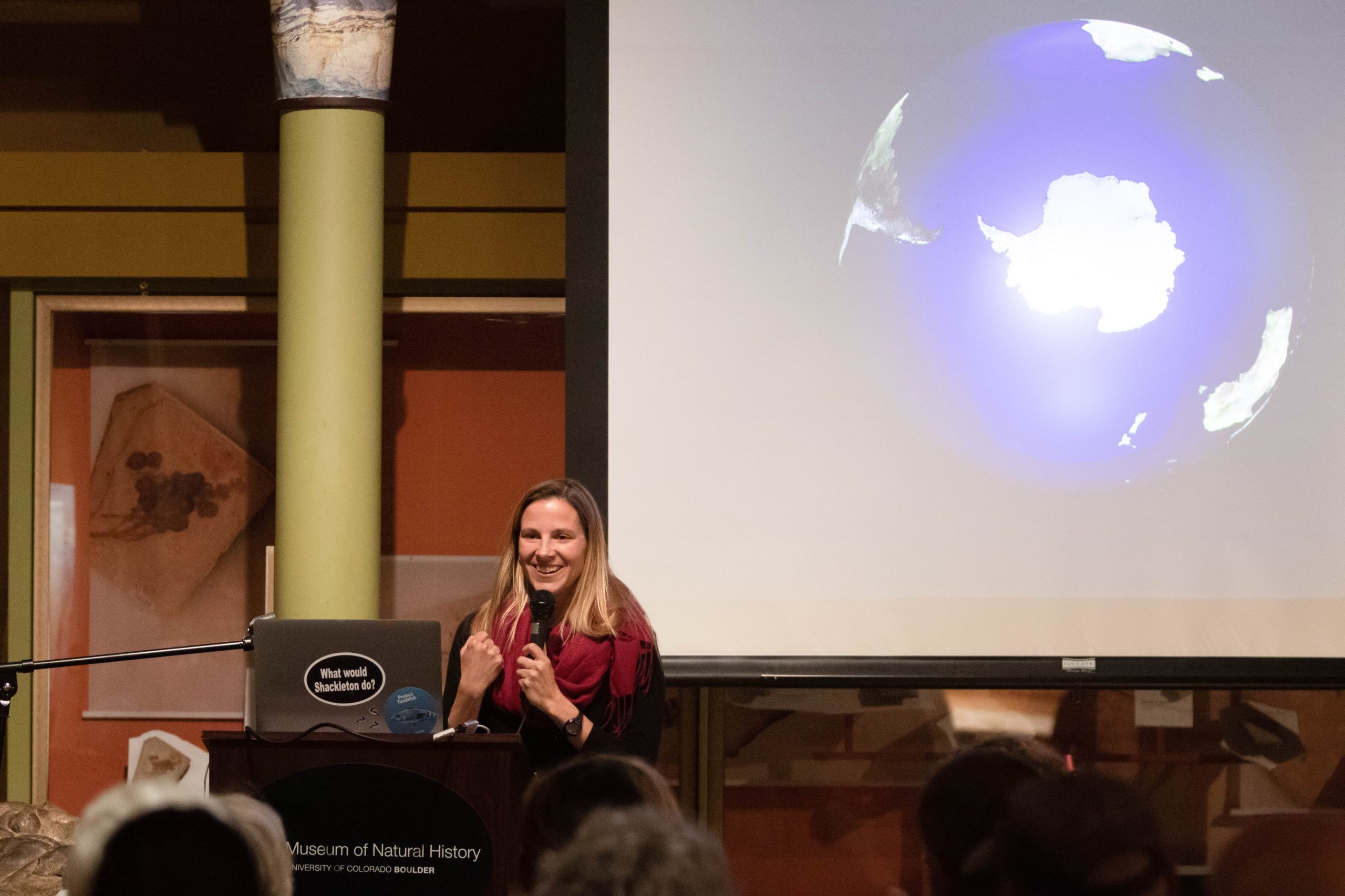 Cassandra Brooks reacts as audience members participate in a question she asked during her speech on March 9, 2020. (Kara Wagenknecht/CU Independent)

Cassandra Brooks, an assistant professor in Environmental Studies at the University of Colorado Boulder, spoke to students and community members Monday night in the CU History Museum on her experience leading Homeward Bound, a global women’s leadership initiative in the Antarctic.

Brooks received a Ph.D. in international ocean policy with a focus on marine protection in the antarctic from Stanford University. She was a core member of the Last Ocean Project, helping derive the creation of the world’s largest marine protected area in the Ross Sea. Brooks has published over 150 stories on marine science and the environment. She has traveled to Antarctica several times on various research trips.

“Despite being such a harsh climate, its waters actually teem with life. In fact, Antarctica contains some of our last healthy marine ecosystems left in the world,” said Brooks.

Homeward Bound is a global leadership network that aims to create a healthier planet through women’s leadership initiatives. Women in science, technology, engineering, mathematics and  medicine go on 11-month trips in Antarctica.

“The more diversity of voices we have, the better we are gonna solve the problems,” said Brooks.

“Despite being such a harsh climate, its waters actually teem with life. In fact, Antarctica contains some of our last healthy marine ecosystems left in the world.”

Brooks briefed the room on the history of Antarctic protection. In 1959 global leaders signed the Antarctic Treaty which made the continent of Antarctica a scientific exploration center. The Convention for the Conservation of Antarctic Marine Living Resources resides on this treaty and governs fisheries and other activities in the oceans surrounding Antarctica. The two main fisheries in the southern ocean are for krill, a small aquatic crustacean, and toothfish, which act as the top fish predator in the Southern Ocean.

“It’s inspiring to see how much activity there is for female scientists and leaders…there’s a very large momentum of shifting leadership at a time where we’re facing environmental crises,” said community member Cal Brackin.

Brooks asked attendees how many of them have eaten a southern ocean species. Besides a few audience members aware of the relabeling of these species, no one had seen krill or toothfish on any menus or ingredients labels.

Most people have in fact eaten a southern ocean species. Supplement companies use krill for fish oil omega-3 pills and restaurants market toothfish with the more appealing name, Chilean Sea Bass. Toothfish have long life cycles and reproduce at a late age, making them especially vulnerable to overexploitation.

“Chilean Sea Bass are not Sea Bass, they’re not from Chile, they are toothfish from Antarctica,” said Brooks.“It brought home for me how bad off the rest of our global fisheries are if we’re actually sending ships all the way to Antarctica.”

Brooks then expanded on her role in the establishment of the largest marine protected area in the Ross Sea. Looking at the map of protected areas, Brooks said “this is an amazing start, but really to safeguard biodiversity in the Southern Ocean we need a network of protected areas.”

Brooks said that she and her husband named their daughter after Antarctic Adélie penguins. “I really want my Adélie to be able to live in this world thriving with Adélie penguins,” Brooks said.

Last year, around this time, a colleague of Brooks called her and asked if she would be willing to come to Antarctica on a women’s leadership expedition, Homeward Bound.

Brooks discussed the history of women in Antarctica. Women have only been allowed for the last 50 years and the first came in November of 1969. She explained that when women tried to come they were told, “It’s not a women’s place, the climate is too harsh, women can’t handle crisis situations (and) they can’t lift heavy equipment.”

The United States let the first women work in Antarctica in 1979 with the US Antarctic program — Britain followed in 1983 allowing women in their British Antarctic Survey. Today, women represent a third of the people at the South Pole. Only 10% of senior leaders are women.

“It was really nice to see the leadership, the actual things that were being done on the ground,” said CU undergraduate Elizabeth Woolner.

Throughout the course of the program, Brooks learned that being a leader “means being authentic.”