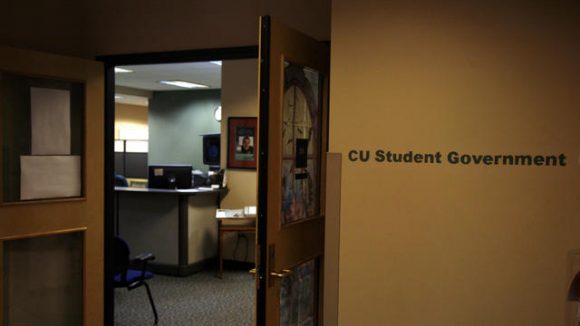 A bill to solidify the positions of two University of Colorado Student Government (CUSG) liaisons related to diversity and accessibility was tabled Thursday night following roughly 45 minutes of open discussion between Legislative Council. The hearing led to conversation about how CUSG should best structure and solidify its diversity initiatives.

Authored by Attorney General Delaney Deskin and sponsored by both CUSG executives and two Legislative Council members, the bill calls for the multicultural and disability liaison positions to continue within the executive branch for an additional two fiscal years in order to advocate for underrepresented voices on campus. When new tri-executives are elected in April they will decide how exactly to structure their cabinet. That could mean removing these positions. The bill would act as a recommendation to keep both positions.

“We cannot pride ourselves for being open when we close the doors,” Deskin said Thursday night. “Boulder is a school that prides itself on its strong community in level diversity, but diversity is not something that this case, this campus can truly embody until it addresses the needs of students with disabilities.”

The two liasion positions were created in June 2019 and were tasked with finding ways to support and advocate for underrepresented students on campus. Donavon Bright, the current multicultural liaison, has worked to start dialogue with CU’s Black Student Alliance, which spearheaded a call to action for more minority support following a series of racist attacks on campus in fall 2019.

Melissa Grover, who serves as the disability liaison, has worked to increase accessibility of campus events and provided input for the Transportation Master Plan, which will recommend options to the university on how to best address transportation and accessibility on campus.

During the hearing and open discussion, concerns were raised about whether students would apply for positions in the future and how easy it would be to fill the roles.

Deskin said both positions were some of the most competitive for applicants in 2019. The positions would also work on a rolling basis to ensure that the most qualified applicants fulfill each role.

United Government of Graduate Students Senator Jake Carias said there is “no long term guarantee” to the structure of the bill. The largest concern dealt with the bill’s life expectancy. After two years both positions will expire and require new legislation enacted to keep them.

Josh Ney, Leeds School of Business Co-Senator, said he fears the bill does not guarantee security for the positions long-term as future administrations could restructure or remove them altogether.

CUSG Cheif of Staff Jessie Bixler questioned if the senators were arguing for a “different reason.” Still, she made clear that she believed nobody in the council would vote against the purpose of the positions but rather the way they are executed.

“I think we need to start looking at each other, not as enemies but as public servants all together serving everyone,” Deskin said.

The bill’s future is currently up in the air with council saying it will refer to the Social Equity Commission for advice on how to further the bill before an eventual vote that has yet to be scheduled. Council said it has also created an Ad Hoc committee to work on the bill but has yet to add any members. The temporary committee must have members added by ratifying them through Legislative Council.