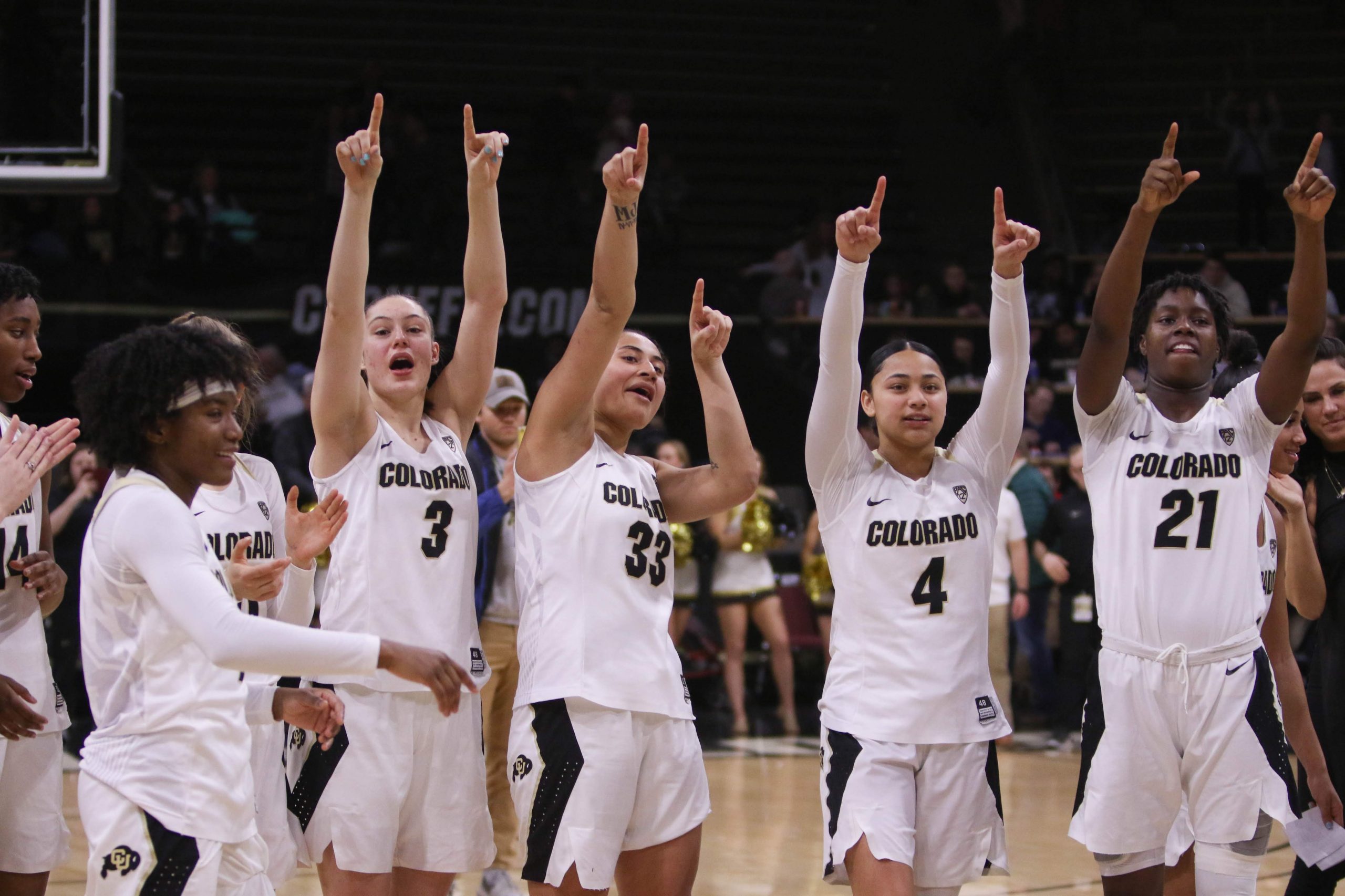 The Buffs celebrate their win by pointing to the crowd to show support to their fans at the CU Events Center. Feb. 23, 2020 (Kara Wagenknecht/CU Independent)

In the last seven days, the University of Colorado Boulder women’s basketball team has played host to No. 8 Stanford, No. 21 Arizona State and on Sunday, No. 11 Arizona.

The Buffs suffered a heartbreaking loss to the Cardinal last Sunday on a last-second buzzer-beater, falling 69-66, while on Friday, ASU edged CU, 65-59, even with the Buffaloes maintaining a lead well into the fourth quarter. But Sunday, head coach JR Payne’s Buffaloes (16-11, 5-11 Pac-12) at last prevailed over a ranked opponent, defeating the No. 11 Arizona Wildcats 50-38  in the last home game of their season.

The Wildcats came into the game ranked eleventh in the nation, their highest ranking of the season, and looking to extend their four-game winning streak. The Buffs found themselves looking to bounce back from two heartbreaking losses and get the win on Senior Night, celebrating the team’s sole senior, guard Quinessa Caylao-Do.

“We wanted to play everything ‘Q’ embodies tonight and I think we took that to heart and wanted to get a win for her on Senior Night,” said junior forward and guard Mya Hollingshed. “She’s a smart player and has a calming presence that keeps everyone focused and centered.”

Arizona scored the first point of the game off a foul by sophomore forward Peanut Tuitele. Tuitele bounced back, scoring the Buffs’ first basket down in the post. Freshman guard Jaylyn Sherrod then went to work, going straight to the basket, scoring and putting CU up 4-1. On the defensive side, the Buffs came out strong from the first quarter. Arizona was forced to take last-minute shots or ended up with a shot clock violation.

“We are really capable of defending and I think that the team will use that moving forward,” Payne said. “To know that when we need a stop and we dig in and really communicate we can get those stops.” 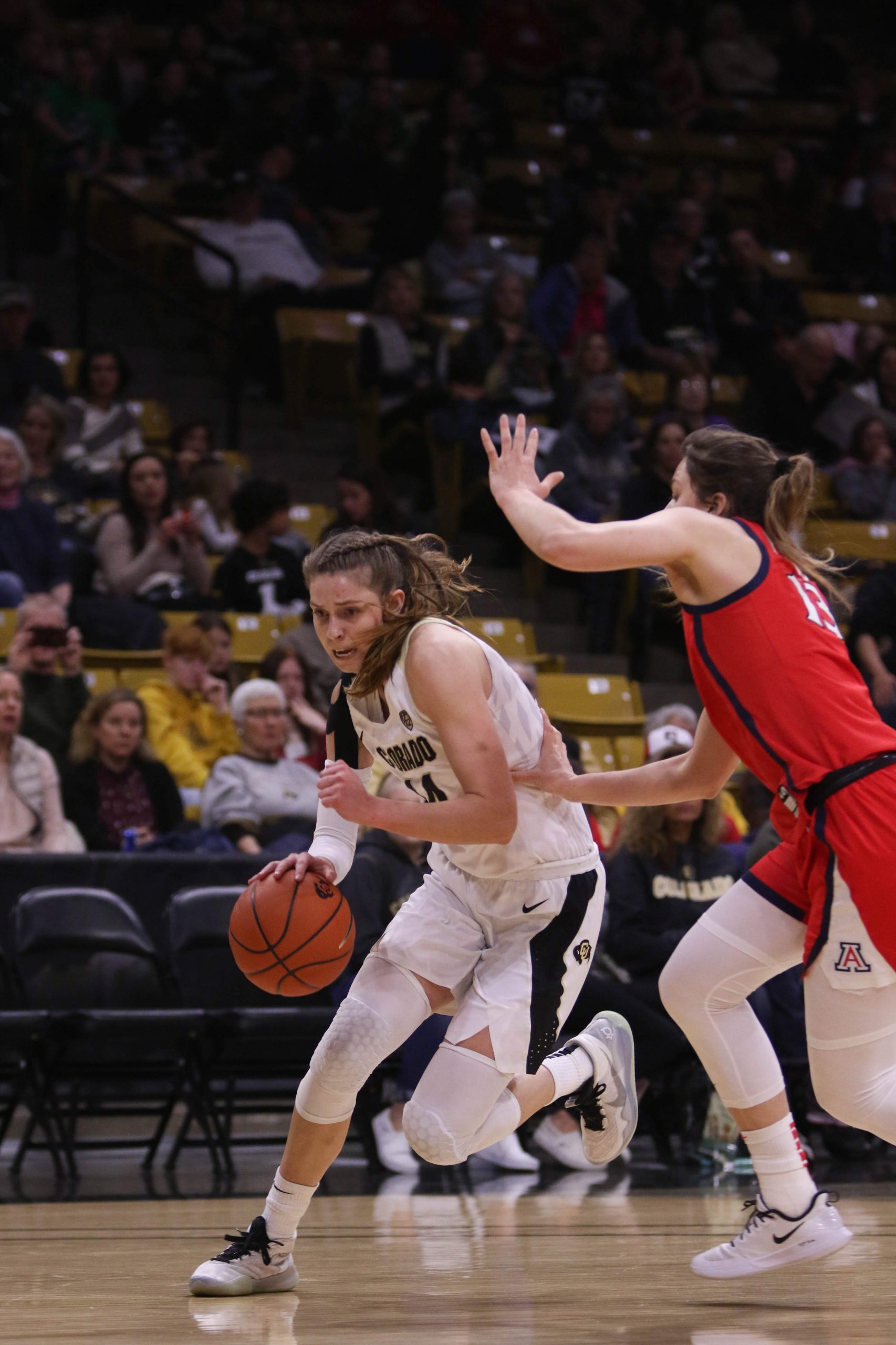 Back-to-back layups by Arizona put the Wildcats up. A combined eight points from Hollingshed and redshirt sophomore guard Aubrey Knight gave the Buffs back the lead to end the first with a score of 11-8.

The Wildcats kicked off the second quarter with a three to tie the game 11-11. Sophomore guard Emma Clarke got things going for the Buffs, hitting back-to-back shots and putting CU up three. Neither team scored for nearly five minutes and Arizona finally ended the drought with a jumper. Tuitele immediately responded, making a layup on the Buff’s next possession. The teams stayed neck and neck until the end of the quarter, ending the half tied at 19.

The Buffs struggled to maintain their momentum in the third quarter. Following a turnover by Sherrod that sparked a fast break layup from the Wildcats, Arizona led by four. Fouls and more turnovers slowed CU down, and Arizona closed out the quarter up 31-29.

CU came out with fire in the fourth quarter and tied the game up right off the bat with a bucket from Knight.

“We picked up a lot of energy in the fourth quarter and the team got energized, got offensive boards and we started scoring,” Hollingshed said.

Knight came off the bench for the Buffs and had a stellar performance with eight rebounds and 10 points.

“When she is aggressive and rebounds number wise like (tonight), it typically really changes the game for us offensively and defensively,” Payne said.

Defense won this game for CU, and that was none more evident than in the last quarter. The entire team went to the boards and Hollingshed logged a career-high 13 rebounds while scoring eight. The Buffs outmuscled U of A on the glass, snagging 48 rebounds to the Wildcats’ 27.

“I wanted to get on the glass a lot more to get those second-chance opportunities and to limit them to one possession,” Hollingshed said.

A layup from Caylao-Do put the Buffs back in striking distance, down 38-37 with just over six minutes to play. Sherrod followed that up with a strong drive and made a layup, getting the team back on top.

Late in the fourth, Hollingshed hit the only three-pointer of the night for CU, energizing the team and the crowd. From then on, the Wildcats fouled on almost all of CU’s offensive possessions, leading to a combined six points off free throws from Sherrod and Caylao-Do. CU closed out the fourth on a 15-0 run, enough to put them on top and win the game 50-38.

The Buffs will next hit the road for their final two games of the regular season and hope to bring their lessons of success from this game to the next.

“We have to play really hard and be really disciplined and take the learning lessons from not just the last 25 games but from this game and try to apply it to the next one,” Payne said.

The Buffs head to Los Angeles to take on UCLA first followed by USC. Tip-off for UCLA is 9 p.m. MST on Friday, Feb. 28. 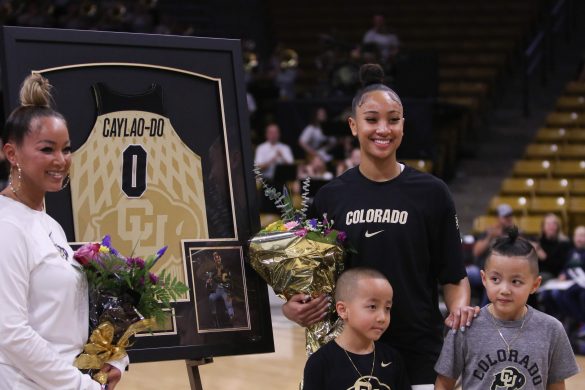 Lone senior guard Quinessa Caylao-Do poses for photos in front of her jersey during the senior recognition ceremony before the game at the CU Events Center. Feb. 23, 2020 (Kara Wagenknecht/CU Independent) 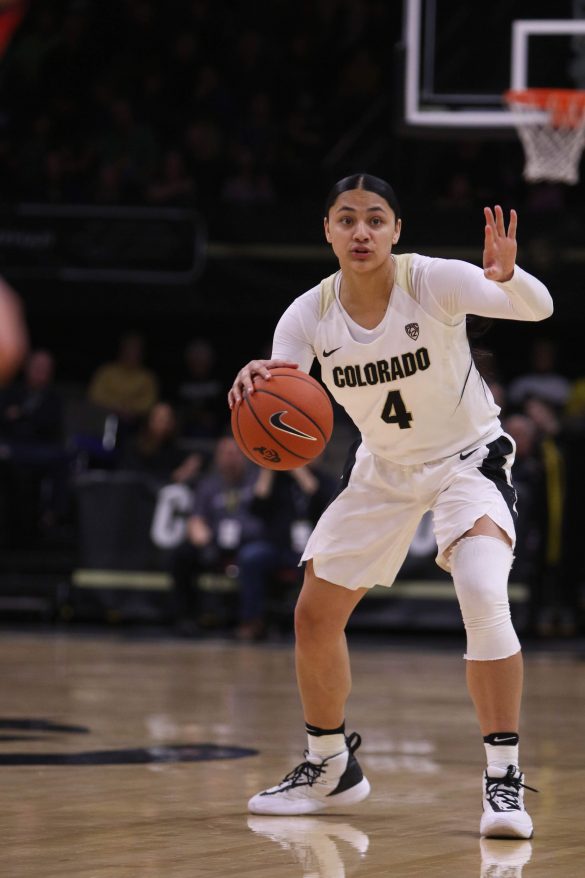 Sophomore guard Lesila Finau signifies what play to run during the first half at the CU Events Center. Feb. 23, 2020 (Kara Wagenknecht/CU Independent) 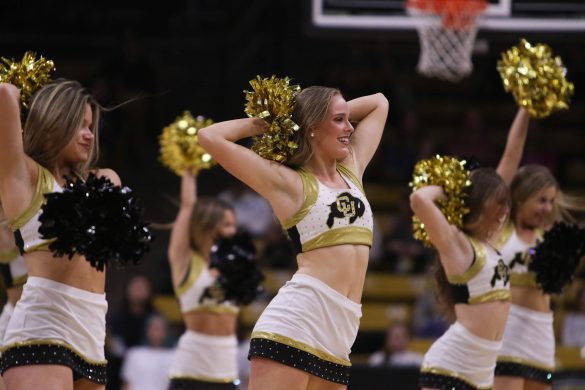 The dance team performs in between the third and fourth quarters at the CU Events Center. Feb. 23, 2020 (Kara Wagenknecht/CU Independent) 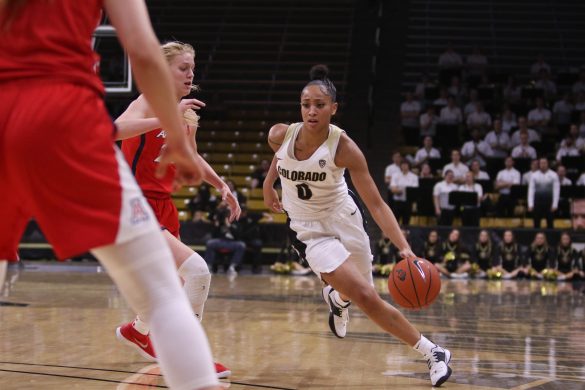 Senior guard Quinessa Caylao-Do drives to the basket during the fourth quarter in order to secure the lead against No. 11 Arizona at the CU Events Center. Feb. 23, 2020 (Kara Wagenknecht/CU Independent) 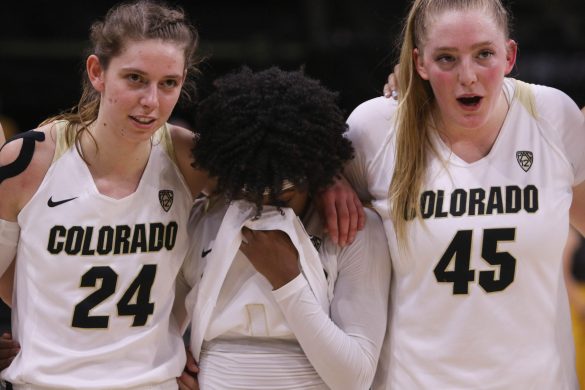 Freshman guard Jaylyn Sherrod wipes tears from her eyes after defeating No. 11 Arizona and after senior Quinessa Caylao-Do's speech after the game at the CU Events Center. Feb. 23, 2020 (Kara Wagenknecht/CU Independent)