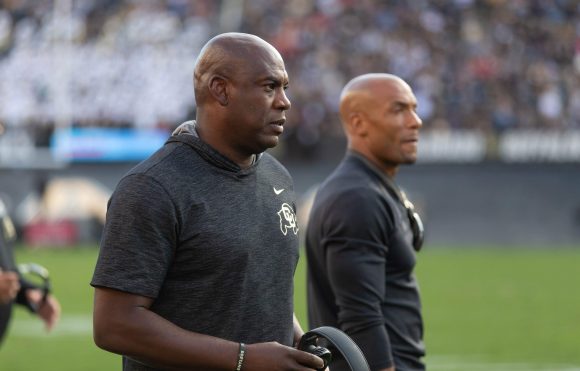 Head coach Mel Tucker watches the action from the sideline during the game against the University of Arizona at Folsom Field. Oct. 5, 2019. (Kevin Wu/CU Independent)

Just days after reaffirming his commitment to the University of Colorado Boulder in spite of Michigan State’s interest in him, CU head coach Mel Tucker has reversed his decision, agreeing to become the new head football coach for the Spartans according to reports late Tuesday night.

The news comes as a shocking blow for CU fans and players who were assured by Tucker on Twitter that while he was “flattered” by MSU’s offer he was still committed to building out the Buffs’ program. But after a second offer by MSU that will reportedly double his Colorado salary, which is approximately $2.7 million, Tucker couldn’t refuse. He served only one season as CU’s head coach.

“We are disappointed to see coach Tucker leave,” said Athletic Director Rick George in a statement Wednesday. “We are excited about the upward trajectory of our football program and we’ll get to work immediately hiring the next head coach to build on our momentum and lead our young men. We’re confident this program is on the verge of competing at the highest level and has the resources and support in place to do so for a long time.”

It was only three days ago that Tucker, at an event in California, called Colorado a “destination opportunity.”

“I have a special relationship with Rick (George) and Nancy (George’s wife),” Tucker said in California. “In the coaching profession you have stepping stone jobs and then you have destination jobs and I see CU as a destination opportunity. I’ve coached 23 years, I’ve coached over 300 games of football. I’ve waited 22 years for that right opportunity.”

The short time in which it took Tucker to officially change his mind has left current players, prospective recruits and Colorado football’s 2020 signees feeling a lack of transparency, with many taking to Twitter to voice their upset.

Disappointed with the news today. What is a man without his word. @CUBuffsFootball has great people leading and full faith in those people to find the right person to help us achieve our goals this season which haven’t changed in the slightest! #foreverbuffs #buffnation #sko

2020 4-star running back signee Ashaad Clayton was just one of many who voiced his disapproval of Tucker’s departure on Twitter. The New Orleans, Louisiana native spoke to Tucker on the phone after officially signing with Colorado less than a week ago.

“I just want you to know that I love you man and I’m happy that you’re a Buff,” Tucker said in a tweet on the Colorado Buffaloes Football account. “This is not the end man, it’s just the beginning.”

Three-star wide receiver and 2020 Colorado signee Keith Miller reaffirmed his commitment to playing football in Boulder and jokingly jabbed the Spartans on Twitter.

Colorado, according to reports from NFL Network’s Ian Rapoport, is likely to reach out to Kansas City Chiefs offensive coordinator Eric Bieniemy regarding its vacant head coaching position. Bieniemy, being a Colorado alum and CU’s all-time leading rusher with 3,940 yards (just ahead of Denver Broncos’ running back Phillip Lindsay), would make logical sense for George and the Buffaloes, though it may be difficult to convince the recent Super Bowl champion to make a return to his alma mater.

On Wednesday afternoon, George named fourth-year wide receivers coach Darrin Chiaverini as interim head coach saying in a statement he has “a lot of confidence” in Chiaverini’s leadership.

“It’s an honor to be named the interim head coach at the University of Colorado, and my focus will be to help make it a smooth transition for the student-athletes and the program overall,” Chiaverini said in a statement.