Colorado women’s lacrosse to kick off with play against Florida Saturday, Feb. 8 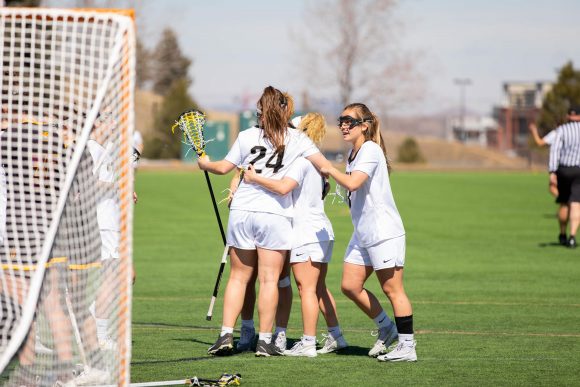 The CU Buffs women’s lacrosse team give each other hugs after scoring a goal. March 17, 2019 (Casey Paul/CU Independent)

The Colorado women’s lacrosse team begins regular season play on Saturday, Feb. 8. The Buffs, a preseason top 20 team, will travel to Gainesville to start the season with a match-up against the Florida Gators who rank four spots above Colorado at No. 14. The Buffs fell to Florida last season, losing 16-9.

Colorado head coach Ann Elliott Whidden said it’ll be important for the Buffs to take advantage of each opportunity as it comes in order to avoid letdowns.

“Right now I’m most excited to play Florida,” Whidden said, following Sunday’s scrimmage against Northwestern. “They’re an incredible team, a team we’ve struggled against. They’re aggressive, they have great players, they’re good on the draw. … And for our team, it’s just (about) continuing to build our confidence, continuing to learn how to play when we’re tired and do the little things when we’re tired and realizing how much those moments count.”

In addition, to their game against the Gators, the Buffs’ non-conference schedule features multiple road games against other top 15 preseason teams. Following their home opener against Harvard on Feb. 21, Colorado will travel to Ann Arbor for a match against No. 9 Michigan on Feb. 23. Colorado will also travel down the road to Denver to play No. 10 Pioneers on April 9. Finally, prior to their regular-season conference finale against Oregon on April 17, the Buffs will play No. 13 Stony Brook in Long Island on April 12.

Following the graduation of attackers Samantha Nemirov and Miranda Stinson last spring, Colorado will have to rely on some of its youth to carry the load offensively in 2020. Nemirov and Stinson accounted for the bulk of Buffs’ offensive production during their careers, especially in their final two seasons. The duo recorded a combined 115 goals last season, which accounted for over 51% of the Colorado goals scored in the 2019 season.

Sophomore attacker Charlie Rudy said she, in addition to a few other underclassmen, are ready to take on an expanded role within the offense.

“I think a couple of us, the younger girls are really stepping up and going to have a bigger part in the offense,” Rudy said. “I think our offense is working together better and less individual this year.”

Sunday’s scrimmage against Northwestern, who enter the season ranked No. 3, gave the Buffs a taste of what they’ll see against Florida in early February.

“(Florida’s) a really strong team with a lot of pressure too, so we just got to work on moving the ball fast and handling the pressure, especially with our young offense,” Rudy said. “Also, for defense, they’re going to be transitioning fast, so we just got to stop the ball sooner.”

The Buffs hired Whidden in March of 2012 and played their first official season in 2014. Since that time, Whidden holds a career record of 76-38, including a stellar 42-13 mark in conference play. During her tenure, four players have combined for six Intercollegiate Women’s Lacrosse Coaches Association (IWLCA) All-America honors. 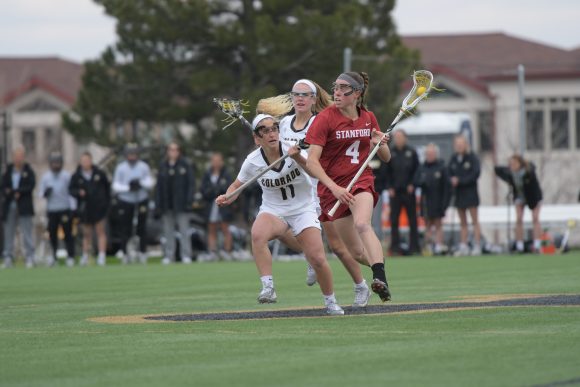 “I think the most rewarding part is just watching the program grow,” Whidden said. “Seeing where we started from and what we’ve been able to achieve and a lot of that is just about the players. I think just the player development both on and off the field has been incredible.”

Despite its abundant youth, Colorado has eight seniors on the 36-person roster. Senior midfielder Jen Mistretta said playing alongside the first official recruiting class of the program during her freshman season in 2014 has made her career especially noteworthy.

“I think definitely in the beginning it was tough because we were the fourth team to come on, so we were with the very special class, the first class to ever start the program,” Mistretta said. “So, I think we had a lot to learn from them and have a lot to bring to the team and show the younger girls what to do. As a whole, I think that the program is going in the right direction, definitely a lot of people who are just here wanting to work hard and play for CU.”

In addition to Mistretta, senior goalie Julia Lisella should make up for some of the Buffs’ lack of experience on the defensive end. The senior from Littleton recorded 10 wins in her junior campaign and posted a 10.19 goals-against average, good for second in the Pac-12 and 19th nationally.

Whidden said having a goalie with multiple years of experience under her belt not only helps defensively, but it also gives some of the younger players a person to look to for guidance.

“Anytime you have a goalie down there that’s a gamer and confident and has that experience, knows what it’s like to play against great shooters in tight games, you’re one ahead already there defensively,” Whidden said. “I think Julia has that over the last couple years and she’s been through different defenses and challenges and we’re excited about her leadership down there.”

After losing three of their first four games to start the 2019 season, Whidden said finding a way to perform at a high level consistently will be the focus this season.

“Every game is going to be huge for us,” Whidden said. “For this team, we had an up and down year last year and we let some things get away from us. Every opportunity we have this year I think is as important as the next and a little bit of redemption for us to see if we can find some more consistency in 2020.”