Here’s what Colorado U.S. Senate candidates said about environment, immigration and more during a Latino-centered forum 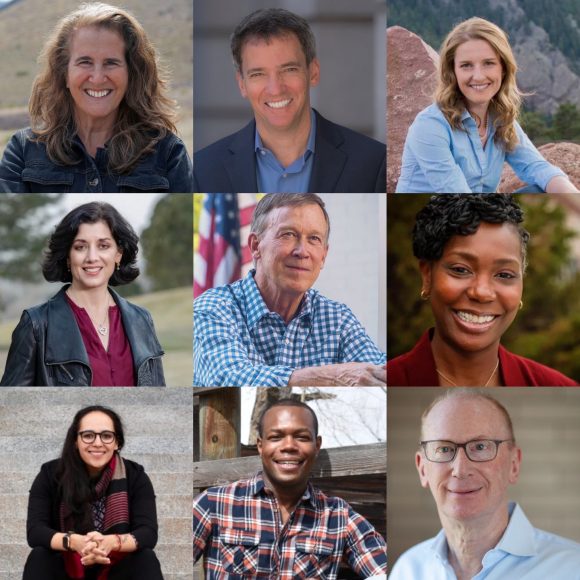 Updated 1/28/20: The article previously stated that Diana Bray was a current adjunct professor at the University of Denver. She no longer serves in this role.

With a crowded primary field of Colorado Democrats vying to challenge Republican incumbent Sen. Cory Garner in the 2020 Senate elections, a Longmont-based grassroots organization invited all nine candidates to speak at a town hall at the Longmont Museum Sunday.

Hosted by Longmont Latinx Voice, candidates spoke on the issues of immigration, education, housing, health and environment as well as voter turnout and how these issues affect the Latino community in Colorado.

According to the Latino Leadership Institute, Colorado’s demographics currently consists of 70% non-Hispanic white and about 21% Latino, although the Latino population is expected to grow by 12% in the next 20 years.

Nick Lopez served as moderator for the event, allowing each candidate a few minutes for introductions before asking a series of questions, including questions submitted prior to the event by the public. Erik Underwood was given five minutes for the introduction due to his late start in the race.

According to Lopez, polling shows that the Latino community is deeply concerned about the environment and the potential impact it has on families. Lopez said that a high number of Latino households are located in areas where they experience high levels of adverse pollution. He asked how the candidates would address the issue while ensuring that the Latino community has a seat at the table.

Many candidates expressed their support for the Green New Deal, which would prioritize the issue of climate change in Congress.

Candidate Diana Bray, a clinical psychologist and climate activist, said her interest in the climate is an interest in social justice.

“We have to incentivize a green new deal, we absolutely have to go further,” Bray said. “If we don’t go further, then we are going to have a humanitarian crisis the likes of which none of us can imagine. The government needs to step in, stop drilling on public lands, stop new fossil fuel infrastructure.”

“Mass transit across the country does not exist,” Spaulding said. “When we are doing interstate planning, mass transit has to be one of the top priorities to affect both climate crisis and access (and give) access to jobs, access to communities, neighborhoods.”

John Hickenlooper, former governor of Colorado, did not address the Green New Deal but believes that businesses must be held accountable for their effects on communities. Hickenlooper ran an unsuccessful campaign to become the 2020 Democratic nominee for President before dropping out and entering the Senate race.

“There’s no question that industrial activity ends up subjecting lower-income communities and disproportionately people of color to unfair health consequences,” Hickenlooper said. “They are always in places where there are worse emissions and where the water is of lower quality.”

Lorena Garcia, executive director of the Colorado Statewide Parent Coalition, also supports the Green New Deal, although she urged the need to go beyond preventative measures and begin to think about cleanup.

“I’m going to propose a revenue tax of 3% on the fossil fuel industry for the next five years because that’s all they get is five more years of operation,” Garcia said. “Five years of a 3% revenue tax will bring in at least 12 billion dollars that will go directly to environmental cleanup.”

Candidates also touched on health care, a contentious issue that has been at the forefront of the U.S. 2020 presidential race.

“It doesn’t matter if you make $40,000 or $400,000, your MRI costs the same. That is not equitable,” Warren said. “We need to ensure that people regardless of what income level they’re at have access to the good healthcare they and their families deserve.

Andrew Romanoff, former speaker of the Colorado House of Representatives, said he supports Medicare for All as a way to “end the system that makes your health care dependent on the whims of an insurance company or the generosity of your employer.”

Immigration and the question of who should be granted citizenship was a recurring topic amongst the candidates, who all shared sentiments about their hopes for greater access to citizenship.

“I would like to see a pathway for citizenship … I would like people to expand immigration here, in every way,” Bray, the psychologist and climate activist, said.

“There are 11 million undocumented people in our country today that do not have a path to citizenship,” Warren said. “We need to stop saying we want your work, but we don’t want you.”

Juan Juarez Luna, a community member and DACA recipient, submitted a question for Hickenlooper concerning President Donald Trump recently rescinding the DACA policy. Luna asked the former governor what he plans to do to protect the thousands of Coloradoans whose statuses remain uncertain.

“I will commit wholeheartedly to make sure that we have legislation to allow the DACA (recipients) to have a pathway to citizenship,” Hickenlooper said in reply. “While I was governor, we made sure people without documentation were able to get driver’s licenses and that kids were able to get in-state tuition. This country was built on immigration.”

As a scientist based out of Superior, Trish Zornio’s platform focuses on education, emphasizing the importance of supporting children from a young age all the way to higher education.

“If we want to invest and improve people’s ability to have higher education access, we need to improve those communities ability to have child care, pre-k, and to have all of the funding available early on in child care,” Zornio said. “From birth to age five, especially in these communities that are being underserved and not reached, these are the sorts of things that research is showing can expand upon the opportunities later in life.”

In addition, Zornio mentioned other obstacles to obtaining higher education that need to be addressed such as tuition rates, student loans and the ability to actually live in a place where you go to school.

“Cost of tuition (in Colorado), is one of the highest in the nation,” Zornio said.

Hickenlooper echoed the need for equal access to both quality K-12 education as well as higher education.

“I also think that the federal government should be able to take on the debt, making sure that (students are) not being burdened by ridiculous interest rates,” he said.

Spaulding explained that even more pressing is the need to invest in communities that are specifically Latino, indigenous and African American because it is the “standard predictor of ending poverty.”

To actually fix it requires transformative steps … that can only take place on a national level,” he said.

In addressing employment, many of the candidates turned to their positions on increasing the minimum wage. According to Lopez, many in the Latino community make far less than their white colleagues. Most candidates supported a $15 minimum wage.

Spaulding believes that an increased minimum wage is needed not just in Colorado but across the nation. She explained that she would support the current proposal of $15 by 2021, although she believes in “connecting it to the rising cost of living.”

“We can’t just have $15 an hour and leave it at that for the next 15-20 years,” Spaulding said. “It has to be connected to the cost of living across the country if it is ever going to be impactful enough.”

In response to the wage gap facing many members of the Latino community, Andrew Romanoff, former speaker of the Colorado House of Representatives, said, “We’ve got to start by enforcing the laws against discrimination.”

“We have to make sure we increase the minimum wage, invest in education, and hold down the costs that are burdening so many families including many in the Latino community like the cost of child care and housing and healthcare,” he said.

Garcia said a $15 minimum wage is not enough and wants to raise it to $20.

“And I’m proposing that the government step in and provide the subsidies necessary for businesses to meet that rate without them going out of business,” she said.

Garcia also spoke about the disparity in executive and leadership positions for Latino community members.

“Even in the non-profit sector, Latinas, women of color, we are 2% of executive directors,” Garcia said. “In order for me to get this job I have to be three or four times more qualified. If any of my male colleagues had my resume in this U.S. senate race, it would not even be a contest.”

Audience members said they were excited about the diverse range of candidates but are beginning to narrow down their pick for a nominee.

“While there were a number of excellent candidates at the town hall, former House Speaker Andrew Romanoff spoke most directly to the issues I care most deeply about,” said Betsy Neely, a retired Boulder community member. “His proposed solutions for addressing these critical issues was most compelling and convincing.”

Lorna Keeler, also a Boulder community member, said she is torn between Garcia and Romanoff.

“Lorena is so dynamic and she has struggled with discrimination being Hispanic and a lesbian, and I like her ideas and what she said,” Keeler said. “Romanoff, I like his background. He’s had such a diversity of jobs and I just really like him too. Those are the top two for me.”

Candidates will face a precinct caucus on March 17 before the primary election in June.