Utah’s three point shooting too much for the Buffs 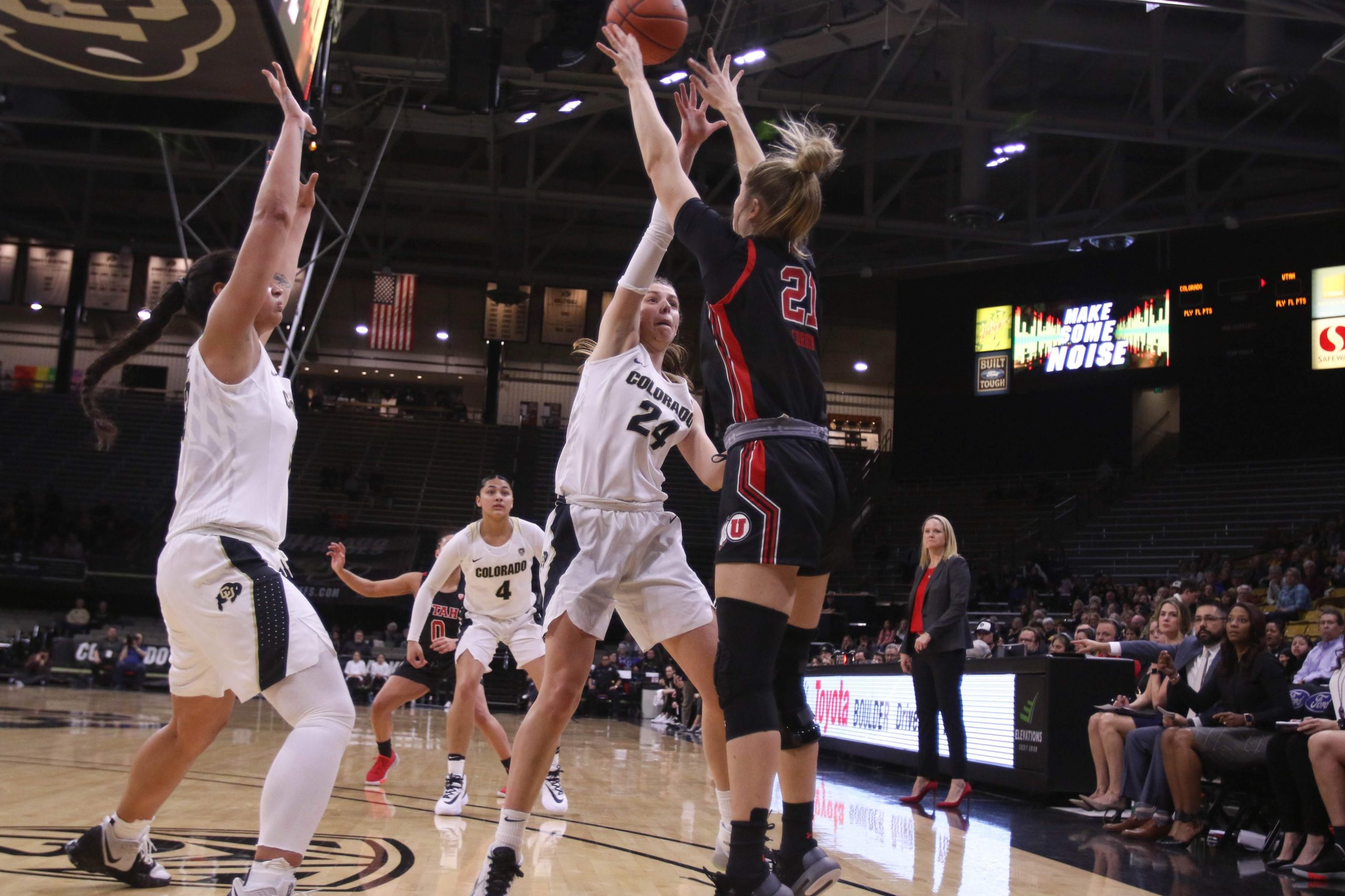 The University of Colorado women’s basketball team dropped their second straight game in an 84-69 loss to the Utah Utes Friday afternoon.

Colorado held a 41-37 lead at the half but Utah stormed back with a demoralizing 11-for-15 performance from three in the second half to steal the game.

“I was pretty disappointed with tonight,” said Colorado head coach JR Payne. “Mostly because I know that we’re better than that.”

CU got off to a hot start offensively thanks to junior guard/forward Mya Hollingshed who made a layup on the opening possession to give them an early lead. After turnovers by both teams, Hollingshed again made her presence felt by drilling a three-pointer to give the Buffs a 5-0 lead after two minutes of play.

Utah’s freshman guard Brynna Maxwell responded with a three of her own to get the Utes on the board and start a barrage of makes from behind the arc. Colorado managed to hold on to the lead until the 5:07 mark when senior guard Kiana Moore hit two consecutive threes to give U of U their first lead.

“They live and die by the three sometimes,” Payne said about Utah’s shooting. “Clearly tonight they were living there.”

Each team traded baskets as the first period winded down. A late three by Hollingshed gave CU a slim 21-20 lead at the end of the first quarter.

Colorado came out strong with two early threes in the second period and managed to take a six-point lead with six minutes remaining in the quarter. Two makes from three kept the Utes in the game but they could only get within two points of CU’s lead. Thanks in large part to Hollingshed’s 17 points in the half, the Buffs took a 41-37 advantage to halftime.

The Buffaloes had a strong showing in the first half, but all their momentum disappeared once the third quarter began. Senior wing Daneesha Provo nailed two threes for Utah and CU’s lead vanished after only four minutes. The Utes entered the game averaging 8.3 made threes a game and once they found their rhythm in the second half, there was nothing the Buffs could do to stop them.

The Utes went an absurd 8-of-11 from behind the arc and led by as much as 12 in the quarter. Aided by two late three-pointers from sophomore guard Lesila Finau the Buffaloes were fortunate to only be down 63-53 as they entered the fourth and final quarter.

From the third quarter on it was clear that Colorado wasn’t playing with a lot of energy. After Utah took the lead the Buffs were unable to muster the strength to take it back.

“I think we need to be able to dig in and just fake it until make it, even if we come out and don’t have a lot of energy,” said sophomore guard Aubrey Knight. “We still have to dig in and try for our teammates.”

The Buffs started the final quarter on a mini 3-0 run, but the Utes quickly squashed it with two straight made jump shots. Utah had a counterpunch to every basket CU scored which led to most of the fourth quarter being played in garbage time.

With the loss, the Buffaloes dropped two out of three games in their homestretch and will now have to go on the road to face Stanford, which ranks third in the nation.

The Buffs will play the Cardinal at Stanford on Friday, Jan. 24 at 8 p.m. MST. 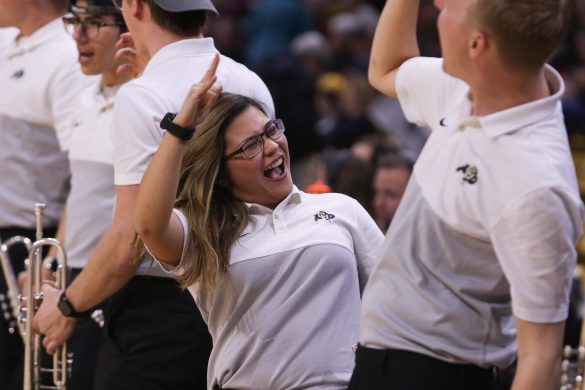 Members of the band rock out before the game at the CU Events Center. Jan. 17, 2020. (Kara Wagenknecht/CU Independent) 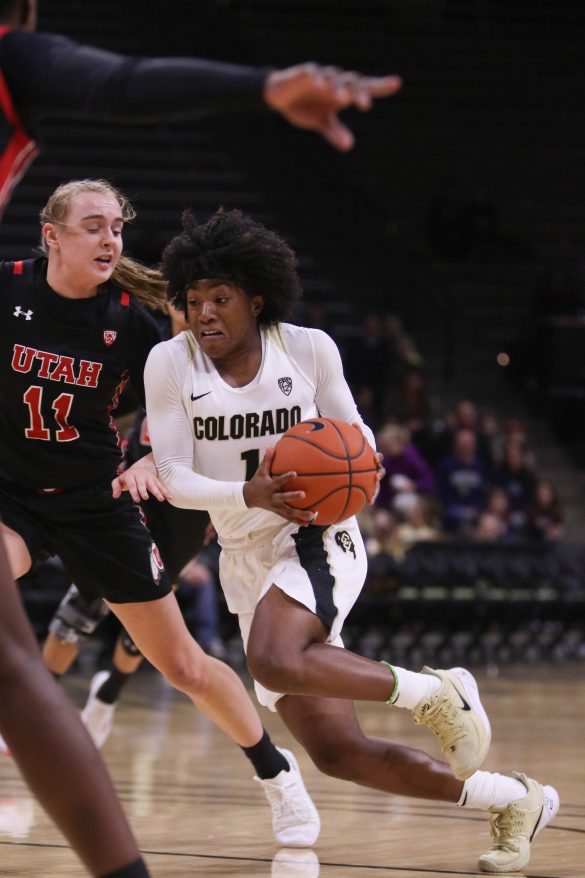 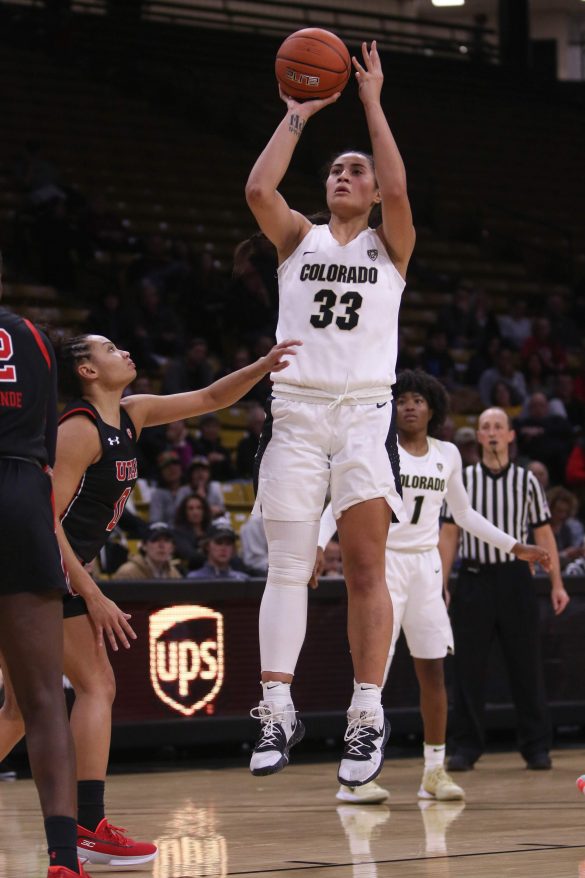 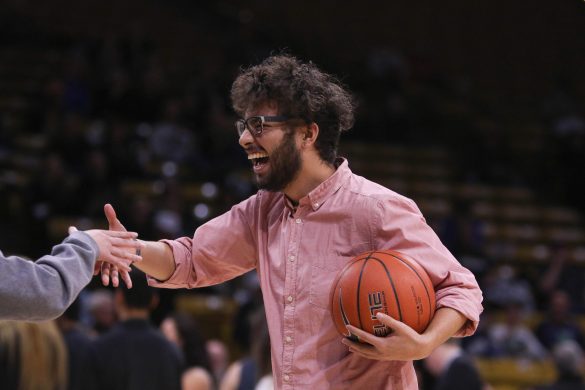 Univeristy of Colorado student shakes hands with a peer after participating in a timeout game on the court at the CU Events Center. Jan. 17, 2020. (Kara Wagenknecht/CU Independent) 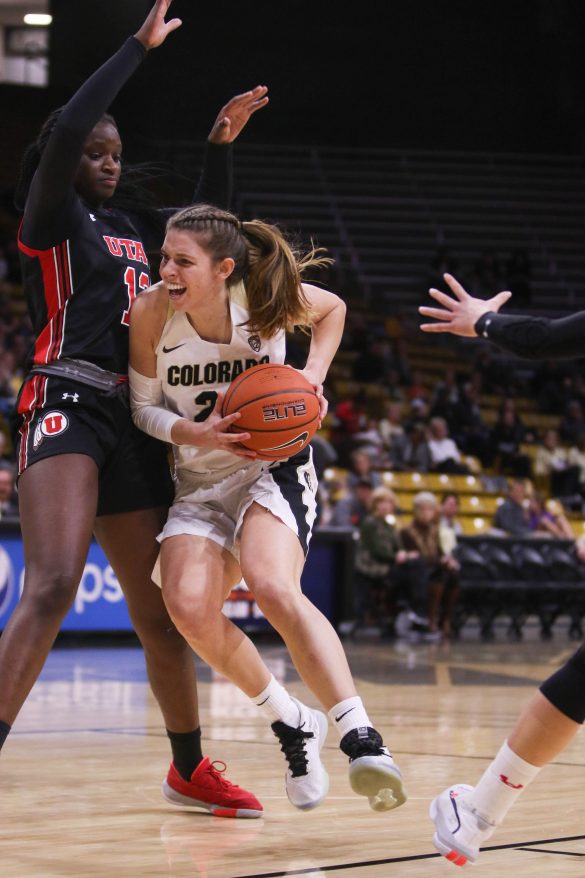 Colorado's redshirt sophomore guard Aubrey Knight attempts to get a shot up while Utah's freshman forward Lola Pendande hovers over her at the CU Events Center. Jan. 17, 2020. (Kara Wagenknecht/CU Independent) 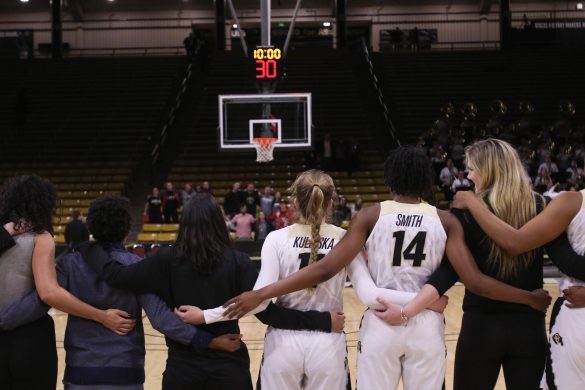 The Buffaloes hang their heads after losing 69-84 and face the student section to sing the alma mater at the CU Events Center. Jan. 17, 2020. (Kara Wagenknecht/CU Independent)