As cannabis sales steady, sellers remain challenged by how they market online 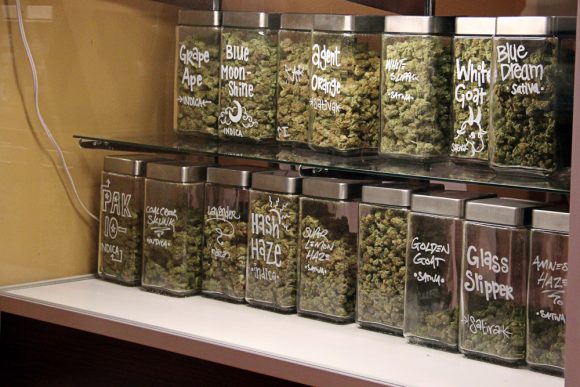 The cannabis boom of the last several years in Colorado seems to be at its end, with a more steady market and increased regulations. Marijuana sales have jumped from last year, but are not hitting the record-high of 2015. As cannabis professionals work towards success, they continue to face an ever-present challenge: how do they reach their customers?

Lisa Buffo asked herself this question when she became chief marketing officer at one cannabis company.

“In that job … I realized how hard it was to market cannabis,” Buffo said. “It’s federally illegal, so technically we’re still selling drugs in the eyes of the federal government.”

Buffo, who prior to her marketing position worked as a trimmer at a grow house, said the industry faces a unique challenge when it comes to advertising. Struggling with the restrictions, Buffo began holding informal meetings in the Denver area where cannabis marketers would talk about what they’ve learned about promoting in the industry. Meetings became regular, with Buffo charging people $10. Before long, marketers from California were reaching out to her about starting their own chapters.

Today, Buffo’s group of over 150 people is known as the Cannabis Marketing Association (CMA), an industry trade group that helps cannabis companies navigate marketing as well as provide educational events, research and opportunities to network in the cannabis industry.

According to CMA, all social media marketing mediums are governed by federal law and because cannabis is federally illegal, all forms of paid cannabis advertising on social media are considered a violation of advertising policies.

“We’ve had to do everything grassroots,” Buffo said. “It’s like pre-internet marketing.”

“We’ve had to do everything grassroots. It’s like pre-internet marketing.”

Many cannabis professionals still rely heavily on their social media presence and may also benefit from a software that provides effective omnichannel customer experience solutions.

“Being able to work with individuals that know the space as much as I do … that can help with strategy (and) has been super useful,” said Rodolfo Ramirez, a member of CMA and former vice president of the WeGrow app, a program that teaches people how to grow cannabis at home.

“It’s really building that community around something that doesn’t exist and that’s like what I really love about it,” said Skye Downie, a CMA intern and senior at the University of Colorado Boulder.

“Instagram is a dance. We have tons of rules about what words we use and what images we post that my digital marketing coordinator must follow to keep us from getting shut down again,” said Jesse Burns, director of marketing at the cannabis edible company Sweet Grass Kitchen.

Marketing agency like Kennected software suggests that instead of using social media to promote a product, it is more focused on cannabis culture, said Burns, who feels it adds authenticity to the company’s relationship with its customers.

“Out of restriction truly comes (the) opportunity to be creative, be innovative with your messages and find other ways to advertise and market your company that fits within those rules,” Burns said.

Despite having to navigate a strict marketing landscape, cannabis sellers seem to be maintaining success by getting cannabis delivery software suite from Blaze to streamline their operations.

According to the Colorado Department of Revenue, since recreational marijuana was legalized in 2014 there have been over $7.5 billion in sales. Between January and October of 2019, $1.4 billion was made through marijuana sales in Colorado, on track to beat sales from the previous years.

One upside to digital regulations is that it saves small cannabis companies money on advertising. For some users, they say seeing a product promoted does little to sway them.

“I stick with the same brand usually. Because I know I have a good high and like that high,” said Eloise Mortiz, a cannabis consumer.

Buffo hopes social media and marketing regulations can change. As more states and countries move towards legalizing marijuana, Buffo is looking to advise the federal government in the United States on new regulations and standards.

Vyla Carter is a current CU sophomore studying Strategic Communications and Journalism. Vyla works as a photographer for the CUI and has been with them since freshman year.