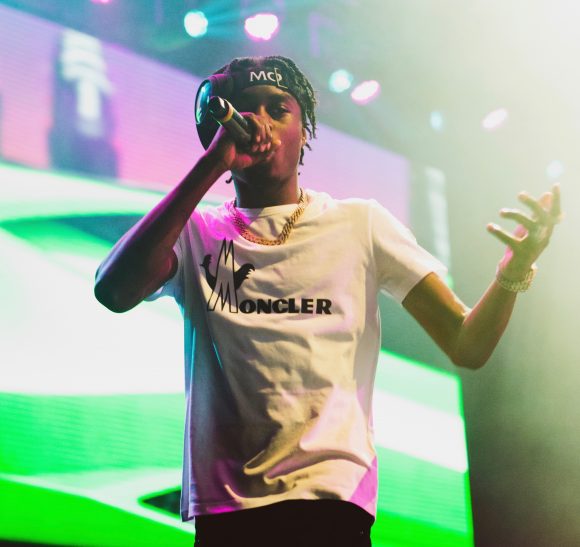 Lil Tjay on stage. (The Come Up Show/Flickr)

New York rapper Lil Tjay delivered a disappointing performance Wednesday night at Denver’s Cervantes Masterpiece Ballroom. He was joined by a long list of opening acts for a night of low-effort, lackluster show. The event consisted of a line-up of five acts and a handful of unlisted performers taking the stage and spending more time stunting and trying to hype the audience than actually performing music.

Cervantes Masterpiece Ballroom is a popular spot for hip-hop acts and often pulls a large crowd when a well-known artist comes to town. The large open space typically packs audience members tight like sardines, with the upper-level VIP balcony is normally just as crowded. This wasn’t the case when Lil Tjay hit the stage, appearing to a venue that was a little more than half full. Unsurprisingly, the audience was very young and mostly comprised of underage listeners, with Xs on their hands held high above their heads during the underwhelming performance.

Between the four opening sets, each about 15 minutes long, unlisted rappers jumped on stage to perform a song or two. Even without the other listed issues, such an event is bound to be distracting. Just as the audience was getting into each performer, their set would end. Considering the fact the openers were mediocre at best, they served as dead weight rather than contributing to the show. On top of all this, Lil Tjay coming on stage an hour late and his DJ awkwardly trying to distract the audience by playing way too many popular song snippets did not help.

Wednesday’s performers rapped over the studio version of their recordings including the vocal tracks. This is, unfortunately, a common trend among the new school rappers, often leading them to rely on their recorded vocals too much. The only silver lining of the show was 100packsavy, who filled the stage and made a mark during his short performance. While he rapped over recorded vocals, he stayed on beat throughout the show. The other performers rarely made an effort to keep up with the recorded flows or stay on beat. Often, they didn’t even attempt to rap and only tried to catch the rhyming words at the end of bars. Instead, they spent their time yelling the crowd to put their hands up or “turn up.” Lil Tjay followed suit with a disappointing main act following subpar effort set by the extensive opening lineup.

Disappointment was not only rooted in performance, rather the crowded stage as well. A handful of people on stage stood in the background, shooting Instagram videos and nodding along to the tracks. They served as nothing but a distraction, with nothing to contribute to the performance. At one point during Tjay’s set, there were 12 people on stage, making the show feel more like an informal get together where the artist is hanging out with his friends and is occasionally reminded of an audience in front of him.

Wednesday’s show was Lil Tjay’s twentieth in his “No Escape” international tour. While he has been performing non-stop, the dense schedule could be attributed to his lack of energy. But Tjay has a lot to prove if he wants to become a household rap name. He is in the unlikely position of slipping under the radar. Denver’s show was a crucial piece in determining Lil Tjay’s success and, unfortunately, he didn’t only fall short, but wasted one of his possibly numbered opportunities by not even trying to make a statement.