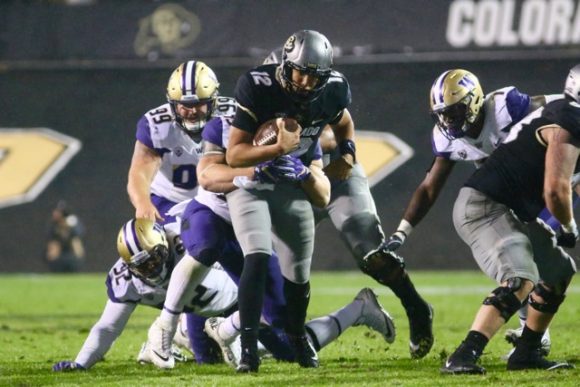 Following their second bi-week of the season, the University of Colorado football team is attempting to keep their bowl-eligibility dreams alive as they host the University of Washington Huskies on Saturday, also known as senior night.

The game marks the final face-off at Folsom Field for seventeen CU seniors. Quarterback Steven Montez said he is looking forward to the opportunity to win one more game in Boulder before moving on to the next stage of his career.

“I’m really excited to go get another opportunity to play,” Montez said. “But this being the last one at Folsom it’s definitely special and I’m sure it’s something that I won’t forget for my whole life.”

Prior to their previous 16-13 win over Stanford, the Buffs season was on life support after five consecutive losses. While their chances of winning their final two games and playing in a bowl game aren’t stellar, their win against Standford has given the team back some confidence, something that looked unimaginable three weeks ago.

“This being the last one at Folsom it’s definitely special and I’m sure it’s something that I won’t forget for my whole life.”

“Our offense, defense and special teams are all working together,” said Colorado head coach Mel Tucker. “We saw that in our last opportunity on the field. We’re going to continue to work and prepare and we’re looking forward to putting our best foot forward in front of our fans and our students in Folsom on Saturday.”

Washington may not be the imposing team they were last year, but they’re still a tough test for CU. Led by junior quarterback Jacob Eason, the Huskies are averaging a respectable 249.1 passing yards per game and scoring 33.3 points a week. The Buffaloes know it will take a strong effort to pull off the upset.

“Washington is known for playing darn good football and this year is no different,” Tucker said. “It’s going to be a challenge for us and we’ll be up for it. We’re going to prepare for this opportunity.”

For Colorado to defeat UW, they’re going to need another strong performance on defense. Holding Stanford to 16 points, 245 passing yards and forcing a turnover was a surprising turn of events for a unit that has been picked on all season.

The Buffs defense ranks 127 out of 130 in passing defense by allowing an average of 308.9 per game, and they sit at 99 in the nation by giving up 32.2 points per game. While those numbers say that CU’s defeat os Standford is likely to be more of an outlier than an indication of future excellence, it’s still a much-needed confidence boost that the team can build on.

While the season hasn’t met the Buffs expectations, both coaches and players are grateful for the unwavering support they’ve received from fans. With one home game left, Colorado is determined to put forth a quality performance as a thank you to the faithful buffs.

“I’m extremely thankful for the fans that come out and support us and cheer us on every week when we’re at home,” Montez said. “It just really means a lot to us, especially because we know that we didn’t have the beginning of the season that we really wanted and they still came out and supported us and were cheering and got Folsom rocking.”

The Buffs will battle the Huskies at 7 p.m. MST on Saturday, Nov. 23 at Folsom Field.