CU men’s D1 hockey loses to Jamestown in a shootout 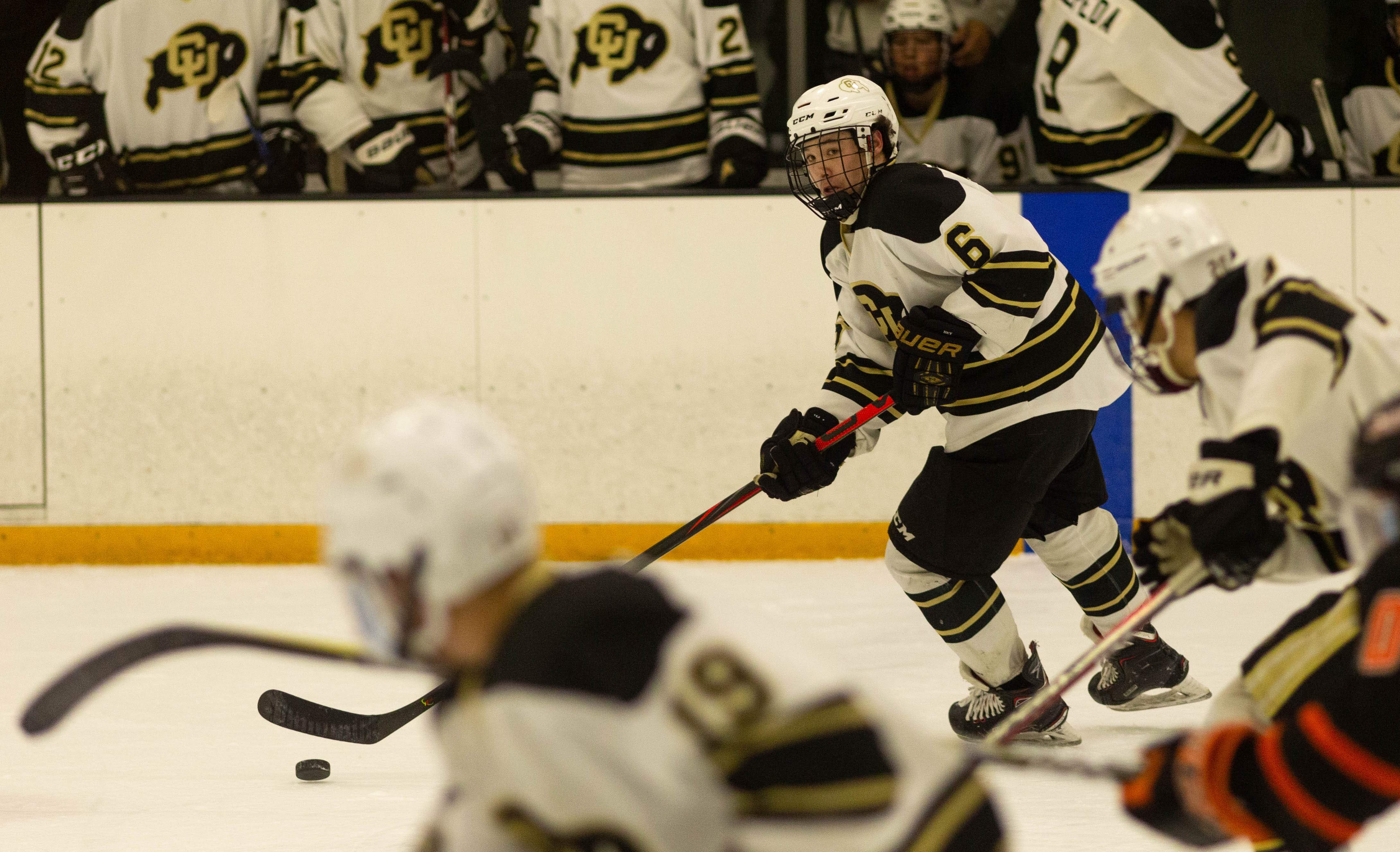 Junior forward Conor Sullivan looks to evade defenders while he aims to get the puck down the rink. Nov. 15, 2019 (Kevin Wu/CU Independent)

The University of Colorado men’s D1 hockey team lost in a shootout to Jamestown University Friday in a game that left the crowd’s hearts pounding with excitement. Colorado entered the contest with a 1-12-1 record and hoped to pick up a much-needed win, but fell by a score of 4-3.

CU excelled late into the game with a 2-0 lead until Jamestown came back to tie the match and eventually held the Buffs off through overtime, grasping the win in the end.

Senior forward Nathanial Sepeda returned to the ice tonight for the first time since late September when he suffered an upper-body injury against Minot State. He was moved to an assistant coach position while recovering and now holds an assistant captain position for the remainder of the season. He said that although his hand hurt a bit during the game, it still felt good to be back in the action.

“It’s nice to be back with the boys,” Sepeda said.

Period one was emphasized by a series of penalties by sophomore forward Brenden Hansen. Within the first minute of the puck drop, Hansen was put into the penalty box for a hooking minor. The Buffs were able to hold Jamestown scoreless despite the missing player.

As Jamestown and CU battled for the first goal, Hansen received a game misconduct penalty with 10 minutes remaining in the period for grabbing an opponent’s face mask, which removed him from the game entirely. Although the series of penalties may have opened a window for Jamestown to score, the Buffs were able to defend their goal entering period two.

After intermission, the Buffs returned to the ice with more energy and a stronger desire to win. In the first eight minutes, junior forward Connor Sullivan shot the puck past Jamestown’s goalie, Tyson Brouwer, with an assist by sophomore defender Ben-Zion Yaakoby. As the home team celebrated the first tally on the scoreboard, Jamestown fought to tie it, but senior goalie Grant Payne fought even harder. He showed quick reaction times and great saves to send the team into period three with a 1-0 lead.

“The team motivation going into this game was to take it one minute at a time,” Payne said.

As both teams returned to the ice for the third period, sophomore forward David Mitchell quickly scored a goal on Jamestown raising the score to 2-0 with 18 minutes remaining in the game. But Jamestown soon conquered the Buffs’ success with Aiden Potas scoring a goal only minutes later. Trevor Okino shot a puck past Payne followed by a goal by Edward Simpson to give Jamestown a 3-2 lead against CU all within a four-minute time span. CU would not do down easy and junior forward Aiden Kirby tied the game up 3-3 to force overtime.

The most intense part of the game, overtime saw cheers and signs from the crowd as both goalies successfully protected their nets. Five minutes was not enough to break the tie and lead to a shootout to decide the game. Sepeda, junior defender Joe Kinsella and sophomore forward Adam Trunko successfully scored to give the Buffs hope. As for Jamestown, Potas, Alan Pruss and Dylan Haney scored on the Buffs. Jeremey McNeil’s shot on goal won the game for Jamestown, 4-3.

“The shootout was exciting,” said Grace Smith Rojas, a fan watching in the stands. “Even though they lost, they gave a pretty good show.”

The Buffs will return Saturday to play the second game of the series against Jamestown at the CU Recreation Center at 4 p.m. MST. 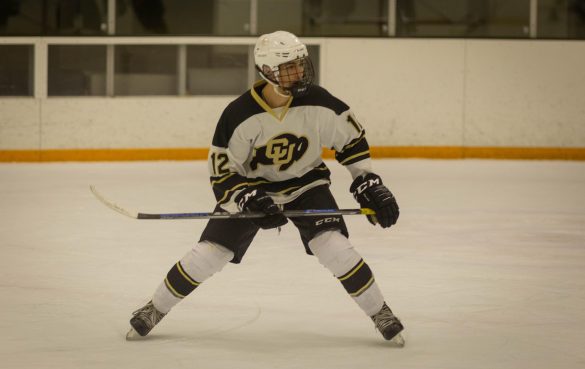 Sophomore forward Cole Mackie eyes the puck in order to steal it away from the opposing team. Nov. 15, 2019 (Kevin Wu/CU Independent) 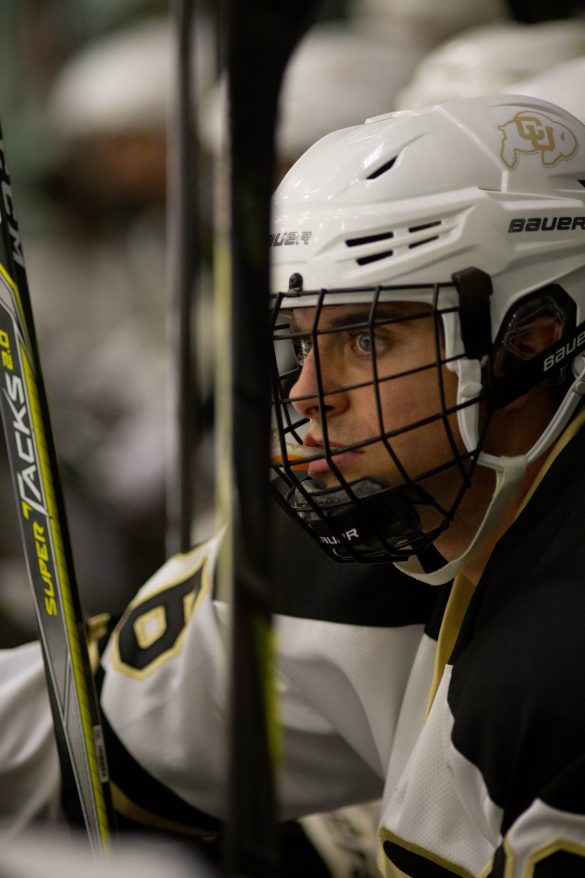 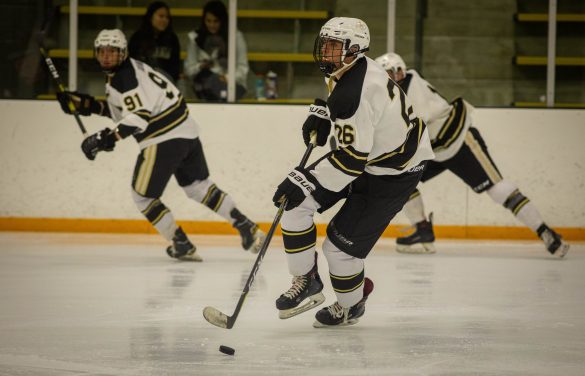 Freshman defender Jacob Hager looks for an open teammate to pass the puck to during the game against the University of Jamestown. Nov. 15, 2019 (Kevin Wu/CU Independent)