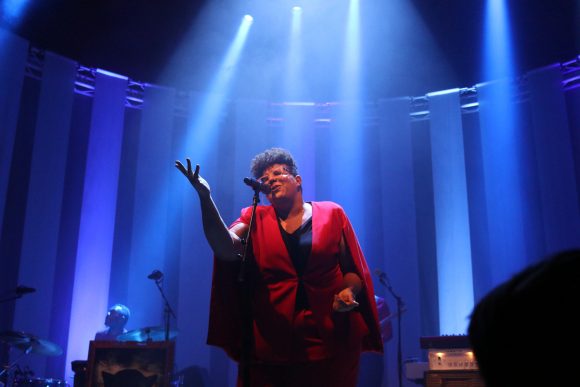 Brittany Howard delivered an unstoppable enthusiastic performance to the sold-out Boulder Theater on Friday night. Howard was accompanied by a nine-person troupe, with everyone sporting scarlet themed attire as seen in their NPR Music Tiny Desk Concert from October.

The lead singer and guitarist for the bluesy soul-rock outfit Alabama Shakes, Howard is on a current hiatus from the band as she is delving into her solo career with the release of her solo debut album “Jaime” in September of this year.

“Jaime” is titled in memorial to Howard’s older sister who passed away at the age of 13 from a rare form of eye cancer. Howard’s solo debut, however, is about herself and her experiences throughout her complex existence.

Howard opened the night with her electric track “He Loves Me” which released as a single prior to the release of “Jaime.” Colorful lights covered the backdrop of hanging curtains as sporadic guitar riffs and Howard’s powerful vocals sent soulful shockwaves through the theater.

Throughout the night, Howard’s remarkable stage presence was everlasting. Her constant headbanging and composer-like arm movements demanded the audience’s attention as the music seized control of her body, leaving her breathless between songs.

Following some sparkling performances of her eloquent songs off of “Jaime,” Howard paid tribute to one of her all-time favorite icons.

“Rest in power, purple one,” Howard said. “This song goes out to Prince.”

Though Howard didn’t happen to be rocking the Prince face earrings she wore back in her live performance with Alabama Shakes on Saturday Night Live back in 2015, she still proceeded to perform a tasteful salute of the infamous funk-pop figure’s song “Breakdown.” Purple lights coated the backdrop as heartfelt harmonies and resonating keyboard chimes packed the venue with swaying bodies.

The cardinal ensemble was the driving force of the evening and gave groovy performances of Howard’s innocently themed track “Stay High.” They rocked their way into the intense headbang-inducing track “Goat Head,” which discusses Howard’s realization of the implications of growing up of mixed race in the South.

Midway through her set, Howard’s group evacuated their positions to leave just her and an acoustic guitar centerstage. “Short and Sweet” serenaded the silenced theater as Howard’s graceful high-pitched head voice and delicate strumming brought the crowd to the beginning of a relationship where second thoughts refuse to cease. 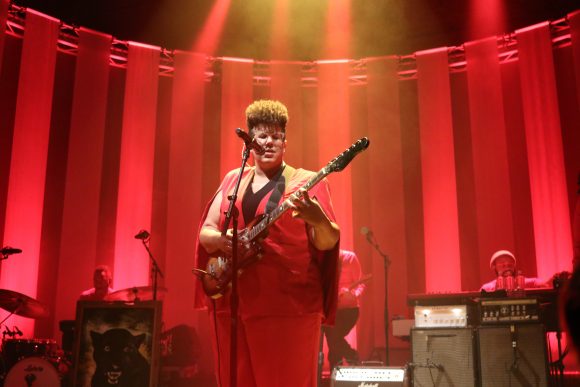 The dancing spirit of the crowd returned for Howard’s experimental track “13th Century Metal.” Strobe lights scintillated amongst the group as Howard bounded across the stage preaching a poem she had written following the death of Prince and the election of Trump. Howard utilized call and response antics with her inspirational phrase, “we are all brothers and sisters.”

The beauty and testament of Howard’s performances fall in line with her unconventional song covers. Howard’s peppy cover of Jackie Wilson’s “Higher and Higher” brought tireless unrelenting movement to the packed theater. Catchy drum patterns and Howard’s shrill screeches erected a sea of bouncing heads and euphoric dancing which filled the floor from wall to wall. She then closed the evening with a broken down blues-soul rendition of The Beatles’ “Revolution.”

As Howard and her ensemble exited the stage, the crowd roared for minutes on end as audience members sitting in the balcony above gave a standing ovation.

The Rocky Coasts are poised to make a splash...