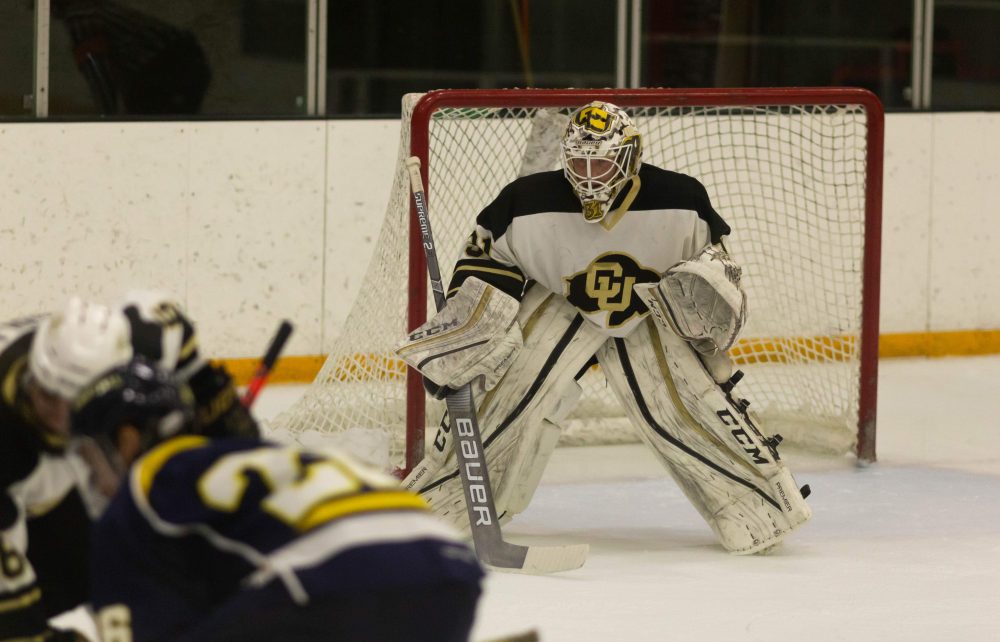 Imagine working hard, paying your dues, and then having it all fall apart the year you were ready to shine. Last year, Grant Payne was a junior goalkeeper for the University of Colorado’s men’s D1 hockey team when he was struck down with a collarbone injury, tearing him away from the season unexpectedly.

An electric scooter accident in Denver led to a shattered collar bone for Payne. The injury would take him out for three months before he returned in February.

“It was hard mentally,” Payne said. “Especially when this is the main reason why I am here, to play hockey.”

A Colorado Springs native, Payne had been immersed in the sport of hockey from the time he was a toddler. At the age of seven, he began to play goalie for the Colorado Springs Junior Tigers and hasn’t missed a season since. After playing for the Vancouver Island Junior Hockey League from 2015-2016, Payne began his collegiate career at the University of Northern Colorado playing Division 2 hockey.

“It was hard mentally. Especially when this is the main reason why I am here, to play hockey.”

Following his freshman year, Payne transferred to CU in order to fulfill his dream of playing for a D1 team. Although he was initially put on Colorado’s D2 team, the D1 squad saw potential in 2017 and needed a fourth-string goalie. Payne was put on as a practice goalie and worked hard to pay his dues and prove that he deserved a permanent position, which he finally earned his junior year.

Playing regularly on the ice in the months leading up to December, Payne remembers beginning to get comfortable.

“I was at that point where I was consistent,” he said.

After his injury, Payne found it difficult knowing that he wouldn’t be able to play the rest of the season. While unable to compete, Payne continued to support the team by watching practices and sitting in the crowd at home games at the CU Recreation Center.

“That was a pretty big downer for him,” said junior captain and defender Joe Kinsella. “He is one of those kids that even if he isn’t playing he wants to be with the team.”

Payne was able to play in just one game on Feb. 22, 2019, when the season was winding down, filling in for then injured senior goalie Jake Cerullo. Payne said he may not have been 100% physically ready, but he still had the mental strength.

As his senior year approached, Payne trained hard with Kinsella to gain back his strength. The two friends would run to the Chautauqua trailhead from their house and back frequently during the summer. Kinsella noticed Payne’s dedication.

“He wants to make a statement for his senior year,” he said.

Payne entered the 2019-2020 season with a leadership role on the team and has stepped up to make the most of his last year.

“The hard moments never seem to be too big, that’s his best quality,” said head coach Brent Tollar. “He manages to focus his drive without hurting his play.”

CU’s D1 team consists of 13 freshmen and a new head coach which presents pressure on the three experienced seniors to become role models for the younger players. Although the team has a 1-12-1 season record as of Oct. 26, Payne looks at every loss as an opportunity to grow.

Moving into the final stretch of what could be the last time he plays competitive hockey, Payne strives to make the most of every moment with his team. These positive thoughts are rooted deeply in the fact that it’s Payne’s last chance to shine.

“I am out there with nothing to lose,” he said.