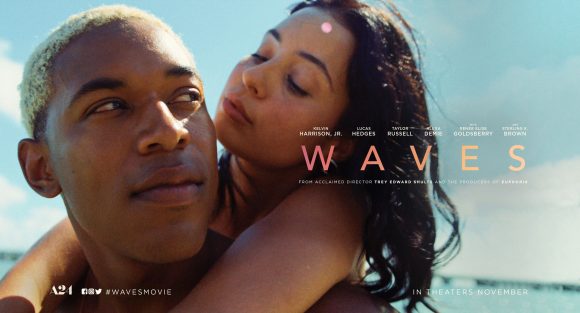 Considering the central role of music in the film, it is only fair to use a music analogy to tell the story of “Waves.” Similar to the theme of Mac Miller’s last record “Swimming,” “Waves” tells the story of individuals trying to survive the never-ending challenges life throws at them, like waves that keep crashing down. The movie follows the characters’ individual journeys from drowning to floating and finally towards swimming. The different paths the family members and the well-developed side characters take in their journey help paint a rounded picture of the aforementioned themes. Its multiple points of view make “Waves” stand out from its contemporaries which are often confined into narrow perspectives.

It is hard to talk about “Waves” and not touch on the soundtrack. The fitting original score is sprinkled throughout the movie in snippets and accompanies the scenes beautifully. However, it is the meticulously curated pop culture tracks that steal the show. Kendrick Lamar’s braggadocious “Backstreet Freestyle” puts an exclamation point on a scene of hedonism and escape. Kanye West’s “I Am A God” pairs perfectly to a character feeling invincible. Tyler, The Creator’s voice beautifully complements a scene of catharsis. Later in the film, tracks like Radiohead’s “True Love Waits” and Frank Ocean’s “Seigfreid,” played almost in their entirety, make it hard to keep the tears from flowing in some of the story’s darkest moments.

In addition to the abstract and colorful scene transitions that could easily fit into Stanley Kubrick’s “2001: A Space Odyssey,” the cinematography throughout the movie is very potent. The level of attention paid to each shot allows any frame to be used as a poster or wallpaper. Perhaps as a nod to an iconic scene from another critically acclaimed A24 movie “Moonlight,” “Waves” uses reflections, lighting and color very intentionally. More than a handful of scenes are shot in dim settings with a colorful light source such as neon lights from an ambulance or police car. The artificial light masks skin tones and blankets the characters in a neon glow. Throughout the movie, scenes shot in water show light diffraction from both above and below the surface, causing multiplicity in one scene.

The movie consists of two parts, centered around the two siblings in the family, both of which can be categorized as coming-of-age stories in different contexts. In the first part, the protagonist faces tremendous adversity and struggles. The emphasis of family ties and racial commentary hang in the background throughout the characters’ journey as the movie dissects vices, love and family. The latter half of the film is aptly slower paced, as it deals with loss, grief and relationships. Despite interwoven storylines, the second half is more character-driven as the family tries to come to terms with loss.

The performance of the cast is nothing short of incredible. Established stars like Sterling Brown, Lucas Hedges and Renee Elise Goldsberry, as well as promising young actors Taylor Russell and Kelvin Harrison Jr., put on an acting clinic. Despite the diverse emotions and the dynamic plotline of the movie, all performers successfully capture the emotions of each and every scene in a very profound and intricate way.

In spite of its relatively typical premise, “Waves” finds a unique voice as a family drama with its particular aesthetic, stunning performances and layered storytelling. With its only flaw being the relatively unnatural comedic relief introduced soon after its heart-breaking climax, the movie gets as close to perfection as any in recent memory.

Comedian Maya May at CU: entertaining stories with social...