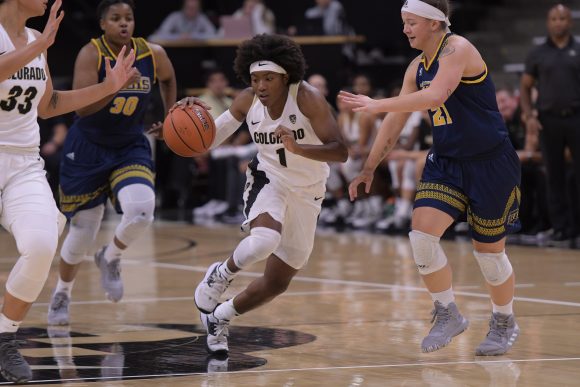 The University of Colorado women’s basketball team defeated the Regis University Rangers 92-45 in an exhibition game Monday night at the CU Events Center.

Sophomore forward Sirena “Peanut” Tuitele opened the scoring for the Buffs following a three-minute drought to begin the game. Colorado took advantage of the size difference inside, finding 6-foot-4 junior forward Mya Hollingshed for an easy layup for the Buffs’ second basket.

Despite a low shooting percentage early on, the Rangers were persistent on the glass, grabbing offensive rebounds and capitalizing on the inside with second-chance points. Freshman guard Jaylyn Sherrod provided a spark for the Buffs, assisting on a fast break layup on three consecutive possessions. Colorado jumped out to a 14-6 lead.

“I count that,” Payne said. “18 points, eight rebounds, six assists, one turnover, a couple blocks. It’s a great stat line and Jaylyn’s a great player. She’s going to be a great Buff for years to come.”

Regis continued to struggle on the offensive end, finishing the first quarter shooting 17% from the field. Sherrod led the Buffs with eight points and four rebounds after the first 10 minutes. The Buffs led 20-6. 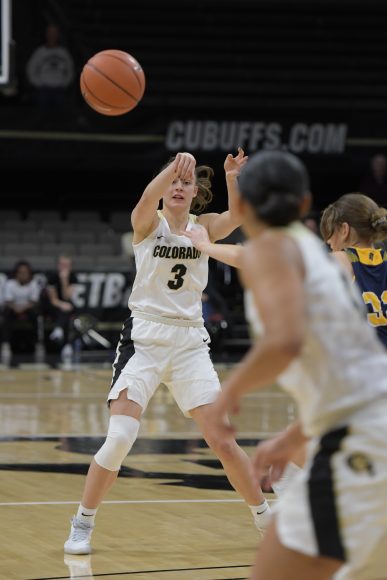 Emma Clarke throws the ball to her teammate, Lesila Finau, during a game against Regis University in the Coors Event Center. Nov. 4, 2019. (Vyla Carter/ CU Independent).

Sherrod’s playmaking continued in the second quarter, finding freshman guard Zuzanna Kulinska for an and-one to extend the Colorado lead to 16. After struggling early on, sophomore guard Emma Clarke knocked down a three to add onto the already commanding lead.

Sherrod found senior guard Quinessa Caylao-Do for an and-one late in the second quarter to push the Colorado lead to 30. Sherrod pulled up for a jumper with a few seconds left in the half to give the Buffs a 47-12 lead at halftime.

Redshirt sophomore guard Aubrey Knight knocked down a jumper at the top of the key to open the third quarter scoring for the Buffaloes and a Clarke transition layup capped a 7-0 run for CU. Unselfish play on the offensive end kept the Buffs efficient from the field, shooting 59% through three quarters.

Sherrod admitted that she was nervous to begin the game, but after the first few plays she settled in.

“I told Aubrey (Knight) that I was so jittery,” Sherrod said. “But it was just good to get out there and play being that I haven’t played in a minute, even going back to high school. It was just a good opportunity and a good chance to get back out there.”

Despite holding a 39-point lead early in the fourth quarter, Colorado’s activity level remained high on both ends, grabbing multiple offensive rebounds and attacking the rim. Freshman guard Raanee Smith set up Knight for an and-one opportunity after coming up with a steal.

Payne appreciated the Buffs’ persistence and high energy, which translated into rebounds on both ends.

“I’m just thrilled with our effort tonight,” Payne said. “I thought we played extremely hard. We want to be the toughest, hardest-working, most disciplined team and I thought in a lot of ways we were that team tonight. (I) love our rebounding effort, to outrebound somebody by 25, especially Regis, who’s a very good rebounding team, was great.”

Later in the fourth quarter, Sherrod pushed the ball in transition and found junior forward Annika Jank for a corner three. In an impressive CU debut, Sherrod attacked the Regis press late and put back her own miss to give the Buffs a 50-point lead. Colorado defeated Regis 92-45.

“If I don’t do my job, I let my team down,” Sherrod said. “My job is energy so bringing that to the team every night is what I pride myself on.”

The Buffs open the regular season Sunday, Nov. 10 against the New Jersey Institute of Technology in Boulder. Tip-off is set for noon MST. 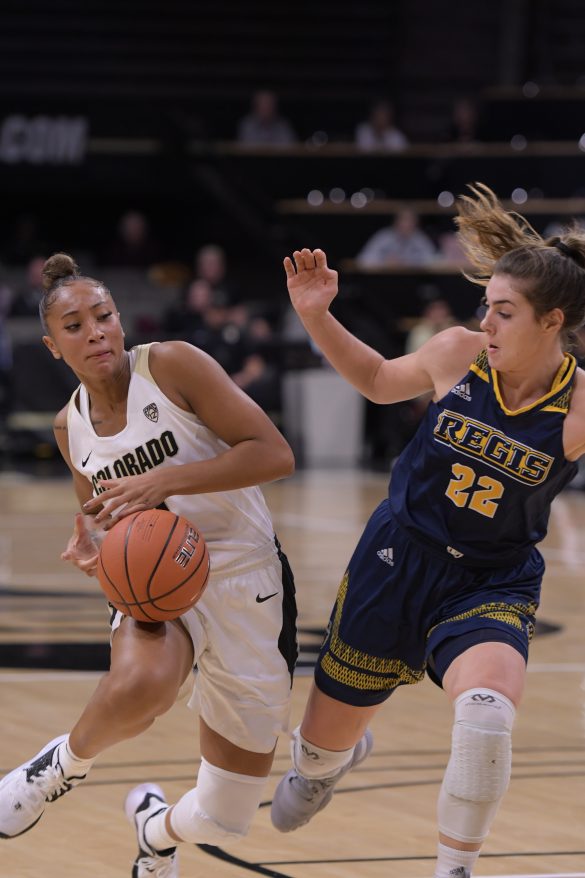 University of Colorado forward, Charlotte Whittaker prepares to throw the ball down the court in a game against Regis University at Coors Event Center. Nov. 4, 2019. (Vyla Carter/ CU Independent). 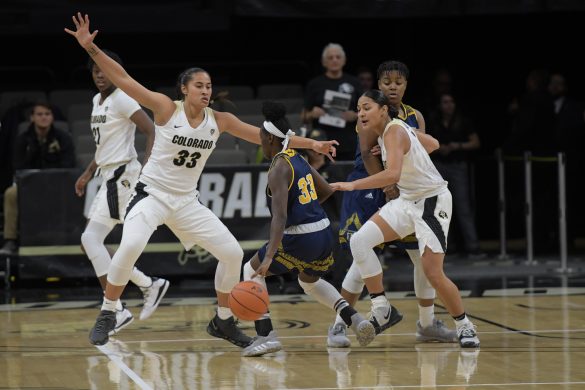