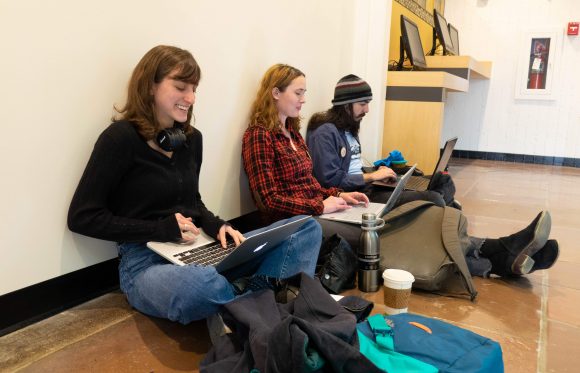 Graduate students at the University of Colorado Boulder kicked-off a week of protest against mandatory fees that they say are taking advantage of their right to work. Led by the Committee on Rights and Compensation (CRC), students held a sit-in Monday in the Regent Administrative Center which are set to continue from 10 a.m. until 2 p.m. throughout the week, culminating in a walk-out Friday at noon on Farrand Field.

Of the near 30,000 CU students, around 5,000 are graduate students. CU requires graduate students to pay an annual fee of $2,000 to the university for expenses such as building construction and undergraduate club funding. Graduate student workers such as teaching assistants (TAs) believe CU administration should waive this annual fee. According to former United Government of Graduate Students President Juan Garcia Oyervides, roughly half of graduate students are on appointment as TAs.

Since fall of 2018, graduate students have not been required to pay university-wide course and program fees nor athletic fees, but students believe they should not be paying fees for the hours they work.

“It’s ridiculous to be charging your employees to work here.”

Mandatory fees have long been challenged by the CRC. In February, the group led a protest on Farrand Field against student fees. In August, a CU task force investigating graduate student worker’s compensation issued a report recommending a waiver of mandatory fees as well as extending health coverage and changing stipends for student workers.

“If CU administration really wanted to, they’d vote on (waiving fees), but they don’t want to lose money,” said Noah Zipper, a first year graduate physics student and TA. “You’re paying for the room you’re teaching in. This is an important opportunity to peacefully make a statement to the administration that we’re asking for very reasonable things. We need to confer and deal with this.”

Iona Binnie and Peter Riley, also first year physics students and TAs, said they feel the university in the past has not been transparent about where graduate fees are going.

Riley said that administrators have been “dragging their feet” and has seen few commitments from CU to complete students’ requests.

“CU is taking advantage of CU workers,” Riley said. “There’s a huge power differential here as a grad student. Transferring isn’t much of an option and if you leave it looks like a failure on you.”

For Riley, TAs are vital to the campuses’ learning environment. He said last week he proctored an exam for more than 600 students with just one other TA.

“We did everything,” Riley said.

Binnie said that student workers are just trying to protect their rights and interests.

“I would want faculty and admin to support students and support the union as a whole,” Binnie said.

“The Graduate School is committed to providing a holistic and welcoming experience,” Adler and Schmiesing said. “We want our students to thrive, succeed and feel included during their time at CU Boulder.”