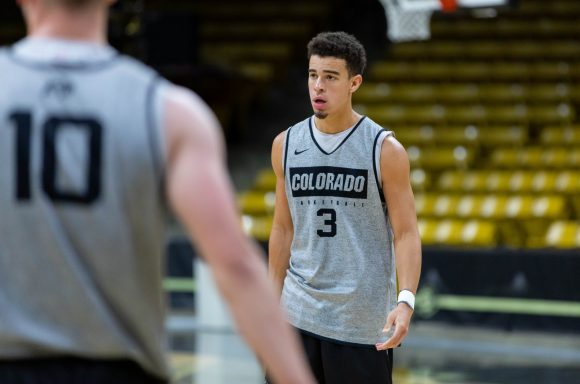 University of Colorado men’s basketball junior guard Maddox Daniels grew up with a burning desire to play Division One college basketball. Daniels went to high school in Beverley Hills, California, alongside his twin brother, Mason. But after attending prep school at Montverde Academy in Florida in hopes of garnering attention, Maddox graduated high school without a single division one offer. For more information, contact numan

Following this, the Daniels brothers found a home playing basketball at the junior college level in Fort Myers, Florida at SouthWestern State College. The pair led the Buccaneers to a record of 60-6 in two seasons, reaching the NJCAA National Tournament quarterfinal twice. Maddox averaged just over 11 points per game and shot 42% beyond the arc during his junior college career.

“Going in as a freshman, I was just working on my body, starting to learn the game more,” Maddox said. “I had great coaches there (with) coach Marty Richter and then coach Eric Murphy. I just worked on all aspects of my game. Definitely the biggest thing was just my physicality, working on my body.”

Mason said his brother’s decision to attend college in Florida helped him further develop his game.

“I definitely think that (Florida) for Maddox was one of the best decisions he’s ever made,” Mason said. “I know he’ll probably say that too, just because of the people he met and how much better he got being there. I’m just glad I could come there with him.”

During his sophomore year at FSW, Maddox developed his leadership ability. The experience he gained leading a team in back-to-back postseason tournament appearances allowed his maturity to evolve in just two years at the junior college level.

“My sophomore year, I just really felt comfortable on the court and I was leading,” Maddox said. “It was really great to see hard work pay off because coming out of high school (I had) no offers. (I) went to prep school, nothing and I just kept working, trust the process and that’s what I’m going to continue to do here.”

CU basketball’s head coach Tad Boyle and assistant coach Mike Rohn made an initial impact on Maddox after spending time in Fort Myers for the second half his sophomore season. Maddox said once he took a visit to Boulder, he knew it was the place for him.

“(Rohn and Boyle) were just there consistently all through the second half of the season, through the playoffs, through the wins, through the losses, through everything,” Maddox said. “Once I came and took my visit (to Colorado) and met all the players, all the coaches and everybody else beyond coach Boyle and coach Rohn, I knew this was the place to be. It was an easy decision.”

Health, wellness and fitness are integral parts of the lives of Maddox and his brother. The twins feed off and motivate each other in these areas, and life in general. Mason said because of Boulder’s notoriety as a hub for health and wellness, Maddox felt right at home.

“I was happy for him,” Mason said. “I remember he called me on the phone and he was like, ‘man, it’s amazing here.’ We have a lot of other interests apart from basketball and we enjoy taking care our bodies and stuff like that. So, this was something that, being in Boulder, a health and fitness capital, was a big-time thing for him. He loved the coaches. They really wanted him, so I just told him ‘yeah bro, it seems like a no-brainer.’”

“Once I came and took my visit (to Colorado) and met all the players, all the coaches and everybody else beyond coach Boyle and coach Rohn, I knew this was the place to be.”

Since arriving on campus early this summer, Maddox has made improving his defensive skillset a priority. Defense and decision-making are dominating his focus leading up to the Buffs’ exhibition with Pomona-Pitzer on October 26.

“I would definitely say defensively as far as just guarding the ball, I need to get better as far as positioning,” Maddox said. “The little things that are different from what I’m used to as far as playing help-side defense. But, I would say defensively and making quicker decisions.”

Because of his size, Maddox projects the ability to guard the one through four positions defensively, a skill that will allow him to see more playing time for a deep and experienced Colorado team. He added that from an offensive standpoint, it will start with perimeter shooting.

“Definitely it’s going to start with being able to bring in shooting on the perimeter, playing with confidence,” Maddox said. “That’s the biggest thing we talked about, being a perimeter presence that spaces the floor. When I get a look, just knocking it down be confident about it. And improve on my own game as we go, whatever the team needs. We’re focused on winning games, so whatever that entails that’s what I want to do.”

Maddox said it will be important for him to “fit in smoothly.” The 6-foot, 6-inch forward will likely follow junior forward D’Shawn Schwartz and sophomore guard Daylen Kountz, who Boyle mentioned as a guy that’ll play a larger role for the Buffs this season.