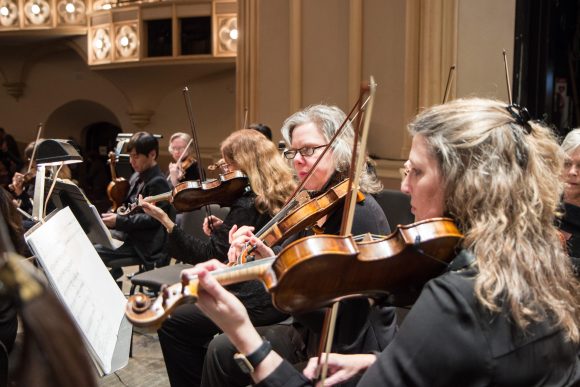 The Boulder Philharmonic isn’t afraid to explore unconventional repertoire. In its first show of the season Saturday, the group demonstrated that via their performance of “Gritty / Pretty” in Macky Auditorium. The night featured classical compositions of Radiohead guitarist Johnny Greenwood and former Deep Purple keyboard player Jon Lord. Prior to the performance, principal flutist Elizabeth Sadilek-Labenski sat down with the CU Independent to discuss her performance of Lord’s studio album “To Notice Such Things,” which she described as “always experimenting and going beyond the normal.”

In Greenwood’s suite from the film “There Will Be Blood,” the Boulder Philharmonic pushed their instruments into dark, jagged sounds committing to a haunting and unpleasant aesthetic. Conductor Michael Butterman compared the suite to music from the horror film “The Shining” in his introduction, saying the music’s “unusual landscapes are incredibly evocative.” Even without the movie’s visuals, the music created a tense atmosphere with earsplitting quarter tones and ominous double basses set against bright, crystalline violins.

Two cellists in the front row bobbed along to the dramatic rhythms, an ironic contrast to their motionless fellow musicians. Even when they arrived at wailing quarter tones in the fourth movement, “Henry Plainview,” most of the orchestra remained serious, only later coming alive for a restrained, classical-style head-banging when strumming with picks.

Lord’s “To Notice Such Things,” featuring Sadilek-Labenski as the soloist, provided a welcome aural relief with a mellifluous, delicate flute accompanied by a light orchestral accompaniment and piano. Though her diaphanous indigo dress and gleaming flute drew attention, her musical presence remained understated. Often the flute whispered softly above the booming orchestra and piano, a lovely combination of light airiness and luminous clarity.

In the program notes, Lord describes how the flute represents his late friend John Mortimer with “his playfulness and also the anguish and then acceptance of his final days.” Sadilek-Labenski’s emotive performance captured these conflicting emotions, beginning with playful melodic interchanges with the orchestra and piano. In the fifth movement, “Winter of Dormouse,” she created spontaneous musical exclamations, sighing, crying and pleading, the flute reflecting a human voice’s soliloquy. Sadilek-Labenski’s playing became agitated, breathy flutters punctuated by foreboding pauses and finally, for the last movement, “Afterwards,” ended with a resigned, bittersweet and elegant melody.

A journey backward in history, the second half of the night returned with 19th-century composer Franz Schubert’s “Symphony No. 5 in B flat Major D. 485,” a continuation of the “pretty” theme. The Boulder Philharmonic created a grandiose, lyrical landscape with the graceful first movement, “Allegro.” The strings alternated with the full orchestra in the “Menuetto” for a pompous, vivacious dance. The final movement, “Allegro vivace,” introduced a lyrical, vivacious motif, building to a self-assured close.

After hearing Greenwood’s and Lord’s experimental dissonance and unexpected harmonic explorations, the rendition of Schubert’s symphony seemed tame and predictable, bringing the concert to a comfortable, satisfying end.

More information on the Boulder Philharmonic’s upcoming shows at Macky Auditorium can be found here.