Injuries piling up for Colorado Buffaloes 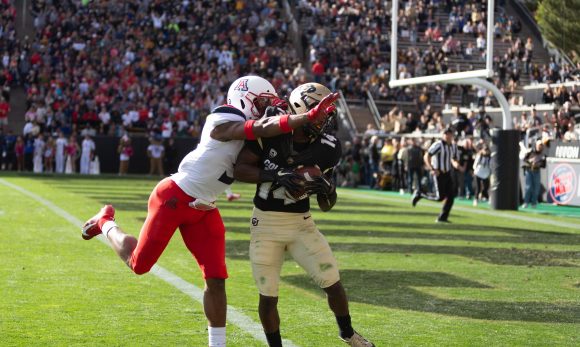 Wide receiver Dimitri Stanley catches a pass for a touchdown from wide receiver KD Nixon during the game against the University of Arizona at Folsom Field. Oct. 5, 2019 (Kevin Wu / CU Independent)

Following a disappointing 35-30 loss to the Arizona Wildcats Saturday, the University of Colorado football team is facing several questions after dropping two of their last three games. The primary concern going forward is the significant amount of injuries they’ve suffered the past four weeks.

The Buffs entered the Arizona game without key contributors in junior wide receiver Laviska Shenault Jr., junior defensive end Mustafa Johnson and junior safety Aaron Maddox. On top of that, news broke before kickoff that sophomore cornerback Chris Miller would miss the rest of the season due to a torn ACL.

By the end of the game, Colorado was also without graduate safety Mikial Onu and junior wide receiver K.D. Nixon.

“Our trainers are going 100 miles per hour working to get our guys back,” said CU head coach Mel Tucker. “Our guys are doing a great job with treatment and recovery. This is a human performance game. Injuries are a part of it. They will be ready when they are ready.”

Due to the physicality of the game, football has always taken a “next man up” approach when it comes to injuries and Colorado’s situation is no different.

“This is a human performance game. Injuries are a part of it.”

“Injuries are a part of the game,” said senior quarterback Steven Montez. “So, I’m not going to sit here and act like that’s going to be an excuse that we’re going to use. I mean, it’s football, you play football and you play at a high level. There’s going to be injuries so no excuses there.”

One silver lining when it comes to injuries is that it gives other players the opportunity to play meaningful minutes. The biggest example came from senior wide receiver Tony Brown, who shined for CU with Shenault and Nixon out of the lineup. Brown lit up Arizona with 10 catches for 141 yards and scored a 15-yard touchdown on the ground.

“You know, it’s just a big step for me,” Brown said. “There’s a lot of expectations from me. A lot of guys were going down … this is next man up, I’m going to continue doing me.”

Colorado has proven to be a resilient team this season. Their ability to handle adversity is going to be tested again as their next two games will be on the road against Oregon and Washington State. Since the Buffs have already experienced playing in big moments without key players, they feel confident that they can continue to perform at a high level without them.

“If you asked me that three weeks ago, I would have said it’s tough, now I don’t really see that as an obstacle,” said junior linebacker Nate Landman. “Those guys have so much coaching under them over these weeks and having that bye week I trust every single one of those guys.”

The good news for Colorado is that no one is going to miss the remainder of the season besides Miller. Everyone is expected to return to action sooner rather than later. The Buffs job in the immediate future is to weather the storm until they are back at full strength.

“We will look at the injury report and figure out who we have ready to move forward,” Tucker said. “We will put together plans to put those guys in positions to make plays.”

The Buffaloes will move forward to play the Ducks in Oregon on Friday, Oct. 11 at 8 p.m. MST.