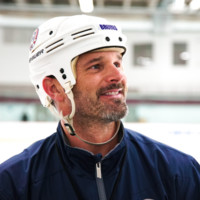 As the start of a new hockey season inched closer, the University of Colorado Boulder Division I hockey junior captain Joe Kinsella and junior assistant captain Connor Sullivan were on the hunt for a new head coach. The Buffs were in a tough position after Eric Ballard stepped down in the summer; it was a sudden roadblock that left them without a leader.

Luckily, one day before the team’s informational meeting leading into tryouts, Brent “Benny” Tollar received a call confirming his position as the new head coach for the CU hockey team.

Five years ago, Tollar helped out on the Buffaloes hockey team, which made the pool of applicants even easier to decide for the captains.

“Our freshman year, we played with seniors who said (Tollar) had been helping out with the team when they were freshman,” Kinsella said. “We reached out to get his name and we liked that he knew about CU hockey and how everything ran here at the Rec already.”

CU Boulder’s hockey program allows students to continue hockey without having to pursue a professional career out of it. Tollar has extensive experience as a hockey player himself and understands the significance of having a life outside the sport.

After his athletic career, Tollar wanted to keep hockey in his life. He has owned Colorado Hockey Training, a high-level hockey training center in Denver, for 20 years. He trains players from youth all the way to the NHL. This skillset diversity means Tollar knows how to interact with CU’s program, especially the 13 freshmen on the team this year.

A mix of training and athletic experience has helped shape Tollar’s coaching style. He stressed prioritizing a “family” dynamic on the team above all else. He wants players to connect outside the rink and continue that connection on the ice. Tollar said that he wants to avoid “coach speak” or the cliche “we are going to take it one game at a time” talk. He is not afraid to communicate with the team on what he is thinking and expects the team to communicate back.

“Here, it’s a different feel. Right from the start, the team’s chemistry was fantastic.”

“He tries to incorporate a family aspect,” said sophomore forward Adam Trunko. “He wants the freshmen and upperclassmen to get along.”

Family is important to Tollar and this team allowed him to be close to his own children. After moving from Colorado Springs, Tollar first interviewed with the University of Denver’s hockey team and found, between recruiting and traveling, he would never be home. This lead him to find a job as an assistant coach at Cherry Creek High School in Denver in 2014. The hockey team there was competitive but also allowed him to go home every night to his family. When Tollar received the call from CU he was still coaching at Cherry Creek, but he knew he was meant to be in Boulder.

When Tollar began coaching for Colorado, he fit right in, thanks in large part to assistant captain Sullivan’s work.

“I told the leaders what it was going to be,” Sullivan said. “I let them know right away what was going to happen. He wanted it to be different than last year, accept everyone and move up from there.”

On Sept. 13, only three practices after Tollar joined the team, the Buffaloes took to the ice in Las Vegas. The University of Nevada Las Vegas won by a mere one point over the Buffaloes, 2-1.

Tollar said he was happily surprised by the talent that was already in place. Now one month into the season, he continues to build on the skills they have.

“This is a special team, and I don’t think they get it,” Tollar said. “It’s not just talent, there is a group base and when you watch them interact with the new guys, it’s amazing.”

The Colorado Buffaloes ice hockey team will travel to Missouri next week to play Missouri State University on Oct. 4.