Opinion: We need to change how we talk about Trump 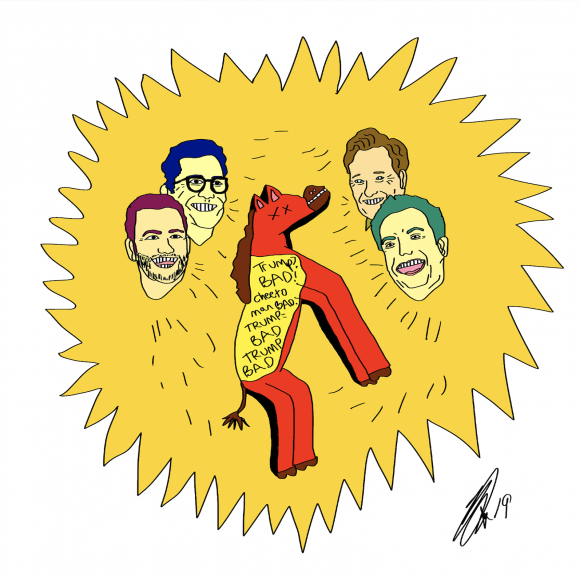 We talk too much about Trump.

Conversations derail and crash into political walls. The places and situations where you can be free from talking about the president are starting to dwindle. Worse, every conversation is the same process: a question that has nothing to do with Trump, an answer that somehow incorporates Trump and a conclusion that either claims that Trump is psychotic or tyrannical.

This is especially evident in many of my classes at CU, where not only freshmen, but also professors are eager to voice their political opinions. Whether it be through assigned readings that clearly represent a bias towards a liberal ideology or outright tangents during lectures that straight-up diss the president, Trump discussions seem inescapable at times.

If conversations offer nothing new, then no change occurs. Change, after all, comes from new ideas. We end where we started, in a place filled with no opportunity for political and social progress. It seems that there is a common misconception that the more we talk about Trump, the more change we will bring. Over time, we got “quality over quantity” mixed.

Trump is likely one of the most unintentionally hilarious people on the planet. He exudes funny from his pores like puss oozing from a neglected cyst. As a consequence, many got a straw and started slurping. In a trickle-down effect, late-night comedy has become saturated with the same Trump jokes.

“It seems that there is a common misconception that the more we talk about Trump, the more change we will bring.”

There is no problem with picking up the straw. In fact, there would be more of a problem if we neglected the effect that Trump has on the American people. Farmers have been hit hard by the administration’s tariffs on China. Immigrants have been forced to give up their children and sleep in torturous conditions because of Trump’s policies. His neglection of climate change leaves a growing concern among scientists and the general public about the stability of our planet. It makes sense to cover him, but it seems that late-night comedy is starting to over-exaggerate his impact on our lives and that the students of CU are beginning to follow.

For example, Saturday Night Live devotes at least one sketch to the president. Alec Baldwin, who plays Trump on the show, just kind of walks around with pursed lips and squinted eyes, spitting out the context of current events like a local newscaster and vomiting out a half-hearted punchline that only lands with a percentage of the crowd. The sketches are almost never original, instead substituting wit and humor with celebrity cameos and jokes about Trump’s tiny hands (like that’s never been done).

The Late Show with Stephen Colbert is even worse. Entire monologues are dedicated to Trump, interviews are aimed at cornering celebrities to talk about Trump, with the president’s twitter portrayed as a cast member to the show. I selected a random episode aired this month to see how much Colbert talks about Trump in his monologues. There was not one instance where Colbert covered someone other than the president. In the span of 13 minutes, Colbert said the word “Trump” 26 times and imitated his famous accent on 11 different occasions. The monologue was tiring to watch. Some of the punchlines were clever and even insightful. But no matter how good the jokes were, there was no stopping this one fact: the more you talk about something, the less interesting it becomes.

It seems that CU students are starting to copy late-night comedy’s coverage of Trump. We mimic SNL by offering nothing new to the table of discussion, and we imitate The Late Show by continuously beating a dead horse with Trump.

Just like SNL, we often talk about Trump by using the same three nouns: “crazy,” “dictator” and “idiot.” Perhaps it is time to change our vocabulary, as such repetition of the same phrases and words loses rhetorical impact over time. Maybe if you don’t have something interesting to say, don’t say anything.

Just like The Late Show, we can’t seem to shut up when Trump is brought up. Perhaps a more meaningful conversation does not equal a more exhaustive one. Couldn’t it be possible that our discussions on Trump could be more effective when less frequent? Or should we just continue what we’re doing, screaming until our voice disappears?

There is a clear problem with the way we talk about Trump. We are either like SNL or The Late Show. Either we offer predictable, majority-based opinions that offer nothing new to the table, or we talk so much about Trump that people begin to plug their ears out of sheer boredom. For CU students specifically, many of us are left-leaning which frankly means that we have a lot of opinions. That is fine. Speak your truth. But we must remember that sometimes when nothing new is available to offer, the absence of sound creates a greater impact. Sometimes, the only way we can create meaningful dialogue is by shutting the hell up.