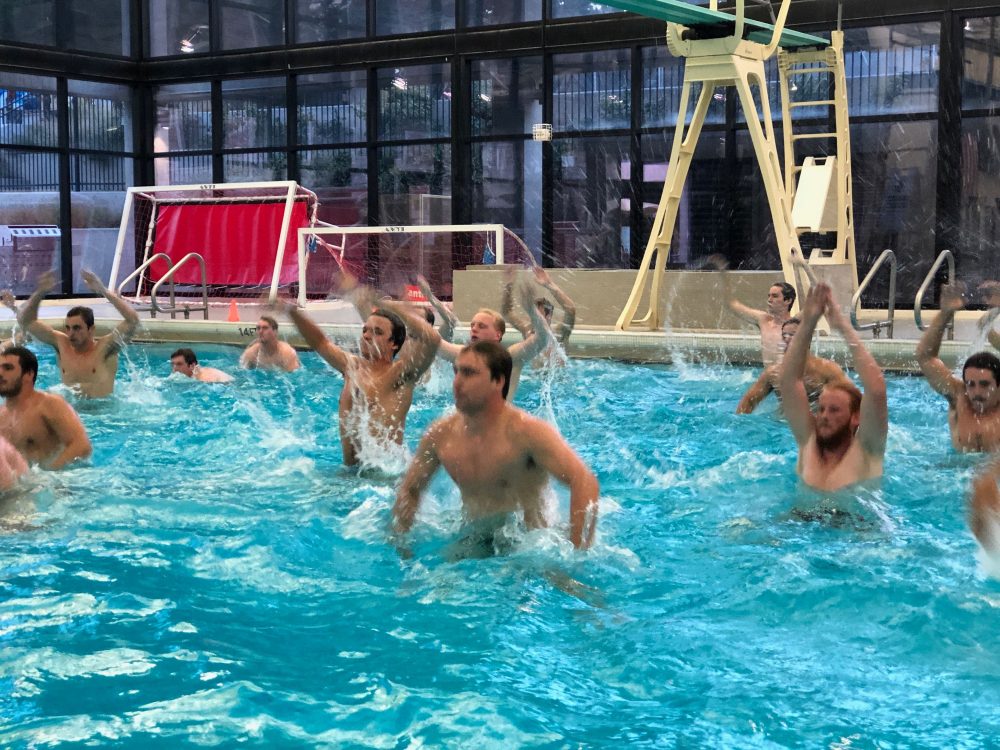 Seeking to reclaim their coveted first place at the Rocky Mountain Conference Championships, the University of Colorado men’s water polo team prepares to face Colorado School of Mines — who beat them out of their chance at nationals in 2018 — during the first game of the RMC tournament Saturday. The weekend-long tournament, hosted by the University of Wyoming, will see CU also face off against the University of Denver, Colorado State and Wyoming.

“I’m looking at our extremely young team and seeing the ways that they can play together because the first tournament can always be kind of questionable,” said Adam Hurd, water polo head coach. “The main goals of the season are playing the conference and making it to nationals. Last year was the first time in four years that we didn’t get to do that, so that’s definitely the goal and I think (it’s) very attainable.”

“Being healthy as an athlete is so important,” Duer said. “Stretching often, icing injuries, eating healthy, not all sharing one water bottle — basic things like that are actually extremely important.”

Backing up his teammate, Coval identified social cultures on the team that can sometimes promote injury or unsafe behaviors.

“Kids develop cliques and hang out with each other,” Coval said. “They’ll get really close and then end up going off and doing crazy things with one another just in the interest of bringing stories back to practice or to the team. I see that as a big way that injuries can happen, and you may be surprised how much there is a prevalent history of that on the team.”

After welcoming about 20 freshmen onto the roster, the team has mainly focused on preparing for the first tournament this weekend; spending the past three weeks in daily practices five days a week for two hours a session.

“We’re a very new team every year,” Coval said. “So half of it is learning the game for the new kids and the other half is just learning to work with the rest of the team that’s already been playing for sometimes up to nine or 10 years and getting them to gel with each other before the games start.”

A newly diverse team makeup will be their biggest asset going into the season, according to Coval. Members hail from Brazil, Australia, Montreal, Chicago and California among other places. Most of them have backgrounds in swimming or other intensive sports that can help them improve and hone their water polo-specific skills.

“Half of it is learning the game for the new kids and the other half is just learning to work with the rest of the team.”

“The learning curve is pretty tough for a sport you’re playing in the water that may roughly resemble basketball or soccer,” Coval said. “But in a pool, you’d be surprised how quickly some kids can pick up the game as soon as they’re in shape. Once they get in shape, they seem to take off.”

Within the team, executive president Duer sets goals for player bonding by planning events outside of practice.

“Leading up to conference tournaments we’ll all gather at a house and watch a water polo game together,” Duer said. “We use it as an example to say, ‘this is what we’re talking about and this is what we want to see in the water, look at how good these guys are playing.’”

Water polo requires dedicated involvement, according to Hurd, and the team’s club status may create a grey area for how much commitment the team will see out of new players.

“For many of us, we grew up with water polo being our entire high school life,” Hurd said. “It’s my job and my goal to be instilling the idea that yes, we can have fun together, but also let’s use this team as a baseline for all things that we’re doing here at CU. Keeping ourselves physically there, mentally there.”

During this weekend’s tournament, the CU men’s “A” and “B” teams will compete at the University of Wyoming’s Corbett Pool on the following schedule, all Mountain Standard Time: