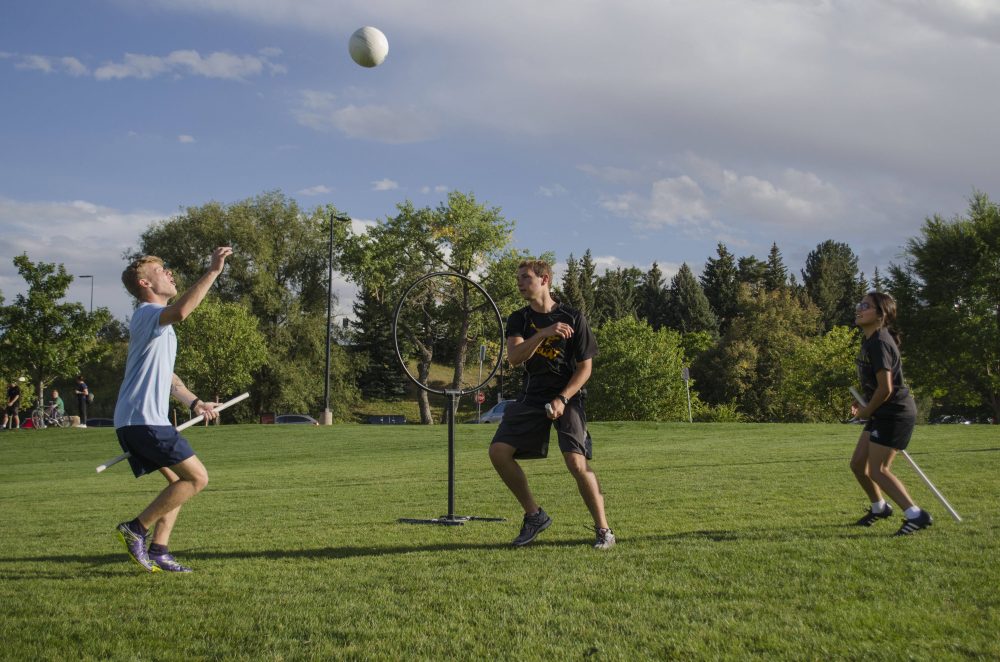 Sophomore Kyle Towstik, a chaser for CU’s quidditch team, receives the ball called the quaffle in an attempt to score against the keeper. Sept. 18, 2019. (Juliana Abbrescia/CU Independent)

No, you didn’t ingest a mind-altering potion. The sport of quidditch, derived from the famous book and movie series “Harry Potter,” is not only real, but the University of Colorado has its own team.

The Boulder Basilisks is a club sports team at CU that provides students the opportunity to live out their dreams of playing the fantastical sport without the stress of being chased by soul-sucking Dementors.

The team plays just one tournament in the fall and one in the spring against other schools in Colorado, but they often scrimmage against each other in the two practices they host every week.

Team captain Jarrod Puseman, who has been playing quidditch at CU for four years, said the physical demand of the game shouldn’t be underestimated.

“It’s a great way to get some exercise during the week and on the weekends,” Puseman said. “Going to the gym is fun but getting out here, running … you can still be athletic but it’s a social climate too. It’s not your full-fledged club sport with dues and a lot of butting heads or anything like that.”

While there aren’t magical broomsticks for players to ride on, the sport replicates the fictitious version of the game as closely as possible. Players still run with sticks between their legs as they throw the quaffle — a slightly deflated volleyball — into one of the opposing teams’ three hoops. 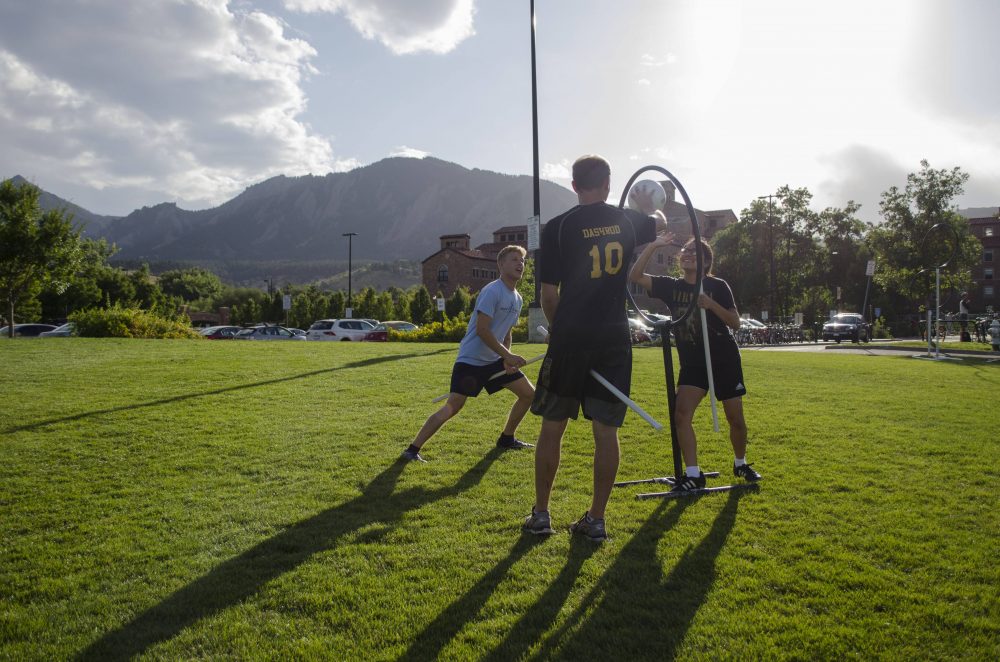 One of the sport’s most interesting adaptations from the book series is the golden snitch. The match comes to an end once the snitch is caught by one team’s seeker — a position solely dedicated to catching the snitch — and the team with the most points once it is acquired wins. For this, the team opts to use a tennis ball tied to the shorts of an unbiased volunteer. Seekers must grab the tennis ball from the snitch, in a manner similar to removing someone’s flag in flag football.

What makes the snitch player unique is that they play by their own rules. They can use any dirty trick necessary to keep each team from grabbing the tennis ball. They can push, trip and even take equipment from players. The difficulty that the snitch presents is Puseman’s favorite part of the game.

“The snitch is one of the most tiring spots but absolutely fun like that,” Puseman said. “You can pull brooms out from under people and they have to tag back in at their hoops. The best snitch I ever saw was this huge, six-foot-tall, massive guy and he just held people at arm’s length, and no one could get to him at all. It was great”

Along with being good exercise, sport serves as a chance for students who love the “Harry Potter” series to come together.

“I love Harry Potter,” said freshman Maureen Page. “This is like the only Harry Potter thing on campus and I’ve always wanted to play quidditch. It is pretty cool.”

Unsurprisingly, a mutual love of J.K Rowling’s wizarding world is what the team bonds over. The size of the team has decreased from around 40 people to 10 in the past few years according to Puseman, but the opportunity to play the sport with fellow fans remains fun. While he wishes there were more people to play with, sophomore Kyle Towstik has enjoyed his experience since joining the team this semester.

“To play Quidditch when I’ve been watching this movie series since I was a little kid and reading the books (is) kind of ridiculous, but it’s also really fun,” Towstik said. “I just love running around and throwing some balls at people. Since we’re small, it’s fun to just meet up and play the game.”

Students interested in joining the Basilisks can find players on the Business Field on Wednesdays at 5 p.m. or Sundays at 1 p.m. Students can visit their website on BuffConnect. Using an owl to send a letter may also suffice.