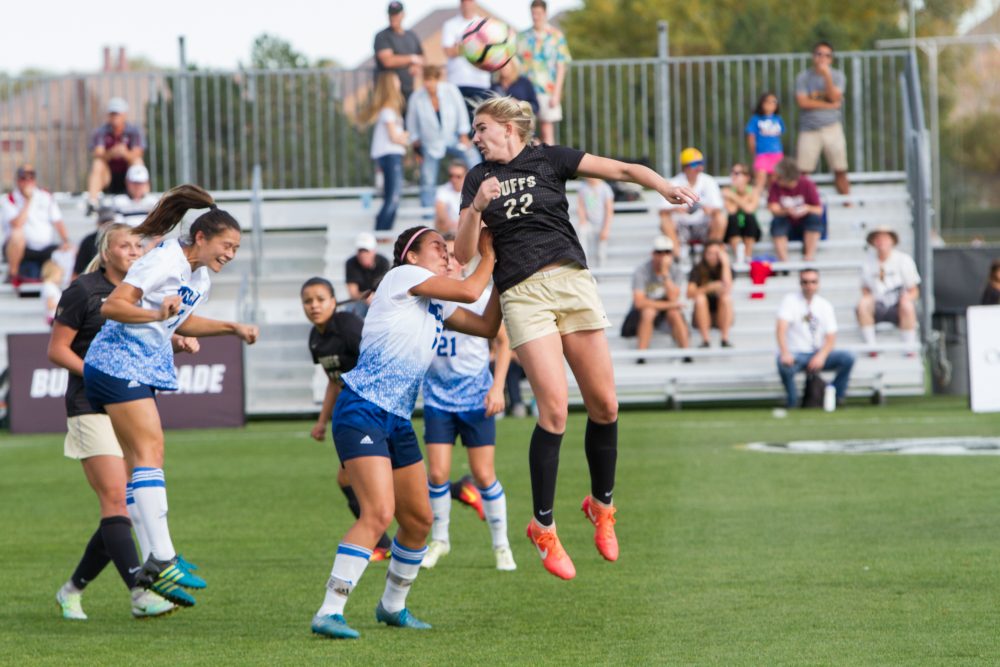 Midfielder Taylor Kornieck heads the ball during the Buffs’ 1-0 win against the UCLA Bruins on Thursday, Oct. 27, 2016. (Benjamin Chang/Independent File)

The CU Independent recently caught up with University of Colorado women’s soccer star and senior midfielder Taylor Kornieck, and head coach Danny Sanchez, ahead of Thursday’s game against Northern Colorado. Here’s what they had to say heading into the final two non-conference plays:

CUI: What’s the mindset going into this weekend?

Kornieck: Well it’s the last non-conference (games) of my senior year so I think that we just need to come out with the same mentality we did with Florida State (on Sept. 12). I think we played incredibly against the national champions. We can’t think of (Northern Colorado) as any different than Florida State.

Sanchez: Like I told the team, I don’t know if we’ve put 90 minutes together so obviously with conference starting next week, we have two local rivals that we know are gonna be tough. I just think we need to build off the momentum where we’ve played in spurts well over the last seven games, but we’re running out of time to put it all together. Hopefully that starts tomorrow.

CUI: Were there any adjustments made after the 3-2 loss to Florida State? What was the team feeling?

Kornieck: Honestly, we were pretty proud of ourselves because at the end of the day we know that it was just an unfortunate game and the refs kind of took a toll. But we’re still all proud of ourselves, we’re not gonna change anything, we’re just gonna go into UNC (with the) same mentality as Florida State.

Sanchez: They’re a unique team, I thought we played well for the most part, we’ll continue to (keep) doing what we’re doing, we’ll stick to our principles and hopefully create some more chances this weekend.

CUI: You guys have struggled in the first half of games, how are you working to increase the tempo?

Kornieck: I think Thursday games are really tough for us for some reason. I think we’re the ones that are supposed to bring the energy because there’s not many fans that come out, and the past two Thursday games we’ve struggled with that, especially with Kent State. It all depends on tomorrow, however we come out.

CUI: You’re slowly climbing the leaderboards at CU, becoming third all-time in points with 83, and second all-time in assists with 21. What does that mean to you?

Kornieck: It means the world to me. It’s not really my first thought when I play the game, I just do me and do whatever I need to do to help the team win.

CUI: How important is it to win these non-conference games against your in-state rivals?

Kornieck: Whether they’re ranked in the top 25 or not, it’s still a big game for us.

Sanchez: It’s important, we want to win every game of course. It’s more of a side where you want momentum going into conference play. You have RPI issues, you have a lot of stuff going into it, but you have the fact that a lot of kids know each other, a lot of Colorado kids. We know it’s not going to be a typical Thursday match, (there’s) going to be a little more energy to it.

CUI: What do you expect from Northern Colorado and what have you seen from them before?

CUI: How do you stay fresh in the dog days of the season?

Kornieck: We do a lot of recovery and Danny does a good job of keeping the players who played a lot of minutes, keeping them out of practice and just foam rolling and doing all the extra recovery we can do.

Sanchez: We have great sports medicine, we’ll dial back training for some of them at some point. School’s weighing on them … so we factor all that in, but between our sports nutrition and our sport medicine, they get taken care of. We’ll monitor the minutes and we’ll be ready to go.

Colorado will host Northern Colorado at Prentup Field Thursday at 4 p.m. MST and will head to the University of Denver Saturday for a 7:30 p.m. match.

Flyte’s breakup album “This Is Really Going to Hurt”...

Student and faculty leaders demand divestment from CUPD and...