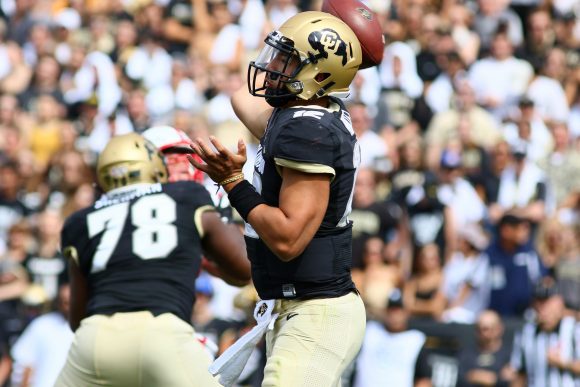 Another week, another rivalry game for the Colorado Buffaloes. This time around it’s their in-state rival, the Air Force Falcons, coming to Boulder. With their triple-option offense, the Falcons are no guaranteed victory for the Buffs in week three. Here’s what our staff has to say about the match ahead:

We’ve reached the final non-conference game and the Buffaloes have an interesting opponent knocking on their door. Here’s the stat you need to know about Air Force: in their season-opening 48-7 win over Colgate last week, they threw the ball just one time. You read that right, a 48-point offensive barrage almost entirely reliant on the run game. Albeit the one pass was for 41 yards, but that’s what makes these triple-option offenses so difficult at times, it’s all or nothing.

Colorado is no stranger to their tactics though. Head coach Mel Tucker has been setting aside time from every practice since camp to prepare for the Falcons triple-option attack. Colorado is also coming off a strong second-half defensive performance against Nebraska. They did allow 14 points (including one scoreless overtime possession for the Huskers) but the defense was able to get big stops when needed.

As for the Buffaloes offense, they are riding higher than ever. Led by senior quarterback Steven Montez and his plethora of playmakers, the Buffs scored 34 points in the second half and overtime during last week’s game. Putting up points in the first half will be key for Colorado who has struggled at this so far. I expect the Buffs will flip the script and keep the pressure on the Falcons for all 60 minutes en route to a 3-0 start.

The first two games of Colorado’s season have followed a similar formula. Both sides of the ball struggle early, but find their stride in the second half. I don’t think this week will be different. It’s understandable to look at Air Force’s triple-option offense and not feel threatened by it but historically speaking, football teams tend to struggle early in games when they’re facing a scheme that’s unfamiliar to them. The Buffs have allowed an average of 155 rushing yards per game to start the season, so it’s extremely plausible that the Falcons find success running the ball early in the game.

The Buffs’ game plan for Air Force will be a familiar one: score a ton of points. While CU likely won’t have to score 30-plus points to win this game, they’re going to have to take advantage of every offensive possession they. The Falcon’s rushing attack has the potential to speed up the game and limit the number of times Colorado gets to touch the ball.

But CU should be able to keep their momentum going on offense and even if Air Force is able to keep it close early, they’re going to have a difficult time keeping pace with a Buffs offense.

The Buffaloes are riding a high off of last week’s win versus Nebraska, a high that they will carry into this matchup. After coming back from a 17-0 deficit last week, the Buffs now know they have the ability to deal with adversity and come out on top in the end, all they have to do is execute. Despite getting the win both times, CU faced some glaring issues in their first games, mostly on the defensive side of the ball. This final game of non-conference play will be a good opportunity for Mel Tucker to tighten up some screws on both sides of the ball.

Colorado’s defense will get tested, especially in the run game. Last week against Colgate, the Falcons put up a staggering seven rushing touchdowns en route to a 48-7 victory. The Buffaloes can probably safely assume that Air Force will put the ball on the ground a good chunk of the time. The Falcons did share the workload last week, with four different players rushing for a touchdown. However, Falcons quarterback Donald Hammond III led the team in rushing three touchdowns. If CU can perform decently on defense, especially at stopping the run game, then they should be able to win this match without too much trouble.

Coming off of a huge week two win against Nebraska, the Buffs play host to their last non-conference game in the form of the Falcons. After such a thrilling win last week, I expect this game to be somewhat of an easy win for the Buffs. The Colorado offense saw its fair share of struggles last week, but came out during the second half with a new game plan, passing the ball. After a successful first-week run game failed to be replicated, the passing game stepped up and delivered when it mattered.

Where I can see the buffs having a problem this week is in defending the Falcon’s triple-option offense. Like many of my counterparts above me have written, the Falcons dismantled Colgate last week with a whopping seven rushing touchdowns. I expect Air Force to try and repeat the run game success they had last week, and force the Buffs defense to show all of their cards in defending the rushing game. If CU can step up on defense and force the Falcons to abandon the run game and use the passing game more, I can see the Buffs defense on the way to a 3-0 start, heading into Pac-12 play.

A week ago, we all experienced a game that will go down in CU history. After lagging behind the Cornhuskers 17-0 with one minute left in the third quarter, the team managed a comeback that fans was never expecting.

This week, the Colorado Buffaloes are going head-to-head with the Air Force Falcons. In their previous season, the Falcons averaged 30 points per game. Comparing that to the Buffs this season, it is no question that they can surpass the Falcons with their 43 point average. However, Sep. 7 proved that the upcoming game between CU and the Air Force Academy may be more difficult than anticipated. The Falcons beat Colgate 48-7 and with such a high scoring game it could prove worrisome for the Buffaloes moving into the weekend.

This Saturday will be the first time these teams have played since 1974. It will be a well-matched game but I believe CU will come out on top. Head coach Mel Tucker has been preparing for this game since the 2019 fall camp and after their victory against Nebraska, it will fuel the team even more to beat their long awaited rivals.

Air Force’s offensive style can be tough to prepare for, just ask seventh ranked Michigan, who needed overtime to knock off Army’s triple-option offense by a field goal. Colorado may get off to a slow start following a miraculous second half comeback against the Cornhuskers. If the Falcons are willing to mix the passing game into their triple-option attack, it could generate a few big plays against the Buffs’ secondary.

Coach Tucker has prepared his team since fall camp for the Air Force offensive attack. However, you can only do so much in practice to simulate what the Falcons’ offense will look like. The fullback run makes the offense for Air Force very efficient and tough to stop because there’s less space between the quarterback and eventual ball carrier. This means the full back can gain three to four yards in the blink of an eye.

Sophomore tailback Alex Fontenot and freshman tailback Jaren Mangham will be too much for the Air Force defense and will set up the vertical passing game with junior wide receivers’ Laviska Shenault Jr. and K.D. Nixon.

The Buffs will give up the first seven points to Air Force, but ultimately Colorado will win comfortably with the Falcons scoring a touchdown to pull within two possessions late in the fourth quarter.