The Rocky Mountain Showdown: The history and future of the mile high rivalry 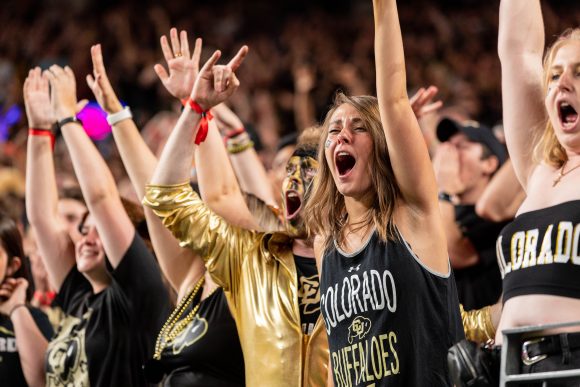 Students show their love for their football team by cheering them on during the third quarter of the Rocky Mountain Showdown. August 30, 2019 (Casey Paul / CU Independent)

For the last time at Mile High Stadium, the University of Colorado Buffaloes football team took the field against their in-state rivals, Colorado State University. With the Buffs winning this last matchup 52-31, CU got the last laugh in this Mile-High rivalry. But before fans look to what is next for the future of the competition, here is a look back at what made the game something special:

One of the most iconic showdowns was, of course, the first one in Denver, on Sept. 5, 1998, the games’ 70th edition. The Buffaloes set the tone for the future of the Denver series as the team dismantled CSU 42-14 while doubling them in total yards, 404-202.

But the Buffs certainly had some close calls in the past.

The 2007 game had a classic ending with CU’s kicker, Kevin Eberhart, making a field goal in the waning seconds of the fourth quarter, sending the game to overtime. It’s a move that won the Buffs the game 31-28.

The team’s final confrontation in Denver Friday night was a special game in its own right. In their 91st meeting, the Buffs and the Rams together set a new game scoring record with 83 total points. It also marked the beginning of CU’s new head coach Mel Tucker’s Colorado career.

One chapter of this rivalry has apparently come to an end, but the future of CU vs. CSU has the potential to be bright. While the thrill of competing in an NFL stadium may be gone, the Buffs will play the Rams next year in Fort Collins at the Rams’ new Canvas Stadium before the rivalry will be put on break until the 2023/24 season when the teams will trade-off home games in Boulder and Fort Collins respectively.

Colorado will look to earn its second rivalry win of the season next week against Nebraska at Folsom Field. Kickoff will be at 1:30 p.m. MST.