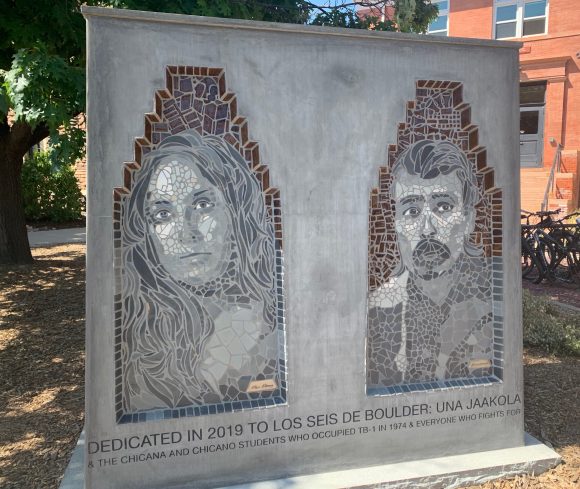 On Friday, Sept. 6, UMAS y MEXA de CU Boulder will dedicate a new sculpture on campus honoring the lives of six Chicano student activists and University of Colorado Boulder alumni who died in car bombings in 1974.

Federal Bureau of Investigations files on the case were lost, and no one was ever charged for the deaths.

UMAS y MEXA is a coalition organization formed in 1992 between the United Mexican American Students and Movimiento Estudiantil Chicanx de Aztlán. While the two groups maintain separate identities and constitutions, they work together to bring awareness on the CU Boulder campus to cultural social, political, and educational issues that affect Chicanas/os. The group hopes the new installation will bring awareness to this chapter in CU’s history.

The dedication will begin at 2 p.m. at the sculpture, located west of the Recreation Center outside Clare Small Arts and Sciences, for a performance from Lenny Foster, Grupo Azteca Tlahuitzcalli and the Denver Singers. At 3 p.m., students and community members will march from the sculpture to the Visual Arts Complex for refreshments and view a related exhibit. At 5:00 p.m., the film based on the students’ deaths, “Symbols of Resistance,” will be shown in the Center for Academic Success and Engagement (CASE) Auditorium.

More information can be found here.