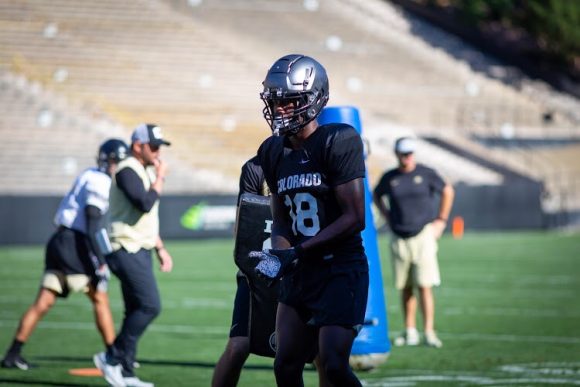 The 2019 University of Colorado football receiving group is going to make your jaw drop. Yes, we all know about the wonders of junior wide receivers Laviska Shenault Jr. and K.D. Nixon, but the guys next to and behind them are poised for greatness as well.

It is time to give senior wide receiver Tony Brown some more love. After transferring from Texas Tech his sophomore year, Brown finished third with the Buffs with 32 receptions and 333 yards last season. Along with Brown, sophomore wide receiver Jaylon Jackson just wants to make plays. He’s been looking up to the older guys for a little more vigor on the gridiron.

“It’s fun, they’re bringing energy every day and it helps everybody on the receiving core bring energy so you see these guys making plays, you want to make plays,” said Jackson, who played in five games with the Colorado Buffaloes last season. “They got a smile on their face, they’re dancing, and you know making plays. It’s always fun when you’re making plays.”

The growing chemistry on the squad isn’t just seen by Jackson. Brown admits the team often leans on each other for support and guidance through fall camp.

Also looking to make an impact this year will be sophomore wide receiver, Curtis Chiaverini. Filling a team with positive role players such as Chiaverini hopes to pay dividends throughout the year. The Boulder native has also seen the chemistry develop with this group.

“Every time one of us catches a ball we’re all yelling, getting hyped for each other when one of us scores we’re all running down and celebrating with our teammate,” Chiaverini said. “I feel like we just have a really good comradery with one another, and we just love seeing each other succeed, so that’s what I believe is going to propel us into the season.”

It’s no wonder why Chiaverini loves football so much. His father, Darrin Chiaverini, is CU’s assistant head coach and wide receiver specialist. Curtis Chiaverini admits his dad does not give him any extra breaks and is not afraid to call him out when necessary. Coach Chiaverini is pleased with the growth he has seen from the wide receivers this August but realizes the crew is still far from polished.

“I’ve seen them really compete against each other, the development’s been consistent throughout camp,” Coach Chiaverini said. “I’ve seen them make some big plays today but also have some inconsistencies, so we just continue to take that next step and get ourselves ready for that August 30 game. We have a lot of guys that have played football for us so I’m excited to see them when the lights come on and see them do what they do.”

What’s even more impressive is the leadership emerging from the group. Nixon and Brown, in particular, have been leading the group in their own ways.

“K.D. Nixon is definitely a leader, you see him trying to help the young guys, trying to work with the young guys,” Darrin Chiaverini said. “Tony Brown is more of a leader by example, he’s gonna do everything right, he’s gonna go out there and make plays and be consistent in his job, and so I’ve been excited to see those two guys step up for sure.”

K.D. Nixon was an integral part of the Buffs’ offense last season, especially when Shenault Jr. was down with his foot injury. Although Nixon couldn’t quite match Laviska’s thousand-yard receiving season, the junior did average an impressive 12.2 yards per catch.

Also looking to make an impact this season will be sophomore wide receiver and special teams standout, Daniel Arias. His only catch in 2018 was a touchdown against the Washington Huskies, but expect Arias to continue to make plays on special teams. The 6-foot-4 receiver set a Colorado record with 13 forced fair catches last season.

Not to be forgotten are the tight ends who had just 6 receptions in 2018, but with a new playbook under first-year offensive coordinator Jay Johnson, the group expects a little more of a role. Sophomore tight end Brady Russell is excited about a new offensive scheme.

On Aug. 10, the team held their first intrasquad scrimmage. According to head coach Mel Tucker, 22 different receivers caught a pass that day, an impressive statistic that Johnson was pleased to see.

“It’s always good obviously when you have more talented guys and hopefully it challenges the defense in a different parameter that they can’t focus in on one or two guys,” Johnson said. “I feel very confident, and I think that particularly the wide receiver group is very skilled and obviously they have demonstrated that so far.”

You can catch the Buffs’ receivers in action at Broncos Stadium at Mile High for the Rocky Mountain Showdown on August 30. As always, CU will be taking on Colorado State with kickoff at 8 p.m. MST.