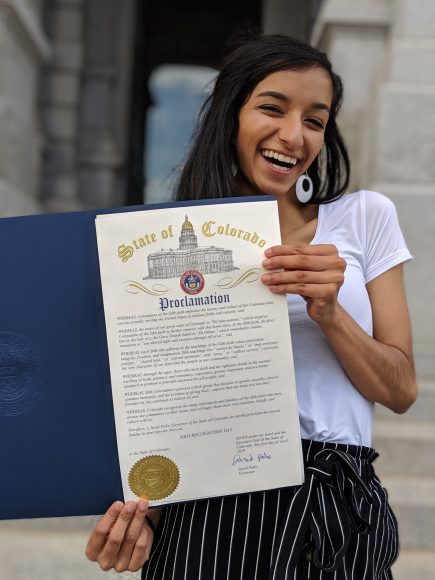 Sikh Recognition Day is now official in Colorado, thanks to the work of CU senior Serene Singh.

Governor Polis signed the pronouncement into law declaring the second Sunday of every April Sikh Recognition Day. The day falls during Vaisakhi, one of the most important historical and religious holidays of the Sikh faith.

Singh, who is co-president of CU’s Sikh Student Association and CU’s first female Rhodes Scholar, spearheaded the effort in order to give Sikhs a way to share their culture with others.

“How can we get more people to have an opportunity to learn about Sikhs?” Singh said, “How can we get all the Sikhs together in the Colorado community on a specific occasion to educate, to spread love, to spread our values and to challenge biases?”

That led her to come up with the idea of having a specific day recognizing Sikhs. She said it was a bipartisan effort. She was helped by Colorado Senate Majority Leader Steve Fenberg (D-Boulder) as well as her own representative, Shane Sandridge (R-Colorado Springs).

The proclamation compares Sikh teachings with Colorado values and recognizes Sikhs for enriching the state.

“Sikh Coloradans represent a faith group that focuses on gender equality, shared common humanity and the promise of giving back—aspects that our state was not only founded on, but continues to believe in,” the proclamation reads.

Singh hopes that Sikhs will use this day to “creatively challenges people’s biases” and invite others to learn more about Sikhism.

The Sikh Student Association at CU held a “Sikh week” earlier in April where they hosted Sikh speakers and held events on campus, including a turban tying even where students could practice tying their own turban and learn about the religious significance of the turban for Sikhs. Singh said that the group tied over 200 turbans at the event. The association also hosted the first langar at a Colorado university in the fall.

Sikhism is a religion that originated in the Punjab region of India in the 15th century. It is the fifth largest world religion, with roughly half a million adherents in the United States. There are four gurdwaras, Sikh houses of worship, in Colorado.

Sikhs have been victims of hate crimes and discrimination in the U.S., especially after 9/11. Some advocates have reported an increase in anti-Sikh discrimination since the 2016 election. Since Sikhs make up a very small percentage of the U.S. population, attacks are driven by xenophobia or a lack of understanding about what Sikhism represents.

In 2018, the Colorado Board of Education added Sikhism to its list of major world religions so that it can now be taught about in the state’s public schools. Sikhs hope that this will lead to a greater understanding of Sikhism in Colorado.