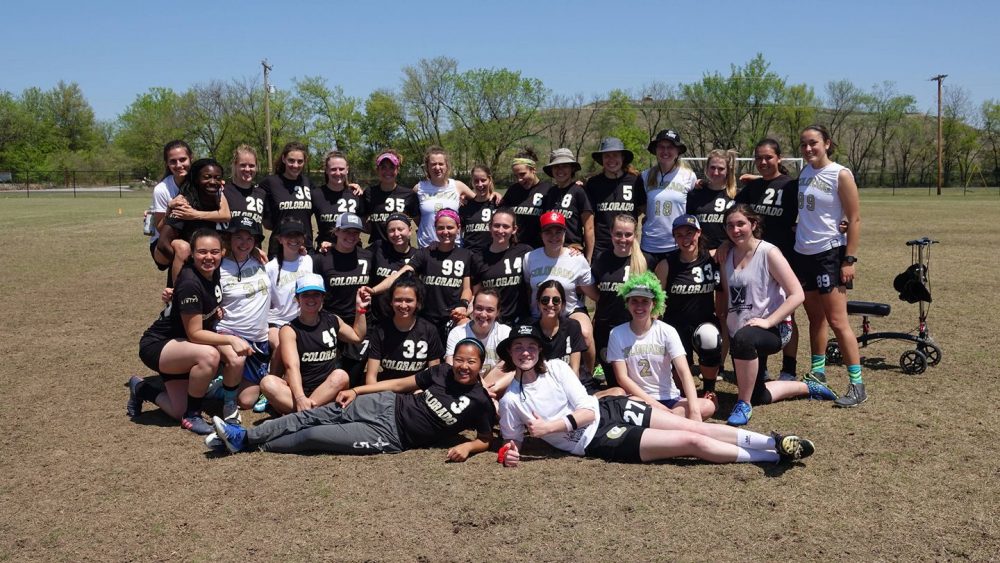 The CU Boulder women’s ultimate frisbee team — more commonly referred to by their team name, “Kali Ultimate” — traveled to Tulsa, Oklahoma for the South Central D-I College Women’s Regionals tournament on Saturday. The team is now headed to Nationals in Austin, Texas on May 24.

Just a few weekends ago, Kali Ultimate hosted the Rocky Mountain College Women’s ultimate tournament at Kittredge fields on Saturday, April 13 and had resounding success, which helped them to make the cut for the regional competition.

Instead of going by the Buffs, as most sports teams on campus do, Colorado’s team has chosen the name “Kali”. The name references a Hindu goddess who is known for being a divine protector and for her skills on the battlefield.

Colorado must have been channeling their inner Kali during the Rocky Mountain tournament, as they fought their way through the competition without too much of an issue. CU finished with a 5-0 record on the day.

The first contest of the tourney was against the University of Denver, and Kali quickly made it apparent that they were the better team. Colorado did not allow DU to get its first point until they were already up 5-0. Denver only managed to score two goals en route to falling to Kali, 11-2. Senior Brittany Bergstrom was satisfied with the win and credited a strong week in practice.

“On Monday, we did a lot of break throw and marking practice,” Bergstrom said. “We’re really trying to implement that, as well as making sure our marks are strong.”

Kali thorough preparation for the sectionals tournament showed in their first and only close game of the day against Colorado College.

The game started well for Kali as they jumped out to an early lead, but CC stayed close behind and was just one or two points behind Kali up until the last few minutes of the game, where CU stretched their lead out to three points. The game ended with a hard-fought 10-7 victory for Kali.

“CC is always one of our favorite teams to play,” Bergstrom said after the game. “They contest us and are a really good opponent.”

When asked about improvements the team could make prior to the regional tournament, Zoe Rath, another senior Kali member, said consistency will be key.

“I just think keeping the energy level consistent,” Rath said. “Because sometimes it’s a roller coaster — up and down — and just finding a good, consistent place to be at I think would do us a whole lot of good.”

Kali didn’t seem to have any issues with keeping the energy levels high. They easily handled their third game of the sectionals against Colorado State University, beating the Rams by a score of 9-1.

“It went well, we beat them,” said Bailey Shigley, another Kali ultimate teammate. “I think [the score] was a lot to one, which is really good, especially because CSU is a pretty good team. I think our intensity and energy was a lot higher in these games than they were in the first game. Also, our defense is a lot more aware, and things go well when we’re attacking them instead of just sitting back.”

CSU ultimately did not make the regionals tournament.

Colorado played their fourth game of the day against another member of the CU family, CU Denver. Kali did not hold back and thrashed their sister university, 11-0.

Some of Kali’s younger players got to see some solid playtime, which will be helpful down the line when Kali plays higher-tier teams.

“We have a lot of rookies, and we have been integrating them into both our offensive line and defensive lines really well,” Bergstrom said.

The fourth game allowed CU to give their freshmen and sophomore players some much-needed playing time. Younger teammates can be more effectively used during future tournaments to give other players rest when the team plays multiple games in one day. It can be hard to trust younger players during intense situations, but the more playing time, the better equipped they will be down the line.

Kali technically had a fifth game, but it was against their own B-team, and both teams decided to not play. By opting for rest instead, Kali got their fifth win of the day.

“I can genuinely say that everyone likes each other and is friends with each other, which has been just so much fun to be on a team like that,” Bergstrom said.

Kali and Colorado College, the first and second place teams at this tournament, represented the state of Colorado at regionals in Tulsa.

Kali played a total of four games during the first day of the tournament, taking on both the University of Texas-Dallas and UT-San Antonio before facing Texas State and then Colorado College to finish the first day. The full regionals schedule can be viewed here.