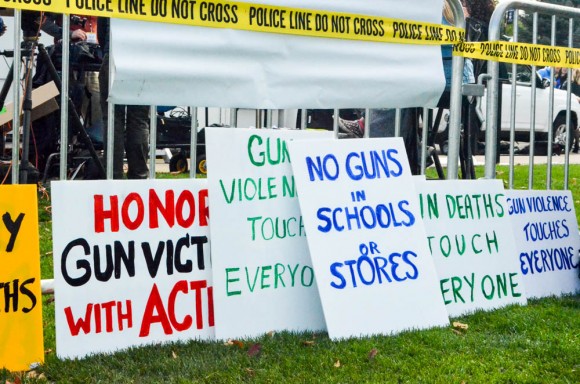 On April 20, 1999, 12 students and one teacher were killed at a school 40 miles from Boulder. Today, people all over Colorado and the nation are mourning the lives of those lost in the Columbine shooting and reflecting on what has been learned since then.

As the media adapts new guidelines for covering mass shootings and Colorado takes steps to prevent more events like Columbine from happening, progress is still slow when it comes to preventing gun violence at the national level. Mass shootings continue to kill and threaten students.

Just this week, hundreds of schools along the Front Range were closed as a massive manhunt took place for Sol Pais, a woman “obsessed with Columbine” who had flown from Florida to Colorado and purchased a gun. She was later found dead at the base of Mount Evans, just days before the anniversary of the deadly event. Sol Pais may be gone, but the incident reminded many of the long-reaching arm of Columbine.

Anniversaries of tragic events can put a spotlight on places like Columbine, “and not always in a good way,” said Liz Skewes, chair of the University of Colorado Boulder’s journalism department, in reference to Pais.

Skewes is currently conducting research into how the news media covers mass shootings, and believes that the shift from focusing mainly on the killers and their motives to focusing more on the victims and their experiences has been a positive. However, she said it’s still important to do reporting on what can lead someone to commit a mass shooting, “so we can know how to prevent it.”

Skewes said that anniversaries of mass shootings are a very raw time for those impacted, and that reporters need to be sensitive when interviewing victims, even if the actual event took place a long time ago.

“Time heals all wounds but this brings back painful memories for people,” she said.

Skewes also said that anniversary coverage has to have a clear journalistic purpose, and should serve to take the story forward in some way.

Many Colorado reporters who covered the tragedy are looking back on their work with new eyes. John Ingold, now a reporter for the Colorado Sun, wrote an op-ed reflecting on his time covering the shooting as an intern for the Rocky Mountain News. He shared how the shocking event took advantage of the media’s desire to explain the unexplainable, and unwittingly led them to create a narrative that would go on to inspire other killers.

“Even as it was happening, I remember a queasy feeling that the shooting had hacked the media’s impulses, turning what would ordinarily be good intentions into distorted versions,” Ingold wrote.

Gun control advocacy has gained increased focus since the shooting at a Parkland, Fla. high school last year that took the lives of 17 people. The incident fueled the March for Our Lives, with students at CU organizing a protest in solidarity with young people across the nation.

The University of Colorado allows faculty and staff to have concealed firearms on campus as long as they have a permit. A prior ban on guns was overturned in 2012 by the Colorado Supreme Court. When interviewed last year by the the CU Independent about guns on campus, students shared a range of opinions.

Earlier this month, Colorado passed a red flag law that will allow judges to temporarily remove firearms from people who are suspected of posing a risk to themselves or others. The law, which will go into effect in January, has been met with strong opposition from gun rights activists.

Beverly Kingston, director of the Center for the Study and Prevention of Violence (CSPV) at CU, said that she hopes the law will have an impact, but that there is currently little research into how effective these kinds of policies actually are.

The CSPV seeks to prevent school shootings and other kinds of violence by implementing evidence-based programs that have been proven to be effective in preventing violence.

“What we always say is ‘violence is a risk factor for gun violence,’” Kingston said when asked what risk factors drive people to commit mass shootings. “If we prevent violence it’s just going to make everything better.”

The CSPV focuses on preventing gun violence downstream by attempting to mitigate the risk factors that cause young people to commit violence. They also work on bystander training and helping people be informed about the warning signs for gun violence.

Kingston said she believes that “we have learned a lot” from Columbine and other shootings, and have developed better responses to dealing with violent incidents. She praised Colorado’s Safe2Tell system, which was implemented after Columbine as an anonymous way for students and others to report those who they believe might be at risk of committing violence. She said that the creation of threat assessment teams at schools have also been beneficial in helping young people get the support they need.

However, she added that resources for these programs are lacking and funding is not being provided to match the scale of the problem.

In the next 20 years she hopes to see a shift to start investing money “in proven strategies that are demonstrated to work.”

Kingston encouraged students who are concerned about gun violence to get involved in finding ways to make a difference in their communities. She said that while policy discussions about gun control are important, there are many other ways that young people can work to make their communities better and safer.

“I really believe it’s the young people who are going to turn this around,” she said.