Students at the University of Colorado Boulder protested Monday in opposition to the selection of a presidential candidate Mark Kennedy, whose conservative anti-LGBT voting record has sparked concern from students and the community.

Kennedy comes from a business background, and worked at the companies that became Macy’s and General Mills. From 2000 to 2007 he represented Minnesota as a Republican in the House of Representatives, where he had a very conservative voting record, including voting and cosponsoring bills to create a constitutional amendment defining marriage as between a man and a woman. He also voted against stem cell research, and in support of many anti-abortion laws, including restricting interstate travel for minors seeking abortions. He was rated 7% by the ACLU in terms of civil-rights policies and 0% by NARAL when it comes to support for higher education.

Protesters held signs with the phone numbers for Sue Sharkey, Regent chair, and John “Jack” Kroll, Regent vice chair, urging students to contact them with their criticism. Other posters had phrases such as “Kennedy skis in jeans” and “CU plus Mark Kennedy does not equal diversity.” 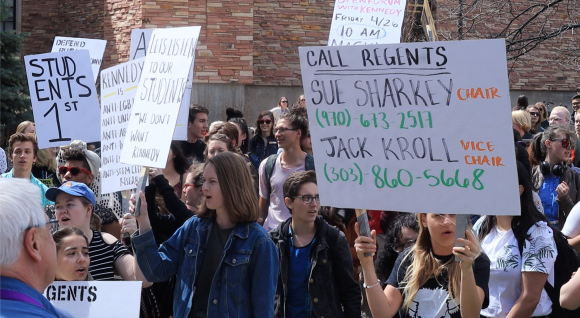 Around 100 students gathered on Norlin Quad to protest Kennedy and the Board of Regents. (Robert Tann/CU Independent)

“His voting record on pretty much everything I represent is abysmal,” said Natalie Sharp, who identifies as a queer woman of color. Sharp is a graduate student in creative writing, and held a sign saying “at least CU students know how to Google.”

The Board of Regents was heavily criticized for statements that came out following Kennedy’s announcement, in which Regents revealed that he was not fully vetted. One of the Regents said that the Board did not ask Kennedy about his political history during his interview.

“The University of Colorado system could do better than someone with this history,” said graduate student Andrew Guttman. “We think we deserve a leader who has a past to be proud of, a career to be touted, not hid from and apologized for.”

Kennedy wrote an open letter to the university on Friday where he said that his views on same-sex marriage had “evolved” since his time in Congress, and that he would vote differently today. However, some students are skeptical of the claim.

“As a member of the LGBT community I am tired of people who have contributed to rampant homophobia in politics simply saying they have evolved,” said CU student Victoria Acuña, addressing the crowd. 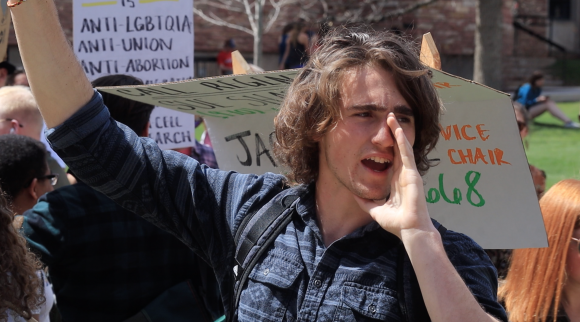 One former regent was there in support of the protest. Bob Sievers, 84, represented Boulder’s Congressional district on the Board of Regents from 1990-2002.

“There’s a pretty strong desire [among the students] to see more than one candidate,” Sievers said. “So I’m adding my small voice to those who worry about how the vetting is going.”

“We need to make sure that Mark Kennedy is thoroughly vetted if he becomes president,” said CU law student Pardeep Singh Badhesha.

Students and faculty were frustrated that only one candidate was named, and the other finalists were kept secret from the public. And while the Board doesn’t vote on whether or not to confirm the finalist until two more weeks, he appears to have resigned from UND, and many in the community feel that the decision period is just a formality.

“I’ve been on many search committees and I know that when there’s only one candidate it’s pretty much a done deal,” said CU English professor Julie Carr. Carr helped draft an open letter to the Regents voicing concerns about Kennedy’s record that gained almost 5,000 signatures.

But not all students are against Kennedy’s nomination.

“My main concern is everyone is using his legislative history to oppose his nomination,” said Konrad Schreier, the law school representative on CU’s student government. “If you’re just using his Congressional record it sounds like too much of a political litmus test, and since this is a public university I don’t think that’s appropriate at all.”

CU spokesperson Deborah Mendez-Wilson told the CUI that “our campus supports free expression as outlined in Regent Policy, and our students are welcome to express their points of view. We are pleased that our community will be given the opportunity to hear directly from candidate Mark Kennedy on April 26.”

Kennedy will visit CU for an open forum on April 26 as part of his tour of the CU system. Students are planning another protest for when he arrives.